In Chapter II of Olga Tokarczuk's Drive Your Plow over the Bones of the Dead, one finds

With age, many men come down with testosterone autism,  the symptoms of which are a gradual decline in social intelligence and capacity for interpersonal communication, as well as a reduced ability to formulate thoughts. The Person beset by this Ailment becomes taciturn and appears to be lost in contemplation. He develops an interest in various Tools and machinery, and he's drawn to the Second World War and the biographies of famous people, mainly politicians and villains. His capacity to read novels almost entirely vanishes; testosterone autism disturbs the character's psychological understanding.

Well, that's one way to forestall objections by the grouchy old fellow in the neighborhood book club who doesn't like the novel.

In reviewing Eric Partridge's etymological dictionary Origins, Jacques Barzun put the matter differently when remarking on the taste for works of reference that grows with age:

This is not so crabbed and fossilized as it sounds. It does not mean that one is incapable of enthusiasm for a new novel or book of poems. What it means that it has taken forty or fifty years to pursue and possess the great works of world literature, to discover the no less great works that by accident or perversity only a few recognize, and to pick out from the confetti of one's own times the few precious pieces that define not so much one's mind or taste as one's direction. What more is one offered? In spite of all generous illusions to the contrary, it is not true that a masterpiece in every genre is published every seven days. Only a weekly reviewer believes that, and even he believes it only on the seventh day. From which it follows that in privileged lives, free from reviewer's cramp, the intensity of response to new fiction, new poetry, new philosophy, new criticism, and new histories cannot help being tempered with the years. In compensation, the judgment grows stronger, buttressed as it is by the great piles of octavos incorporated into one's fabric. To have a library of 25,000 volumes under one's belt is a sobering cargo, even if most of them are mere bulk. The eye of the seasoned reader, without being lackluster, is generally hooded, and the mind, if could be seen, would betray as regards the last sweet published thing a daunting serenity.

("A Search for Roots", collected in A Word or Two Before You Go.)

I have been reading for about sixty years now, and must say that I have never read anything like the 400 volumes per year that would be required to approach the 25 thousand mark. Still, I recognize something of the tendency in myself.

Posted by George at 3:19 AM No comments:

Yesterday, the Fourth Sunday of Advent, the Gospel reading was from Luke 1:26-38. Msgr. Ronald Jameson, rector of the Cathedral of St. Matthew the Apostle, mentioned in his homily an Annunciation by the African-American painter Henry Tanner, on display at the Philadelphia Museum of Art. It is a very striking painting, not in the manner of any European Annunciations that I recall: 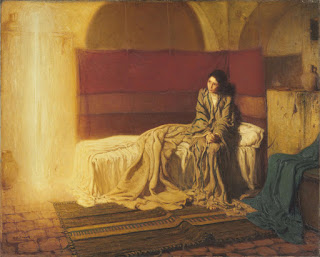 Tanner's portrait of his mother, also at the Philadelphia Museum of Art, is worth a close look as well. I don't remember seeing Tanner's work elsewhere. I find that the National Gallery of Art has three of his works, two in the recently acquired Corcoran Gallery of Art, and none on view.

The National Gallery of Art does give an interesting account of Tanner's life.

A Story Unknown or Not

Today's New York Times Book Review includes a review of The Lenin Plot: The Unknown Story of America's War Against Russia by Barnes Carr. I would not have called the story unknown, but the reviewer seems to consider it so. The second paragraph of the review says

But one would be hard pressed to find anything about this conflict in official United States documents, or even American military history books, ....

Having read George F. Kennan's The Decision to Intervene, I thought that simply wrong. I find that the select bibliography to this work includes several volumes of The U.S. State Department's Documents Relating to the Foreign Relations of the United States, notably three volumes covering the relations with Russia in 1918, all available for viewing on-line:

And it took little time to discover that in 2019 the U.S. Army's Center for Military History brought out The Russian Expeditions: 1917-1920, a concise pamphlet, freely downloadable.

Carr's book may be excellent, and the subtitle may be the work of his publisher's marketing department. Still, I think the reviewer was incautious in accepting its premise.

In the essay "The Law of Mind", C.S. Pierce gives a couple of examples of "hypothetic inference", or "an induction from qualities". The first describes how he might tell that a chance stranger met on a train is a "mugwump". The term "mugwump" has as far as I know been obsolete for a century and more. In the late 19th Century, it meant someone who thought himself above party politics. One conjecture traces it back to an Algonquin word or expression meaning something like "a great man". A jocular etymology spoke of a bird with its mug on one side of a fence and its rump on the other. I doubt that the term appears in Santayana's explicitly philosophical work, or in William James's.

In the essay that preceded "The Law of Mind", "The Architecture of Theories", Pierce wrote of John Stuart Mill giving a "socdolager" to some theory. This term I remember seeing in print once before, where it appeared to mean something like "a great product". The OED gives it as originally meaning a knock-out blow. It is American, and the OED could offer early references but could not suggest its derivation.

I suppose that many works of philosophy must include similarly colloquial usages. Unfortunately, I know no language other than English (American English) well enough to detect them. Some, if one goes far enough back, must be lost to history for want of contemporary comments.

Posted by George at 3:09 PM No comments:

By now, I have software installed on this machine for four on-line meeting programs: AT&T GoToMeeting, Cisco Webex, Microsoft Teams, and Zoom. There is also Google Meet, but that runs in the Chrome browser and does not require separate installation. On Monday I managed to use three of them, starting at 9:00 a.m. with Zoom and ending a Webex meeting at about 7:30 p.m. How did I miss out on Google Meet and Microsoft Teams?

Yesterday the count fell off to just Zoom and GoToMeeting. To make up for that, there were three Zoom meetings at work, followed by ESL over Zoom in the evening.

One of Novalis's dialogues begins

A. The catalogue from the book fair?
B. Still damp from the press.
A. What a mass of letters--what a monstrous birth of the times!
B. You appear to belong to the sect of Omarists, if I may call it after its most efficient adherent.
A. You really wish to be the eulogist of this epidemic of books?
B. Why the eulogist? But really I am pleased by the annual increase in the trade--the export brings only honor, the import sheer profit.

"B" gets the better arguments, and clearly speaks for Novalis, who after all was an author. "A" does get the specious argument that

A whole made up of sorry parts is itself sorry, or rather no whole. Now, if it were a thought-out progress? If every book filled a gap somewhere--and likewise every fair was a systematic part in a chain of learning? Then every fair would be an epoch, and finally there would arise in appropriate steps a complete path to the ideal education. A systematic catalog of that sort--how much slimmer in volume and heavier in weight!

Many of us have felt as much, but the desire for a systematic catalogue can hinder one. The reader who waits for a guarantee that the next book is the right book will miss a lot of interesting reading. I think that I did too much of that, holding off on reading book x because I had heard book y was better, and then finding some other excuse for not reading book y. It is better to take up the book and read, to the limits of one's interest and patience.

(I have read that Omar is wrongly blamed for destroying the contents of the great library of Alexandria: there is no sound evidence to say when they were lost.)

I would have supposed from The War Between the Tates that Lurie was somewhat younger; but on reflection that was careless reading. The book is set about 1967, and the main characters are about 40. Foreign Affairs is set about 1980, and the leading character is fifty or in her early fifties. That character, Vinnie Minor, is an academic and authority on children's literature, as Lurie was.

The obituary says that the obnoxious literary critic Leonard Zimmern turns up in The War Between the Tates, though I remember him only from Foreign Affairs; he turns up also in a couple of other novels that I have not read. On reflection, I knew which minor character he must have been in The War. But he gave Vinnie Miner a bad review shortly before the beginning of Foreign Affairs, and in a memorable scene she sits in the London Zoo and imagines one of the polar bears repeatedly dunking him. Given how writers have dealt with obnoxious critics, Lurie/Miner left him off easy.