It is time again for monkshood, maybe a bit past the prime. Anyway, from last weekend here is the monkshood in our back yard 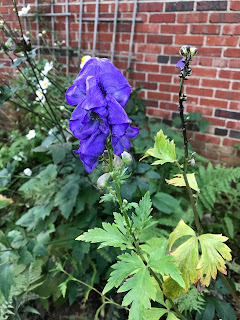 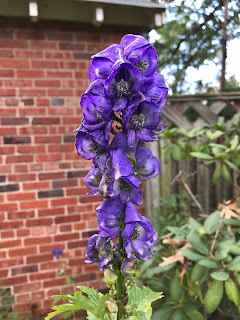 and down the street 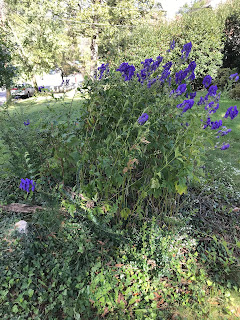 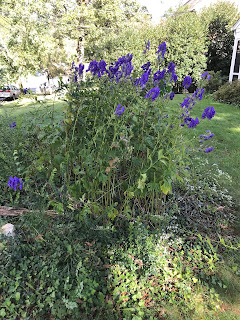 I gather that it is not quite as dangerous on skin contact as I once thought: the consequence is likely to be discomfort but nothing worse. Still, I think we will warn the people who have bought but not moved into the house down the street.
Posted by George at 6:02 PM No comments:

Last month, Second Story Books reached its 40th anniversary of operation at Dupont Circle. It marked the occasion with a contest and with pop-up sales. The latter I missed, because they were announced on social media. The former was framed as


Send us a list of books (at least four books but no more than forty) that you wish everyone might read to make the world a better place. Please tell us (briefly or at length) why the books on your list make a difference. A panel of judges will select the most noteworthy entries in September.

The notion that everyone (however "everyone" is defined)  might read something between four and forty books seems impractical to me, judging by my experience of schools, book clubs, and life in general, where reading is often scanted. The notion that the said books might make the world a better place should everyone read them seems pretty speculative too.

Having said that, I am grateful to Second Story Books. It seems to me to have made Washington a better place by its operation. I am grateful also for the many books it has sold me over the years. I hope it will have another forty years at 20th and P Sts., NW.
Posted by George at 4:09 PM 4 comments:

There was a kerfluffle some months ago, forgotten by now thanks to new and improved kerfluffles that followed it. At the time it made a bit of noise for a few days. A national publication put out a piece weighing the rights and wrong. The publication concluded that the rights were on the side it favored, the wrongs on the other.

It struck me at the time that this was a straightforward syllogism:
The name of the publication does not matter, for many opposed to it on that and other occasions use the same syllogism regularly.

It is a handy one. Perhaps it could be printed on a card, so that one could carry it about in the wallet for reference, as one might the Red Cross cards outlining the steps to take in rendering first aid..
Posted by George at 4:31 PM No comments:

In our suburb of Cleveland we were friends with a woman who had emigrated from Bavaria about 1910. She lived in a rowhouse (I think) with (certainly) grape vines trained along the rails of her back porch, a patch of vegetables including kale, and shelves of Reader's Digest Condensed Books. I had no opinions then on condensing books, and I got through quite a few of the multi-book volumes.

This past weekend, the used book sale at a local church yielded a copy of The Captain, by Jan de Hartog. I read this in condensed form probably in 1967 or 1968, for it was published in 1966, Reader's Digest published the condensed version in 1967,  and my family left Ohio in the summer of 1969. It had been my impression that Reader's Digest called it Master After God, an expression that occurs in the book; but that is not so. Anyway, I decided that it was worth the $2 asked.

The bulk of the novel concerns the trials of a Dutch tugboat captain: first as relief captain on coastal tows off wartime England; then on a tug outfitted for rescue work on a couple of Murmansk convoys. I found in reading it that I probably remembered 70% of the plot. I believe that the prologue and epilogue, set in the 1960s were omitted by the condensers. Some of the matter from the 1930s may have been skipped as well. At least one sex scene made the cut, but I think other such bits certainly didn't.

Curiously, almost the only other book that I have reread at a comparable interval is Two Years Before the Mast; yet I don't know that I have ever been out of sight of land on a boat. De Hartog does not hold up as well as Dana, but he undertook a different task: not a narrative of sea service, but a novel, and a novel with a moral message embedded or tacked on. Would I purchase the book now if it had just been published? I suppose that the decision would depend on reviews, blurbs, and my schedule.  Will I read it again? Probably not.

I admire authors of conspicuous erudition, who seem to have read everything relevant, and to have apposite quotations in easy reach as they write: Barzun, Friedell, Pelikan, and Schopenhauer come to mind. Though I have no possibility of matching their reading, yet I imagine it as involving not only labor but fascination. Reason says that they must have made their way through some awfully dull stretches of history, theology, philosophy, and literature: imagination is happy to remember the Xenophons, Augustines, Platos, and Shakespeares as if they made up a greater proportion of the reading than they must have.

Samuel Schoenbaum's Shakespeare's Lives is another work of astonishing erudition. Yet here the dull comes to the foreground regularly, and one regularly encounters biographers mad or just tedious who had the energy to write thousand-page books. At the the bottom of page 427, one encounters


Similar theories are expounded, in much the same judicial tone, in John H.Stotsenburg's depressingly long An Impartial Survey of the Shakespeare Title (1904).

About two-thirds of down page 427 is


Usually associated with the Baconian stalwarts, Sir George Greenwood (in his dauntingly  voluminous writings) more than once denies membership in the club.


Canon Gerald H. Rendall, sometime Gladstone Professor of Greek at University College, Liverpool, [who] read Looney and, at the age of eighty, experienced a conversion [to the Oxfordian cause]. He proceeded to advance the cause with a series of volumes: Shakespeare Sonnets and Edward De Vere (1930), Shake-speare: Handwriting and Spelling (1931), Personal Clues in Shakespeare Poems & Sonnets (1934), and Ben Johnson and the First Folio Edition of Shakespeare's Plays (1936). So prodigious was the display of energy that one admirer was prompted to exclaim in 1944 that Canon Rendall  'represents one of the biological reasons why the Germans, despite all their sound and fury, will never overcome the British.'

Even the sane and level headed wrote at great length. E. K. Chambers, who was not mad, wrong-headed, or, I gather, on the whole tedious, might speak for many:


Contemplating the two volumes, which run to over a thousand pages he confessed, 'I have not found it possible to use quite that brevity of words which the confident surmise of youth anticipated.

Schoenbaum did not contract prolixity from his mad or long-winded subjects. What he writes is to the point and lucid. Yet he required almost six hundred pages for the book. Near the end I thought I detected signs of weariness: references to books not previously named or named in passing, perhaps more typographical errors left to stand. If I projected the weariness I felt onto the energetic author, his shade has my apologies.

It is a remarkable book, one that I am glad to have read. I don't know that I need to read it again. Perhaps Schoenbaum's Shakespeare: A Compact Documentary Life would contain much of what I wish to know, and take up less space on the shelves.