Anna Comnena's Alexiad contains many interesting stories, among them those concerning Robert Guiscard and his son Bohemond. The death of the former in 1085 she recounts as follows:


... while he was still waiting near Ather (a promontory of [Kephalonia]), he was attacked by a violent fever. Unable to bear the burning heat, he asked for some cold water. His men, who had scattered everywhere in search of water, were told by a native: 'You see the island of Ithaka there. On it a great city was built long ago called Jerusalem, now in ruins through the  passage of time. There was a spring there which always gave cold drinkable water.' Robert, hearing this, was at once seized with great dread, for a long time before some persons had uttered a prophecy (the kind of prediction sycophants usually make to the great): 'As far as Ather you will subdue everything, but on your way from there to Jerusalem, you will obey the claims of necessity.' Whether it was the fever that carried him off, or whether he suffered from pleurisy, I cannot say with certainty. He lingered on for six days and then died.

This sounded curious familiar, like something I had read before. And of course I had, in Henry IV, Part 2, Act IV, scene 5:


Doth any name particular belong
Unto the lodging where I first did swoon?


Laud be to God! even there my life must end.
It hath been prophesied to me many years,
I should not die but in Jerusalem;
Which vainly I supposed the Holy Land:
But bear me to that chamber; there I'll lie;
In that Jerusalem shall Harry die.
Exeunt

I suppose the pattern falls more generally into the deceptive prophecy pattern--Macbeth invincible until Birnam Wood should come to Dunsinane, and so on.

Anna Comnena is well worth reading. Her accounts of the campaigns of her father Alexius I recall now and then Musil's observation that (like every other state) Austria-Hungary had won every war it had ever engaged in, but unfortunately most of them had ended with it giving up some territory. Yet one can look at the results and make allowances.
Posted by George at 3:43 PM No comments:

In the essay on Gianfranco Contini in Cultural Amnesia, Clive James writes that


Even before my first celebrated classroom appearance as Lady Macbeth shrilly demanding that her milk be taken for gall, I had the shape, weight, and length of iambic pentameter in my mind, as a sort of sonic template. A long time later, in Cambridge, I abruptly realized what a blessing this early inculcation had been. In the practical criticism classes, the American affiliated students were incomparably better informed than the locals--incomparably more intelligent all round, to put it bluntly--but the one thing the Americans could not do to save their lives was recite the verse in front of them. Whether it was by Donne, Herbert, Fulke Greville, Lovelace, Marvell or Dryden, it came out like a newsflash being read sight unseen by Dan Rather. They had no feeling for a line of iambic pentameter whatever. On their being quizzed about this, it transpired that they had never been required to remember one.

I don't know that I was ever required to learn any poem by heart other than "Sea-Fever" by John Masefield. Yet there are a number of poems I did so learn, some of which I remember better than "Sea-Fever". Whether my recital of "Whoso List to Hunt" (which I find would be inaccurate here and there) would be up to Cambridge standards, I can't say.

The American poet John Hollander, who died this week, published in 1996 the anthology Committed to Memory: 100 Best Poems to Memorize. Hollander divided the poems as Sonnets, Songs, Counsels, Tales, and Meditations. I bought the book at a school book fair; another father, to whom I pointed it out, said the he'd buy it if it contained "If"; it did, under Counsels. As I recall, it was was "Mnemosyne" that sold me. Committed to Memory is a fine book to have around the house; unfortunately it seems to be out of print.

Posted by George at 6:03 PM No comments:

According to the guidebooks, the Three Smiths statue in downtown Helsinki commemorates the Finnish workers who contributed the money needed to build the university's student union: 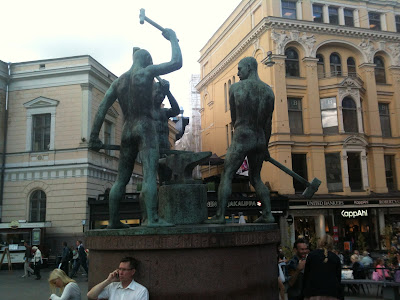 But since the smiths are naked, it seems to be me suited to illustrate Job 5:7, "but man is born to trouble as the sparks fly upward."

And at St. John's Church, I noticed some gargoyles. In honor of Jeff Sypeck, here they are-- 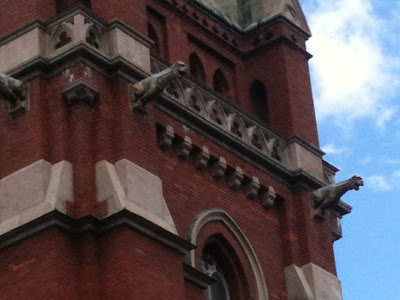 For the editors among us: 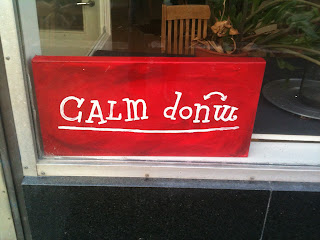 Implying that there's a difference? 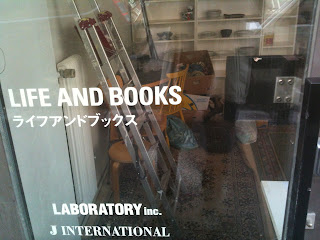 I'm not sure what Food Philosophy is. E.W. Dijkstra's "dining philosophers"  problem does involve a plate of spaghetti, but a) would the restaurant tolerate five philosophers around one plate, and b) would the local health authorities tolerate such utensil sharing? 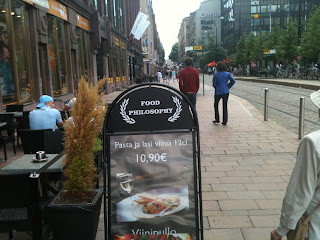 Posted by George at 3:28 PM No comments:

A couple of years ago, I was pleased to see that NYRB had brought John Williams's novel Stoner back into print. I have since seen items here and there indicating that the book is admired elsewhere in the English-speaking world. But I was surprised, the other week at Schiphol to find 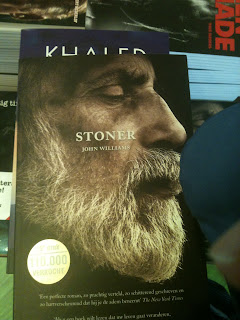 that is to say, a Dutch translation, and still more impressed to find on the other side of the table 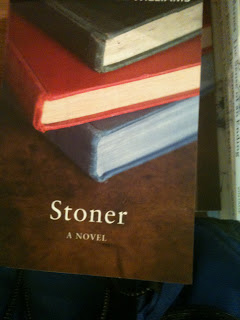 the English version. There were about 50 titles on the table, two thirds Dutch, one third English. Baldacci and Brown had more titles, but I thought it a very good showing.

Posted by George at 4:56 PM No comments:


Mr O'Connor's book is good in parts, and in parts very good. Some of it is interesting, for reasons unknown to Mr O'Connor....
Mr O'Connor's is a clinical attitude. He tries to suggest that his relationship with these people is that of a scientist examining his specimens. Personally I am by no means so persuaded. I think the specimens have analytic powers at least as good as Mr O'Connor's but functioning much more efficiently, since the specimens are at home in their own kitchen, dressed soberly according to their station, quite at ease and with judgment unimpaired by superciliousness. What was said after Mr O'Connor left?
That is the snag in all egocentric writing. Its incompleteness is mortifying. Having read the book, why cannot the reader read the Other Book?

Further Cuttings is not consistently as good as The Best of Myles, but bits and pieces--some of the criticism, the monologues and dialogues are.