The summer is gone, and I have done nothing of what I intended. My time is now absorbed--1. In the mornings, minutes of Thomson's translation of the Septuagint Bible. 2. In teaching my granddaughter to read; a task to which I devote from two to three hours of every day. 3. In the exercise of my garden and nursery, an average of two hours more. 4. My diary, one hour. 5. Correspondence, two hours. 6. Miscellaneous reading, two hours. There are twelve: seven in bed, three at and after meals, and two wasted. This wasted time I have found by constant experience to be as indispensable as sleep. It cannot be employed in reading, nor even in thinking upon any serious subject. I must be wasted upon trifles--doing nothing. The string of the bow must be slackened, and the bow itself laid aside.

Adams was then, and through the rest of life, a member of Congress; but Congressional sessions were much shorter than they later became, and he was at home in Quincy, Massachusetts.

Posted by George at 2:09 PM No comments:

On the radio today, some historian was saying cold things about the military abilities of Braxton Bragg. This could be well the first time Bragg was mentioned on NPR since its founding. Of course the program was discussing the proposal to rename a number of US military installations named for generals of the Confederate army, Fort Bragg in North Carolina being one. My own reading on the matter is quite limited, but none of it has contradicted this historian's poor ranking of Bragg.

The United States Army before the Civil War, the "old army", was quite small, and opposing generals commonly had known each other for a dozen or twenty years. In his memoirs, U.S. Grant writes of Bragg that


Bragg was a remarkably intelligent and well-informed man, professionally and otherwise. He was also thoroughly upright. But he was possessed of an irascible temper, and was naturally disputatious. A man of the highest moral character and the most correct habits, yet in the old army he was in frequent trouble. As a subordinate he was always on the lookout to catch his commanding officer infringing his prerogatives; as a post commander he was equally vigilant to detect the slightest neglect, even of the most trivial order.
I have heard in the old army an anecdote very characteristic of Bragg. On one occasion, when stationed at a post of several companies commanded by a field officer, he was himself commanding one of the companies and at the same time acting as post quartermaster and commissary. He was first lieutenant at the time, but his captain was detached on other duty. As commander of the company he made a requisition upon the quartermaster--himself--for something he wanted. As quartermaster he declined to fill the requisition, and endorsed on the back of it his reasons for so doing. As company commander he responded to this, urging that his requisition called for nothing but what he was entitled to, and that it was the duty of the quartermaster to fill it. As quartermaster he still persisted that he was right. In this condition of affairs Bragg referred the whole matter to the commanding officer of the post. The latter, when he saw the nature of the matter referred, exclaimed: "My God, Mr. Bragg, you have quarrelled with every officer in the army, and now you are quarrelling with yourself!"

In his memoirs, Sherman touches on Bragg's irascibility:


I knew that Bragg hated [Jefferson] Davis bitterly, and that he had resigned from the army in 1855, or 1856, because Davis, as Secretary of War, had ordered him, with his battery, from Jefferson Barracks, Missouri, to Fort Smith or Fort Washita, in the Indian country, as Bragg expressed it, "to chase Indians with six-pounders."

Sherman had just resigned as head of the Louisiana Seminary of Learning and Military Academy--the ancestor of Louisiana State University--upon Louisiana's secession from the United States. At the time of the conversation this recollection was attached to, he was in New Orleans about to leave for Ohio.
Posted by George at 2:25 PM No comments:

In The Radetzky March, Joseph Roth gives a cameo appearance to a Count Sternberg, a cavalry officer


through whose brain thoughts would would shoot one at a time like lone birds through empty clouds, without brethren and leaving no trace

In  the Theatetus, Socrates uses the metaphor of knowledge and birds:


Now see whether it is possible in the same way for one who possesses knowledge not to have it, as, for instance, if a man should catch wild birds--pigeons or the like--and should arrange an aviary at home and keep them in it, we might in a way assert that he always has them because he possesses them, might we not?
And yet in another way that he has none of them, but that he has acquired power over them, since he has brought them under his control in his own enclosure, to take them and hold them whenever he likes, but catching which ever bird he pleases, and to let them go again; and he can do this as often as he sees fit...
... so now let us make in each soul an aviary stocked with all sorts of birds, some in flocks apart from the rest, others in small groups, and some solitary, flying hither and thither among them all.

Should Count Sternberg have hired a bird-catcher? The profession can hardly have died out with Papageno.
Posted by George at 2:43 PM No comments:

Some years ago, I bought a copy of The Idea of a University, edited by Frank M. Turner for Yale University Press. Within the last year, having read Ian Ker's biography of Newman, I looked into it for some of the lectures on university subjects: Newman first published the Lectures and Essays on University Subjects as a separate volume, but then incorporated them in later editions of The Idea of a University. I found that the volume had four of the ten, with the remark that


Publication of the entire text of the Lectures and Essays on University Subjects would have been economically prohibitive.

A bit of looking about showed that Notre Dame Press still has available Martin J. Svaglic's edition of The Idea of a University, which gives all ten of the lectures. The series in which the volume came out is I believe discontinued, but Notre Dame Press will still sell you the book.

Having bought Notre Dame's edition, I have to say that Yale's made a judicious choice among the lectures on university subjects. Among those it omits, the essay on University Preaching, taken to heart, might much improve Roman Catholic homiletics in the United States; but it is far more about preaching than about the university.  The essay on Christianity and Medical Science is worth reading; but again, hardly bearing on the university. Though the essays on Elementary Studies are amusing, they aren't ones that I'm likely to reread. "Discipline of Mind: An Address to the Evening Classes" is worth reading, yet the meat of its argument is found in "Knowledge Viewed in Relation to Learning" in The Idea of a University proper.

On the other hand, Yale does give one a good hundred pages of "interpretive essays" of varying interest. One or two I could happily spare for one of the omitted lectures or essays by Newman.

It it to Yale's credit that it carries its end notes through to the end of the essays. Notre Dame Press pleads want of space in ending the notes after The Idea of a University proper.  If you want a translation of

a line from Virgil that appears in the second lecture on English Catholic Literature, you will need the notes of Yale's edition ("strange leaves and fruits not their own").

Posted by George at 2:20 PM No comments:

Having taken Heart's Needle from the shelves to verify the lines from April Inventory, I noticed a stanza in the poem Ten Days Leave:


But no; it seems just like it seemed. His folks
Pursue their lives like toy trains on a track.
He can foresee each of his father's jokes
Like words in some old movie that's come back.

Well, as my brother says, there are no jokes like Dad jokes. But I wonder whether the daughter addressed in the sequence Heart's Needle grew up to quote those lines back to him. I hope so.
Posted by George at 6:36 PM No comments:

Long ago, probably in an anthology, I read the opening lines of W.D. Snodgrass's poem April Inventory:


The green catalpa tree has turned
All white; the cherry blooms once more.

I had not then seen a catalpa, for I grew up outside their range. I was considerably older when we moved to this neighborhood, where catalpas grow here and there.

The Audobon Society's field guide to eastern trees says that catalpas bloom in late spring. In Washington, this seems to mean late May. The cherries here bloom about six weeks before that. I suspect that Snodgrass wrote for the meter and not for the calendar.

But Snodgrass was correct to suggest the striking look of a catalpa in bloom. Here is a southern catalpa a block away, in pictures from different years: 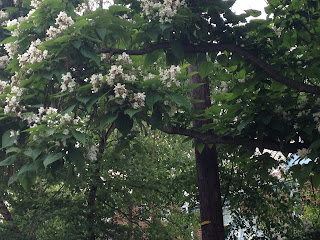 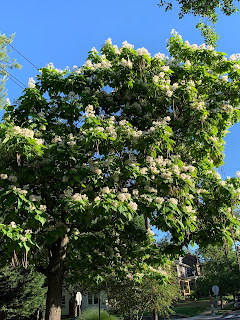 Snodgrass included April Inventory in  Heart's Needle,  a collection that won him the Pulitzer Prize. It appears that one can still find those poems in Not for Specialists, the title of which consists of the last three words of April Inventory.
Posted by George at 10:58 AM No comments: