On the first Friday of June, an errand took us to Bethesda, where we meant also to see a movie. We had some time between errand and movie, which we used to look into the Barnes and Noble at Woodmont and Bethesda Avenues. There we bought several books, among them The Guns at Last Light by Rick Atkinson, the last of his "Liberation Trilogy" on the US Army's campaigns in the North Africa and Europe during World War II. It was only later that I noticed how tidy it was to have bought the book on the 70th anniversary of D-Day.

I finished the book in four or five days. It helped, of course, that I know how the story comes out, knew even the broad outlines of Huertgen Forest, the Colmar Pocket, etc. But Atkinson writes plainly and clearly, for one thing. For another, the story remains absorbing for those of us who grew up when most of the fathers around had been under arms during World War II.

I am no historian. Yet Atkinson's judgments in the trilogy have mostly matched what I read elsewhere, in Moorhead, Weigley, Keegan, Howard, and others. I believe that he has his facts down, and that his judgments are generally sound.

He writes well, a few annoying tics set aside. He has the weakness for the occasional foreign word in italics: gefreiter, frere, resistant. His thumbnail characterizations of his generals (and a few noted field or company officers and NCOs, for example Audie Murphy) recall Ernie Pyle at best, Time Magazine at worst. Allied forces figure only to the extent that they affect American actions--the action on Sword, Gold, and Juno beaches in 1944 gets very little more attention than the British operations on Walcheren Island in 1809; that is  a reasonable choice, given that he is writing about the US Army, but occasionally it is distracting.

I am glad to have read it. I'm not sure what happened to my copy of An Army at Dawn, the first volume of the trilogy, but probably I gave it to my brother. I gave away the second volume of the trilogy, The Day of Battle, about the Italian campaign, in part because I found it too tempting to re-read. I may give away The Guns at Last Light on the same grounds.
Posted by George at 4:57 PM 1 comment:

Probably It Is the Humidity

We spent most of Saturday through Tuesday in New Orleans. I have long become accustomed to the summers around Washington, DC, and thought myself pretty tough because of that. But now and then I go south in the summer, and discover I'm not. In Atlanta, years ago, I thought it was the heat. In New Orleans, I'm fairly sure that it was the humidity: the reported temperatures were even with those in Washington, yet I was more uncomfortable than I would have been here.

I did enjoy the visit. I got to poke around a few bookstores. I picked up a copy of Jacques Barzun's A Word or Two Before You Go at Crescent City Books (which does not want Google Glasses or firearms on premises). I admired the density of books at Arcadia Books, though wondering whether someday a patron or employee will be buried in an avalanche, and  deciding that I didn't have suitcase room for some Pleiade volumes. I decided against a signed cop[y of The Poison Pen at Faulkner House Books. And I saw a bit of the city otherwise.

On Carondelet Street, I noticed an odd juxtaposition: 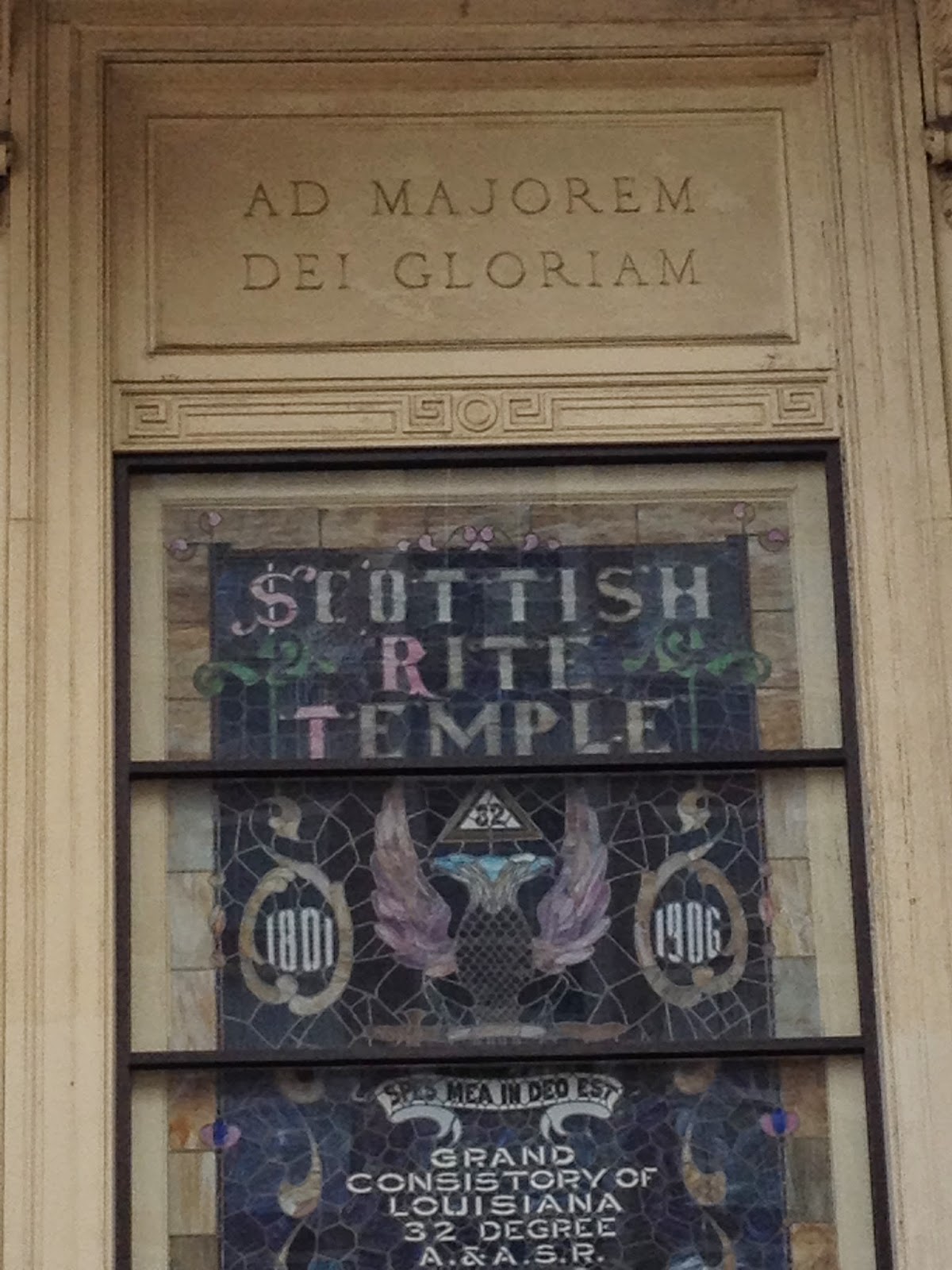 My guess is that Jesuit High School, now several miles farther from downtown, started here. But the right conspiracy buff could find much to work with.

It was my impression that the statue of Andrew Jackson in Jackson Square is similar to but also slightly inferior to the statue in Lafayette Square in Washington; however, Wikipedia says that they are castings from the same mold. It may be that I'm used to seeing the statue from its right side, and in New Orleans I approached it from the left.. The base of the New Orleans statue has "The Union, It Must, and Will be Preserved" on two sides, which an acquaintance attributed to the Federal occupiers during the Civil War. The statue in Washington says "Our Federal Union: It Must Be Preserved", both versions of a toast Jackson gave at the Jefferson Day dinner of 1830.

The Librettos of Daydreams

Certain novels astonish me by their popularity.They are set in times and places not so remote as to be unknown, yet the features don't match up. The local color and details belong to some other place, or belong  nowhere. Nor do plotting or sentiment compensate. Both tend to be predictable; the latter is meant to be sweet but cloys. Reasoned arguments do not affect their fans--try giving such a book a one-star review on Amazon, and await the replies.

It has occurred to me that I have been mistaken in taking these books as a finished product: they are the librettos of daydreams.

The libretto for an opera, read in silence, is dull, even if da Ponte has worked from Beaumarchais's play. The lyrics tend to be not much more than serviceable, the plots run to farce and melodrama. Could you sit through The Magic Flute or Rigoletto without the music? Yet when the contralto gets going, I don't care that she is a woman playing a boy, who will presently play a woman. When the countess and Susanna get going, I don't really care about anything else at all.

I believe that readers who keep (say) The Royal Nonesuch way up the NY Times bestseller list for all those weeks aren't really reading the book, they are hearing their own opera. It may be my opinion that the libretto owes more to Winfrey than to von Hoffsmanthal, and that the music is more likely Muzak than Mozart, but I am not the intended audience. For that intended audience, I am the bore who wishes to talk about Freemasonry or gender roles when they're trying to listen to The Magic Flute or Der Rosenkavalier.

Posted by George at 5:02 PM No comments:

It occurred to me this weekend that the first Father's Day acknowledgement I received was over thirty years ago, years before I was a father. The Washington RunHers sponsored a Father's Day five-kilometer race, with the requirement that every entrant be a father or a son. I suppose that I must have heard about this from a friend who belonged to the group. In any case, I found my way out to western Arlington County or thereabouts, and had an enjoyable run, with the encouragement of the wholly female staff. I remember my time, approximately, and I remember bumming a ride back to Rosslyn with a wholly male carpool. I believe I remember the name and face of one of the RunHers who worked the run, an acquaintance. But I thank them, at this distance, for an enjoyable afternoon.
Posted by George at 3:59 PM No comments:

Opposition and change are the foundation of Herakleitos's philosophy. His fragment 27 says, again in Guy Davenport's translation


When Homer says that he wished war might disappear from the lives of gods and men, he forgot that without opposition all things would cease to exist.

Well, Homer puts the wish into the mouth of Achilles, mourning in Book XVIII for Patroclos. In Book IX, when he and his were still sitting out the battle, Odysseus and Ajax found Achilles playing on a plundered lyre, and singing the glory of warriors. Till then, only Thetis, in Achilles's circle, showed much feeling for the shortness of life.


Homer should be thrown out of the games and whipped, and Archilochos with him.

I don't know what in Archilochos bothered Herakleitos. Archilochos, a mercenary, did know the chances and sufferings of war, and left, like Horace (Odes, II, 7), a poem about discarding his shield in flight from a losing battle.

Posted by George at 5:00 PM No comments:

The other evening in 7 Greeks: Translations by Guy Davenport, I noticed Fragment 25 of Herakleitos:


War is the father of us all and our king. War discloses who is godlike and who but a man, who is a slave and who is freeman.

Certainly that was the common Greek understanding. But then in Thucydides, Book 4, Chapter 40, concerning the capture of the Spartans at Sphakteria, one finds


Nothing which happened during the war caused greater amazement in Hellas; for it was universally imagined that the Lacedaemonians would never give up their arms, either under the pressure of famine or in any other extremity, but would fight to the last and die sword in hand.No one would believe that those who surrendered were men of the same quality with those who perished. There is a story of a reply made by a captive taken in the island to one of the Athenian allies who had sneeringly asked 'Where were their brave men-all killed?'; He answered that 'The spindle' (meaning the arrow) 'would be indeed a valuable weapon if it picked out the brave.' He meant to say that the destruction caused by the arrows and stones was indiscriminate.