A while back, I noticed this statue 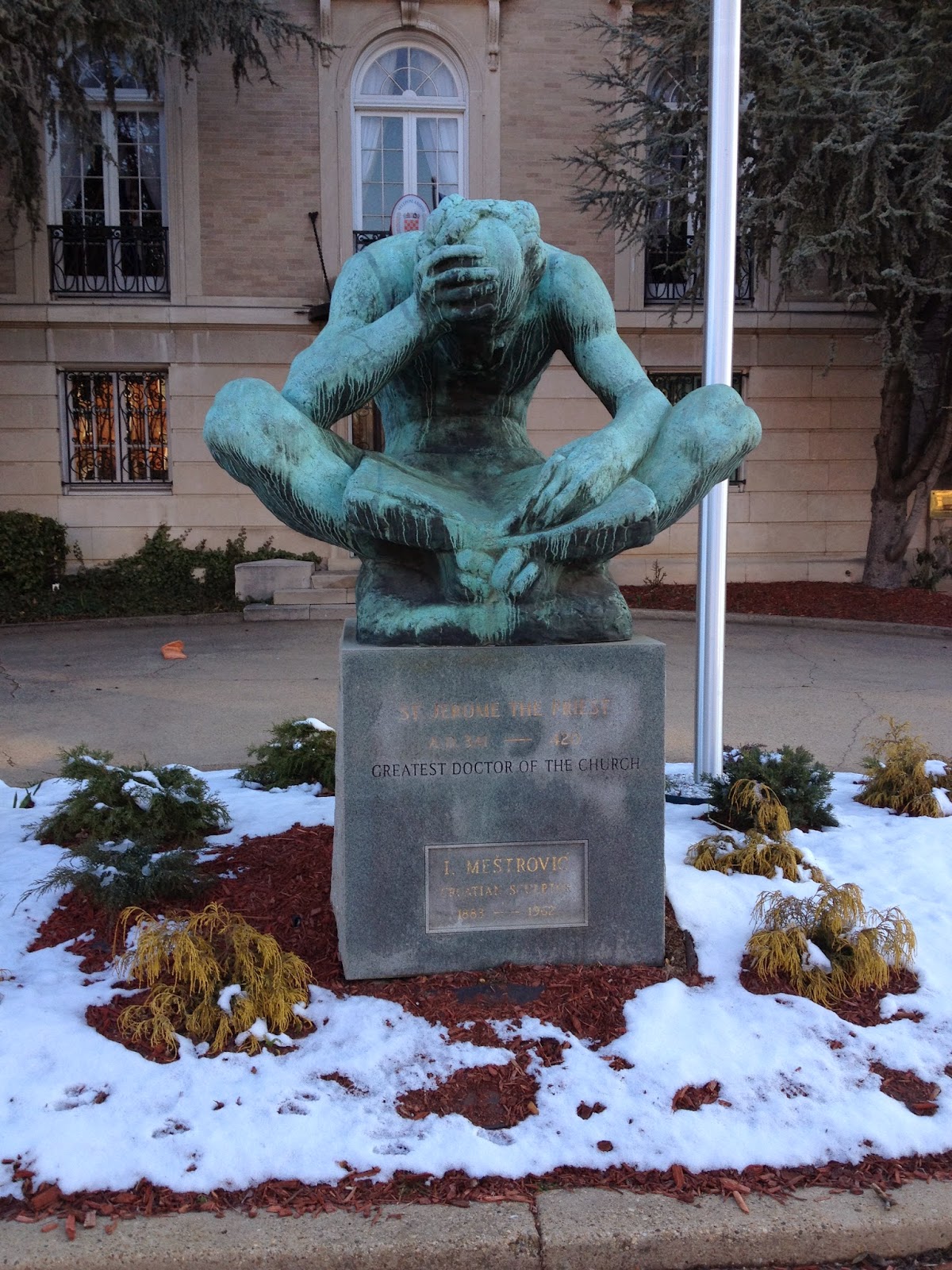 of St. Jerome outside the Croatian Embassy on Massachusetts Avenue NW. It identifies him as "St. Jerome the Priest" and "Greatest Doctor of the Church". But apparently it is not clear whether St. Jerome's birthplace was within the borders of modern Croatia or of modern Slovenia.

And last month on Columbia Road, NW, I noticed on a van a sticker I had never seen before, the small blue sticker in the lower right corner of the left window: 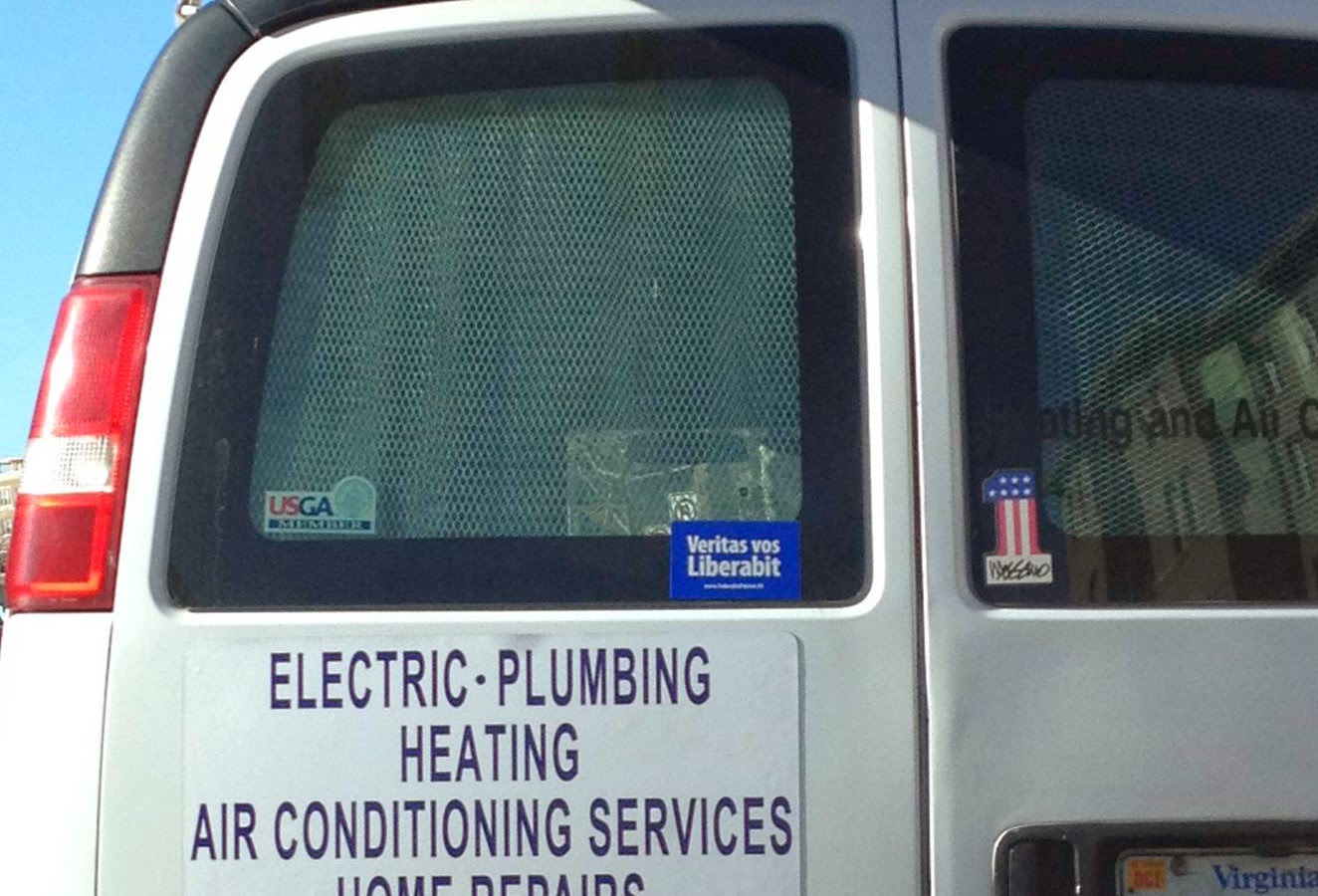 Today my run took me past St. John's College High School. Before I was in sight of the field, I could hear the sound of an aluminum bat striking a baseball. Then I saw boys out warming up in the field. My thoughts ran something like


The newspaper says that plants are three weeks behind. Perhaps so. I did see crocuses out on lawns along our street.
Posted by George at 2:07 PM No comments:

The Difficulties of the Easy Way

About four fifths of the way through Under the Net, Iris Murdoch's first novel, the narrator, Jake Donaghue, translator and idler, finds a job as orderly in a hospital:


It amazed me, in retrospect, when I considered how readily I had been engaged--no questions put, no references asked for. Perhaps I inspire confidence. I had never before in my life attempted to get a job. Getting a job was something which my friends occasionally tried to do, and which always seemed to be a matter for slow and difficult negotiation or even intrigue. Indeed it was the spectacle of their ill success which, together with my own temperament, had chiefly deterred me from any essays in that direction. It had never occurred to me it might be possible to get a job simply by going and asking for it, and in any normal state of mind I would never even have made the attempt.You will point out, and quite rightly, that the job into which I had stepped so easily was in a category not only unskilled but unpopular, where a desperate shortage of candidates might well secure the immediate engagement of anyone other than total paralytic; whereas what my friends perhaps  were finding it so difficult to become was higher civil servants, columnists on London dailies, officials of the British Council, or governors of the B.B.C. This is true. I was nevertheless impressed, at the point which our story has now reached, and not only by my having got the job, but also by the efficient way in which I turned out to be able to perform it.

I walked into similar jobs when younger--delivering chicken, stacking boxes, busing tables, etc. In the poorly compensated range of white collar skills, I have read proof and done copy editing, both which jobs used to be easy to come by. And at a higher level than that, I have known people to take positions with the sort of organizations that Washington has so many of,  jobs that are a bit of a reach for their experience. Commonly, they have done well.

The problem, though, with the low barrier to entry is that the qualified and uncredentialed are not the only ones stepping over. There are plenty of plausible and unqualified candidates who step over too, sometimes at high levels, and then one has to deal with them. This can be rough, particularly when the unqualified have made their way by assertive and unreflecting self confidence.

Long ago, a friend of mine took up the practice of law in his hometown. Over dinner, he hold me about a particular judge in the local courts, a man so lost that one could get away with tricks in his courtroom. He and a colleague managed to introduce hearsay evidence, for example, and the judge, unable to identify hearsay evidence when he heard it, overruled the opposing counsel's proper objection. The problem, my friend said, was that what goes around comes around: the day was sure to arrive when Judge So-and-So would make an egregious error that went against you.

It has seemed to me sometimes lately that there are more women than men running in Rock Creek Park. Today I counted as best I could on my route from Tilden St.  down to Georgetown. The count was 58 men to 57 women, not what I expected. However, a good dozen or twenty of those men were young men from some athletic team at St. Albans, getting into condition for the spring season. I don't know why the young women of National Cathedral School couldn't have turned out to support my theory.

The last time I tried a count along the same route was a month or so ago, when the weather was colder. Then the women did have a slight preponderance. But when I left the park at the Zoo (about a mile below Tilden), I had counted fewer than forty runners in all.
Posted by George at 2:23 PM No comments:

In 1996, Richard Gabriel published Patterns of Software, a collection of essays mostly about computer programming. As far as I can see, Oxford University Press has let it go out of print. Recently, though, I noticed that it is freely available in PDF format at Gabriel's site Dreamsongs It is well worth a look, particularly for those interested in programming, but also for those interested in his reflections about schooling and education. The book is free: you really should read at least the essay "A Personal Narrative: Journey to Stanford."

The memoirs appear in  Parts IV and V (of v) "The Life of the Critic" and "Into the Ground." Of the four chapters, I think that the first, "A Personal Narrative: Journey to Stanford" will be of most interest to those not involved with computers. Gabriel grew up in northern Massachusetts, on a farm outside Merrimac. This meant, among other things, that he attended what was said to be the worst high school in Massachusetts, perhaps the worst in the northeastern United States. Even so, he might have gone on to attend Harvard, but for an inadvertent conflict with a sensitive teacher. He ended up at Northeastern University, where he discovered programming. After graduation, he went on to a year at MIT, and then to the University of Illinois, and ultimately Stanford.

The point that he makes that strikes me most is


Being smart is largely learned  behavior. When I went to Northeastern—mediocre as it was then—I had a tough time adjusting to the way people talked and how smart they were. Keep in mind that every year only a handful of students in my high school went on to a real college and so there was no pressure at all to be smart.

(Yet he had the toughness to meet the challenge there, and at MIT, and UIUC; many of us would have folded.)

The chapters "A Personal Narrative: Stanford", "Into the Ground: Lisp", and "Into the Ground: C++" have a lot to say about graduate school and the tech industry. Whether they will engage anyone not involved with and interested in computing, I can't say.


The first three parts of the book are primarily about the programming world as it was then. The software world of 1996 was very different from what we see today. The scripting languages so much used now were hardly known.  PHP, the language in which Facebook is written, had been devised the year before. Gabriel writes of a world in which programmers not working in finance or scientific establishments tended to use C, Assembler, or maybe C++. Still, his essay "The End of History and the Last Programming Language" remains relevant. His argument that "Languages are accepted and evolve according to a social process, not a technical or technological one" seems to me correct. That "Successful languages must not require users have 'mathematical sophistication.'" is probably true, to the chagrin of the Haskell and OCaml folks. The requirement that successful languages have modest or minimal resource requirements has decreased in importance, since computers are so much more powerful.