Kickball season seems to have just started. At least, it was last week  that I first noticed a couple of the young wearing their team shirts.

My generation gave up kickball at about age 12, maybe 11 if you don't count PE. Playing kickball at 13 or older would have caused one to be seen as simple-minded or simply uncool. Of course, so would have many actions that the distinctly cool do now: buttoning the top button of shirt not worn with a tie; wearing a tee shirt under an athletic shirt; wearing dark socks with athletic gear; etc.

A co-worker of about 30 tells me that mostly this has to do with drinking, and in fact one of the shirts I saw today showed that the team was sponsored by a bar on Capitol Hill. I am sympathetic to physical activities that serve as an excuse for subsequent beers, not that I ever required much of an excuse. I suspect kickball is supposed to be ironic. if so, the irony is lost on me, which would be satisfactory to the ironists and to me.

In Herbert Simon's Models of My Life, he states his "Travel Theorem":


Anything that can be learned by a normal American adult on a trip to a foreign country (of less than one year's duration) can be learned more quickly, cheaply, and easily by visiting the San Diego Public Library. San Diego is not essential; you can substitute any other major city. (I conceived of the theorem when I was about to go to India, where I was supposed to acquire expertise in Indian management education and a good tan--in San Diego, I could have acquired both.) The theorem holds in spades if the traveler does not have a fluent knowledge of the language of the country visited.
...
So most American adults, long before the grasp their first passport, have had contact with a wide range of human cultures. If they have been at all observant (if not, they will be no more so abroad), they will have learned what a peasant is, and what are his feelings toward the possession of land; they will have heard the political views of a blue-collar worker; they will have glimpsed the life of a Midwestern born-again Christian; they will have observed the flittings of Beautiful People, and the diligent journeys of salesmen.
...
The theorem was discovered during a period when I was advising the Ford Foundation about its programs in management education. whevever the Foundation was considering a new program in a foreign land, it would sen out an an American expert to survey the scene in two weeks and return with recommendation. The expert need not have any background of knowledge about the country to be visited--only about, for example, American management education, if that was the topic. The procedure was so obviouisly ridiculous that the travel theorem came to me in an immediate Aha!

It is a pity that MIT Press has not found it worthwhile to keep the book in print...
Posted by George at 4:31 PM No comments:

Today is the 100th anniversary of Alan Turing's birth, and Google has a nifty doodle representing a Turing machine as its doodle today. The Register links to a Dutch project that made a Turing Machine with Lego Mindstorms parts.


The mutilation of young Hamza did not crush the Syrians; it enraged and catalyzed them.

The OED I have does not include catalyze (or catalyse) as a verb, unless in the supplements. For the noun catalysis it includes


2. The name given by Berzelius to the effect produced in facilitating a chemical reaction, by introducing a substance, which itself undergoes no permanent change. Also called contact action.

(Sense 1, given as obsolete, is a nod to the Greek: dissolution, destruction, ruin.)

I suppose that the reviewer might have reached for "galvanize", but have come up with "catalyze" as more, well, cataclysmic. To anyone who has ever taken even high school chemistry, it reads distractingly wrong. The byline describes the reviewer as a staff writer at The New Yorker, a publication that used to excerpt absurdities from small-town publications, and print them as filler under facetious headings.

I think it wrong, or at least a waste of time, to read to confirm my prejudices. Yet when chance throws something in my way, why not enjoy it? This afternoon I took from my shelf of copy of Kipling, Auden, and Company by Randall Jarrell, and opened it at random. The second flip of the page yielded


(That a poem beginning I think continually of those who were truly great should ever have been greeted with anything but helpless embarrassment makes me ashamed of the planet on which I dwell.)

I laughed, briefly but from the belly.

Posted by George at 9:45 AM No comments:

Tall ships are gathering in Baltimore to commemorate the 200th anniversary of the War of 1812. It is appropriate that ships should take part, for the war grew out of America's frustration with the restrictions placed and depredations practiced on its commerce by the British and French. It is also appropriate in that for a long time the US had no successes to point to but naval ones.

Baltimore saw action, but late in the war. Having successfully raided Washington, the British attacked Baltimore. Their soldiers encountered field fortifications that appeared uneconomical to storm; in any case they had lost their general in the confused skirmishing. The celebrated shelling of Fort McHenry, on the other hand, caused no deaths or injuries on either side. Still, it was showy enough to inspire Francis Scott Key to write "The Star Spangled Banner", a fine anthem that few can sing.

Yet in June of 1812 there was excitement in Baltimore. A city mob destroyed the plant of a Federalist paper that had dared criticize the declaration of was. The next week's edition of the paper was printed in Washington, but with the address of a house in Baltimore. The mob attacked this house, where the occupants were waiting, armed, and were fired on. The occupants were taken to jail, but the mob broke into the jail and beat them. One man, a veteran of the Revolution, died of his injuries. Henry (Light Horse Harry) Lee, sometime governor of Virginia and father of Robert E. Lee, survived, but never really recovered his health.

There were riots again in Baltimore at the beginning of the Civil War, when the locals exchanged fire with Massachusetts infantry marching from one rail station to another. Maryland was a slave state, much in sympathy with secession, and did not care to see Yankees marching through.

The Maryland state anthem, "Maryland, My Maryland" recalls this incident. Now and again somebody will notice that "the despot's heel is on thy shore" speaks poorly of Abraham Lincoln, and will raise a question in the legislature about changing the song, but nothing has been done yet.
Posted by George at 4:21 PM No comments:

It seems to me that we in America suffer too often from the belief that to systematize is necessarily to rationalize. I have seen this up close in the worlds of children's sports and in education. During the 50 years or so over which my memory of the matters extends, they have been relentlessly systematized, but it would be flattery or deceit to say that they have been rationalized.

Sunday's New York Times reviews The Most Expensive Game in Town, a book by Mark Hyman on youth sports. It documents the astonishing amounts of time parents and children spend on these teams, and the also astonishing amounts of money involved. Most of the children, of course, will reach their limits by the end of high school; a few will go on to play sports at the college level or in the minor leagues; and a tiny fraction will be good enough to make a living playing a sport for a few years. And of course this was the way things worked when even Little League was hardly known, and most kids didn't play on teams outside of school.

US News and World Report will be happy to tell you what are the best high schools in the country, based on a "challenge index", a ratio of AP exams taken to the size of the graduating class. It is very systematic, breaking ties out to I think the fourth decimal place. The same publication will tell you whether Notre Dame is this year better than Brown, or Carnegie Mellon than Case Western Reserve, and will back it up with statistics. The challenge index can be gamed, by pushing more students into the AP courses; some thoughtful and articulate teachers have argued that this does not help the students or the school. The statistics that go into the college rankings can be gamed--you can become more selective by encouraging more students to apply.

And now the states are dealing with the consequences of "No Child Left Behind". The scores aren't what they should be, despite the schools closed and the teachers counseled or pushed out. Systematically,  perhaps rationally, states are redefining the threshold for proficiency, lowering the score that must be achieved.

Posted by George at 7:17 PM No comments:

Noticed on my morning walk, the front window of Idle Time Books in Adams-Morgan: 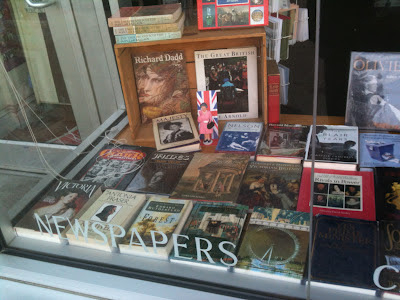 The little plastic Queen figurine is I understand solar-powered. In any case, it was waving benignly to the passersby on 18th St. NW. The books all touched on Great Britain in one way or another, though one on Ducal Brittany suggested either shortage of stock or of attention.

Posted by George at 5:35 PM No comments: