Today I wished to calculate a little nearer a value I reckoned at around 1500. I brought up the Start menu on my PC, opened Windows Accessory, and found not Calculator but "Math Input Panel". I had seen this under an earlier version of Windows, had made nothing of it, and hoped that it had been discarded by the time Windows 10 shipped. It had not.

I clicked in the window, started to type, and saw nothing in the panel. The keystrokes were going to the window previously visited, which was not what I wanted, of course. I therefore tried to draw the first term of the calculation with the mouse. That turned out worse than I'd have imagined.

I did once manage to trace a "4" that the panel accepted as a 4. Most times it read my 4 as the Greek letter phi. Out of curiosity, I kept on going, to draw 47000 as best I could. The panel interpreted it as phi to the delta E something-something. (E backwards, the symbol logicians use for "there exists").

The program strikes me as a tour de force, a case of programmers seeing what ingenious notions they can implement without considering what the users will make of it. I find it odder in that I never supposed programmers as a class to have good fine motor skills in general or good handwriting in particular. I generalize from my own experience, but am I wrong?

As it happened, I was also working on a Linux system, so I used its calculator. That accepted keyboard input, did not interpret "4" as phi, and gave me the answer I was looking for. One never really expects Linux to have friendlier tools than Windows, but in this case it did.
Posted by George at 6:12 PM No comments:

To Mars, and Also to Armonk

On Wednesday afternoon, I passed a man wearing a tee shirt that read "Open Source Took Us to Mars", a reference to the use of various open source software in processing the data from the Curiosity rover. Of course I then had to look back to see what the back of  his shirt said, which was "Red Hat". Red Hat is one of the oldest and most successful providers of Linux distributions, so this wasn't a surprise.

But IBM recently purchased Red Hat. That also is not astonishing, for IBM has supported the use of Linux virtual machines on top of its systems for a long time. Yet when one thinks of open source software, one thinks of young coders, casually groomed, and in casual clothing. That was not at all the IBM style. It is said that many years ago the way one established one's genius at IBM was to grow a beard: if one was not fired, the world saw that one was too intelligent to fire. And a salesman once employed by IBM told of the shock a co-worker produced by wearing a dress shirt that was blue rather than white.
Posted by George at 7:15 AM No comments:

Noticed in Musil's The Man Without Qualities, Chapter 16, "Cultural Revolution":


For the rest, there is no part of the past we know so little about, for all sorts of reasons, as the three to five decades between our own twentieth year and that of our fathers.

One's own first twenty years offer an intimate view of the times, though neither a broad nor an impartial one. Why our view of the preceding decade or so should be so obscure, I don't know. Do we take our parents' words for how things were? And one can only suppose that Musil has in mind a deep understanding, not a knowledge of facts. During the last decades of the 19th Century the press relentlessly collected and published facts, and the rate of this has only increased since.

(Also, "three to five decades"? The governing classes of the Dual Monarchy seem to have married late.)

In his John Henry Newman, Ian Ker quotes his subject, who "Amused as well as embarrassed by a lady who called him a saint... remarked"


I may have a high view of many things, but it is the consequence of education and of a peculiar cast of intellect--but this is very different  from being what I admire. I have no tendency to be a saint--it is a sad thing to say. Saints are not literary men, they do not love the classics, they do not write Tales. I may be well enough in my own way, but it is not the 'high line.' People ought to feel this, most people do. But those who are at a distance have fee-fa-fum notions about one. It is enough for me to black the saints' shoes--if St. Philip Neri uses blacking, in heaven.

One might raise various objections here: St. Jerome was troubled in conscience about his love of the classics; St. Thomas More is remembered for his tale Utopia; etc. But now one can use an argument Newman steadily returned to: Securus judicat orbis terrarum.
Posted by George at 4:07 PM No comments:

Earlier in the year, my brother remarked that the toilet in the basement would run. It appeared to me, when I looked at it, as if the flapper where not centered on the ears of the flush valve, and so did not close properly. I centered the flapper, and it appeared to be OK. It was not.

I had another look this week. My first thought was to reorient the flush valve, so that the flapper should settle cleanly on the drain. This required something that would turn a nut that was more than 3" across. I bought 4.5" channel lock pliers, which worked nicely. Reorienting the flush valve did not. I therefore bought a replacement valve, for something less than the cost of the pliers. This morning I installed the replacement, and it works properly.

The part I replaced surprises me. I also don't see how it could have made it past quality control at the factory. I don't see how a competent installer could have supposed it would work. The flapper is simply not big enough to cover the drain: 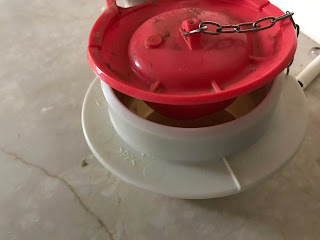 A properly fitting flapper would be closed. Nor could the flapper simply be replaced. As the next picture shows, the arms do not simply hook over the "ears", they enclose them: 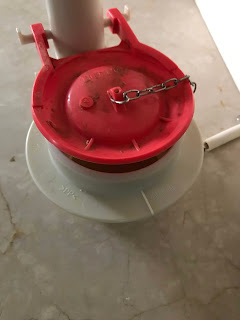 I am glad to be rid of the worse product.

Posted by George at 4:29 PM No comments:

During the summer when I come home from work, I change into tee shirt and shorts, and walk around the house barefoot. Most Septembers, I try to maintain this routine. Some years I find myself very cool about the equinox, tempted to go to bed early to warm up. On October 1 of such years, I put on jeans and a flannel shirt with satisfaction

This year there has been no such challenge. The high on October 2 was above the 90 Fahrenheit, and it isn't much cooler today. On Wednesday, I noticed a hibiscus still in bloom on 16th Street NW about Riggs Place: 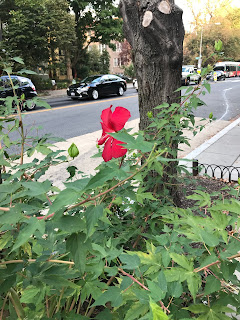 There was only one flower, down from about ten two weeks ago: 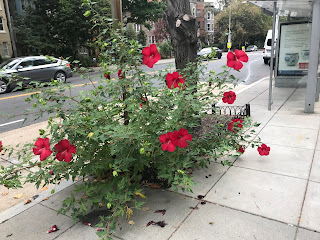 Still, I am not used to hibiscuses in a Washington fall.