How Pleasing It Would Be

The epilogue to George Kennan's The Decision to Intervene,  Volume II of Soviet-American Relations 1917-1920, ends


The reason for this failure of American statesmanship lay, as the reader will have observed, in such things as the deficiencies of the American political system from the standpoint of the conduct of foreign relations; the grievous distortion of vision brought to the democratic society by any self-abandonment--as in World War I--to the hysteria of militancy; the congenital shallowness, philosophical and intellectual, of the approach to world problems that bubbled up from the fermentations of official Washington; and the pervasive dilettantism in the execution of American policy. How pleasing it would be if one were able to record, in concluding this volume, that these deficiencies had been left behind, along with all the individual undertakings and adventures of 1918--to be recaptured, like these, only by the labor of the historian; to take on, like these, that deceptive quaintness which the passage of time bestows on all human situations, however tragic; to be contemplated, now, from a safe distance, as the components of dead situation only partially relevant to our own.

Yet after reading the volume, it seems to me that though the failures of American policy are clear, no ally's policy was sounder. The concerns of the US War Department were borne out by the results of the intervention--an embitterment of Russian opinion, with no effect on Soviet power, or, while the war lasted, the efforts of the Central Powers. The British and French authorities that nudged the US into the undertaking had much more professional management on the civilian side, but their understanding of the realities of Russia was no better and perhaps worse.

(Princeton University Press has brought the both volumes of the pair, Russia Leaves the War being the first, back into print.)
Posted by George at 6:09 PM No comments:

The narrator of Alan Tate's novel The Fathers makes a passing reference to Henry Adams, then  in his early twenties, as "even then a great snob". I have questioned the qualifications of Virginians as judges of New England humility. On the other hand, Adams was aware of the impression he made:


For twenty five years, more or less, I have been trying to persuade people that I don't come from Boston and am a heartless trifler. I might as well try to prove that I am an ornithorhyncus of the siluroid civilization. If I stood on Fifth Avenue in front of the Brunswick Hotel and in a state of obvious inebriety hugged and kissed every pretty woman that passed, they would only say that I was a cold Beacon Street aristocrat, and read the New York Nation regularly.

At American swimming pools, the last ten minutes of an hour are commonly given to "Adult Swim". The lifeguards blow their whistles, person under eighteen years of age scramble out, and the adults can swim, laps or otherwise, unobstructed by the young at play. I don't remember resenting this much as a child, or making great use of it, say for lap swimming, as an adult. Still, I have been accustomed to expect the whistles at fifty minutes after the hour.

It occurs to me that a similar custom would serve bars and and restaurants well: during the last ten minute of an hour, the pounding music could be turned off, and adult conversation made easier.  Many of the customers may love to hear the American popular music of fifty years ago played at arena volume, or it may never have occurred to them that they might dine or drink otherwise. On the other hand, some number do wish to carry on a conversation, which can be difficult when music of any sort plays at such volume.
Posted by George at 1:28 AM 2 comments:

Where we have been staying there are a few books, among them the six volumes of Churchill's history The Second World War. I have dipped into it here and there, and found in the first volume


I had arranged at the beginning of 1931 to undertake a considerable lecture tour in the United States, and travelled to New York. Here I suffered a serious accident, which nearly cost me my life. On December 13, when on my way to visit Mr. Bernard Baruch, I got out of my car on the wrong side, and walked across Fifth Avenue without bearing in mind the opposite rule of the road which prevails in America, or the red lights, then unused in Britain. There was a shattering collision. For two months I was a wreck.

After several days trying to remember which way to look, I can see how this might have happened. I don't remember this incident from Roy Jenkins's biography of Churchill.

Yesterday afternoon, we had wine and snacks in a hotel bar in Holborn. This had many bookshelves When first seated I noticed the cover of a volume ten yards away, and walked over to check it. It was, as I had supposed, a volume of Churchill's history, but in a different binding. I wonder where I knew this binding from--a relative's house or a school library?
Posted by George at 11:40 PM 4 comments:

Noticed yesterday in How to Do Things With Words by J.L. Austin, the last paragraph of Lecture III:


And we must at all costs avoid over-simplification, which one might be tempted to call the occupational disease of philosophers if it were not their occupation.

The Boltonia in front of the house has mostly gone for show in vases. In back it remains, right up against the birdbath: 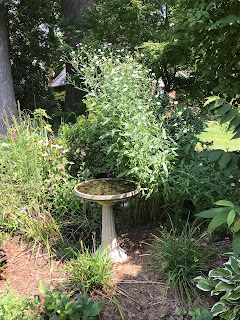 I have not watched to see how it affects the birds. But I think it must entirely obstruct the view from under our neighbor's porch, an observation spot favored by a number of neighborhood cats.

Before I had read through anything of his, I saw quoted one of Gerald Weinberg's dicta:


If architects built buildings the way programmers build programs, the first woodpecker to come along would destroy civilization.

I don't think that I ever read the piece from which that was taken, but eventually I read The Psychology of Computer Programming, The Secrets of Consulting, Becoming a Technical Leader, and Perfect Software. Weinberg combined remarkable ability in programming with an equally unusual ability to listen to and hear what people were saying. My copies of The Secrets of Consulting and Becoming a Technical Leader I lent out about ten years ago and never got back, but I think of some of the precepts frequently. I believe that even persons with no interest in computing could read them with profit.

Weinberg died August 7. This sample of his writing includes a few precepts from The Secrets of Consulting.

(By the way, when I mentioned the programmers and architects analogy to an architect of my acquaintance, she said, "Oh, but that is the way architects build buildings." I hope she exaggerated.)

For the second time in a bit over a year, I have read G.E.M. Anscombe's Intention. Among the blurbs on the back cover is one from J. David Velleman of the University of Michigan:

I can't confidently say that I beat the average on "understood", but I think that I have read it more than I have quoted it, for I'm not sure I've quoted it: certainly I have spent more time reading it than quoting it.

The book is slim, 94 pages, but slow going, at least for me. When I first saw it, it was next to a much thicker collection of essays about it. Perhaps they'd have enlightened me. On the other hand, I suspect I might do better by going back over Wittgenstein's Philosophical Investigations. Maybe I will.
Posted by George at 5:56 PM No comments: