A few days ago, I noticed many immature acorns in the alley, and then on the back lawn and the sidewalks. These acorns are mostly cap, and not much of that: the cap will be a quarter-inch in diameter, and the tip of the nut hardly protrudes. Here are a couple, with a penny to show their size: 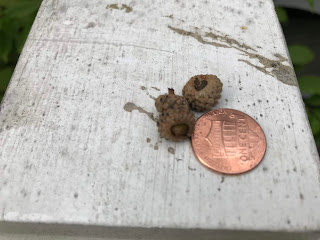 I don't remember seeing this in other years, and we wonder whether the heavy rains of the previous ten days brought these acorns down. We wonder also if it will be a lean year for acorns after several fat ones.
Posted by George at 6:40 PM No comments:

Joel Poinsett, diplomat and amateur botanist, is chiefly known for introducing the Mexican plant, there called the Flor de Noch Buena (Christmas Eve flower) to North America and beyond, where it is called the poinsettia. Other than that, I had never heard much of Poinsett's activities, except that he held responsible diplomatic posts in Latin America.

In Journey to America, de Tocqueville's notebooks from America, edited by J.P. Mayer, the transcript of a conversation with Poinsett take up about nine pages. While looking through this, I was struck by the following passage:


The most dangerous men are the emancipated blacks. Their presence makes the slaves restless and long for freedom. I think it is indispensable to take away from the masters the right to free their slaves, and especially the right to free them by will. Washington gave a very bad example by freeing his slaves at his death.

Most people have thought that Washington gave a very good example. It is true that during the first half of the 19th Century emancipation became more difficult in a number of states, and Maryland (I believe) made it impossible to free slaves by a will.

Yet Poinsett goes on


It is an extraordinary thing how far public opinion is becoming enlightened about slavery. The idea that it is a great evil and that one could do without it is gaining ground more and more. I hope that the natural course of things will rid us of slaves. I know people still who have seen slavery in New England. In our time we have seen it abolished in the state of New York, then in Pennsylvania; it only holds on a precarious existence in Maryland; there is already talk against it in Virginia.

It is not clear from the transcript how Poinsett imagined the future of the formerly enslaved.

Posted by George at 2:18 PM No comments:

Only His Are Much Longer

Noticed the other week in The Man from New York: John Quinn and His Friends:


At the end of the year [1916] the two were corresponding half-seriously about a play on which Mr. [John Butler] Yeats had been working in a desultory way. Sending Quinn some lines of verse from his fragmentary text, he commented: "Like Homer, I have written two poems, only his are much longer."

The senior Yeats's formula is wonderful, and easily adapted:


Like Michaelangelo, I have painted ceilings, only he put pictures on his.

Like Chekhov, I have written short works of fiction, only mine were to explain absences from school and work.

The book is most interesting to dip into for anyone with an interest in the literature and art of the early 20th Century. Quinn was purchaser, patron, benefactor, or lawyer to Synge, Augustus John, Jacob Epstein, Ezra Pound, and James Joyce, among many others. He was active in Democratic politics, an admirer of  Grover Cleveland but not at all of Woodrow Wilson. On solicitation from John Sloan he contributed to the socialist newspaper The Masses, though as a lawyer he represented such clients as Standard Oil. Yet for all its interest, the book is forbiddingly thick, and I'm not sure what short of a two weeks quarantine will settle me down to read it through.
Posted by George at 5:29 PM No comments:

And I Read It There First

In "Classics by the Pound", an essay on the then new Library of America, Hugh Kenner wrote


And one difference between Harriet Beecher Stowe (1811-96) and Ross Macdonald (1915-) is that Macdonald, in devising his fables of modern identity, wrote them as things called "detective stories," handled at Harvard with tongs, whereas Mrs. Stowe's famous eleven Kleenex tract, sanctified by a testimonial of Lincoln's, soars aloft into the Disnified sunsets of literature. So the matter stands in 1982. But in a hundred years, if this series is still around, it either will have atrophied into total irrelevance or else will have managed to embalm three novels by Ross Macdonald. Just watch. And you read it here first.

I did read it there first, in Harper's when it appeared in 1982, and since when collected in Mazes.

Macdonald's work did not have to wait a century. Ross Macdonald: Four Later Novels is the third volume of Macdonald's novels that the Library of America has published, appearing in 2017; the first volume appeared in 2015. Nor is he the only one whose detective novels are available: Elmore Leonard, Raymond Chandler, and Dashiell Hammett are linked from the Macdonald pages on the Library's website. And I do  not suppose that Harvard handled detective fiction with tongs these many years.

I should have taken Kenner's and Welty's words on Macdonald when I read them all those years ago. Welty's were in a review (collected in The Eye of the Story) of The Underground Man, one of the four later novels. I found the volume yesterday at Second Story Books, and have read through it with great interest. It would take another reading or two to get all of the genealogies of the novels straight: perhaps the Library of the America should include in an appendix family trees such as one finds in histories and mythologies.

According to the notes in the back of the volume, Kenner and Kenneth Millar, who wrote under the name Ross Macdonald, became friends in 1951, when Kenner was teaching at the University of California at Santa Barbara. Welty became a friend of Millar's after her review of The Underground Man.

Posted by George at 1:09 PM No comments:

The stretch of Beach Drive between Broad Branch and Joyce Roads NW opened on Tuesday, after a bit less than eleven months. The work now commences from Joyce Road to the Maryland line.

This morning I went for a run, and found that the opening of Ross Drive and Ridge Road did not mean that I would have to dodge cars while running from Joyce to Broad Branch. Probably many drivers have not discovered yet that it is opened; with Beach closed above Joyce, there is no route along these roads that is quicker than some other way; and I suppose that at 6:30 in the morning there seldom were automobiles there. Still the barriers were comforting; I expect that the weekend will bring auto traffic to the picnic groves along Ridge and Ross at least.

The pavement along the remaining portion of Beach Drive was pretty rough in many spots. On Saturday, I stepped into a foot-sized pothole that could have wrenched a knee or pitched me onto my face, had my stride been a bit different. On Sunday, knowing that it would be my last chance to run the stretch for about a year, I went back, and avoided that and the many other potholes.
Posted by George at 4:53 PM No comments: