The New York Times seems to have decided that "mentee" is a word, for today's paper applies the term to Paula Broadwell (whose sometime mentor was General David Petraeus), and the other week the Times applied it to one of the unfortunate women who imagined that Bill Cosby was her mentor. I dislike the expression, as implying that there is verb stem out there something like "ment." Yet  "mentir" and "mentior" don't seem to be what anyone has in mind.

Skeat,, however,  after giving the Homeric character Mentor as the source, relates the word to "monitor", derived from "monere", to warn. Well, he was a scholar, and I am not. Yet the nearest I can find in Liddell and Scott is μηνυτήρ, "informer, guide", related to the verb μηνύω, "disclose what is secret, reveal". Most of the cognate words seem to have to do not with guiding someone, but with giving incriminating information to the authorities.
Posted by George at 12:27 PM No comments:

Friday's Washington Post carries an account of the National Spelling Bee. When I last participated in a spelling bee, I was a tenth of my present age, and the words were in English. The words mentioned in the Post's story included

I think it is all to the good that American students study the vocabularies of foreign languages. I worry, though, that they may do so in the belief that they are studying the vocabulary of English. I know, of course, how well English naturalizes newcomers, and will happily snack on a knish or
drink a bock with any gourmand out there,. Yet apart from a college friend who had read Max Weber, I don't think that I have ever heard "gesellschaft" uttered in English conversation.

The amusement of a spelling bee seems to me best suited to the English language among those I know anything of--Spanish orthography has many fewer pitfalls for the speller, I understand. It may be, or may once have been peculiarly American. The 1871 novel The Hoosier Schoolmaster, set in the  first half of the 19th Century in rural Indiana, includes a spelling bee. There the winning word was "theodolite". Judging from the description of the rough people of the area, whose boys "driv off the last two [schoolmasters], and licked the one afore them like blazes", I suspect that the attempt to introduce "gesellschaft" or any word not in the then current Webster's Dictionary would have led to a riot.
Posted by George at 3:32 PM No comments:

Seen at the cathedral around the corner last week: 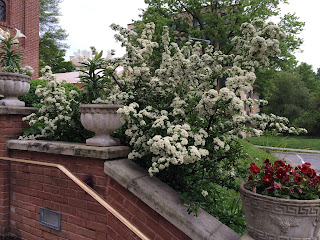 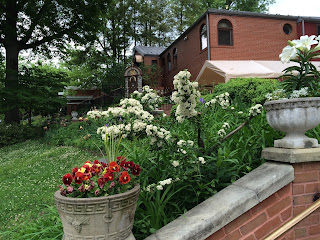 By the look of the flowers, 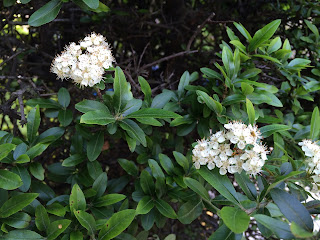 I take these to be hawthorns, but I can't make out from the Audubon field guide what kind of hawthorn. The flowers  suggest the downy hawthorn, but the leaves seem to have too many veins. There is a considerably larger shrub of the same kind, perhaps eight feet tall, across Shepherd Street NW from the church property.
Posted by George at 5:21 PM No comments:

Or Wherever, Or Whatever

Such as expressions as "or whatever" and "or wherever" have seemed to me teen-speak, something to nagged out of one's own offspring, and suffered politely among the children of others. I was surprised to encounter them in Henry James, but there they were in A Small Boy & Others:


I wonder whether James would have used these expression in the days when he wrote rather than dictated. The work does seem to me to show the marks of dictation. Every two or three pages there is something that I can't parse as a sentence, however I look at it. I have no reason to suppose the text is worse than it could be--if one can't trust Princeton University Press as publisher and Frederick W. Dupee as editor, whom can one trust? Yet I'm fairly sure that the word "ideal" as applied to a tutor of Boulogne days should be "ordeal" (Chapter XXIX).

I was also interested to encounter in Chapter V the expression "I seem to feel". In a letter of April 1949 to Nancy Mitford, Evelyn Waugh mocked Eddie Sackville-West for using just that phrase, "Surely the height of diffidence." I suppose, though, that Sackville-West was speaking of some more or less immediate perception; James wrote of memories of a time sixty years gone.

I am considering whether to take a break before continuing on with Notes of a Son and Brother.. Perhaps some German philosophy,  for shorter and less involved sentences?

This morning I passed the corner of 17th St. and Rhode Island Avenue NW, and was again surprised to see the YMCA closed, though it has been closed since the end of last year. The YMCA sold the property to a developer, which so far has done nothing with it.

When I moved to Washington at the end of the 1970s, this YMCA was in the news. It had just opened, and the membership fees were thought to be unusually expensive. The newspapers considered the question of who could afford it. Certainly I couldn't have, for I had very little money then. But a friend, an engineer who earned a good salary, found it more economical to sign up with the YWCA on 9th St. NW for his swimming. They had a men's locker room, and their rates were lower.

And now the YMCA hasn't been able to afford its old location. There has been an enormous increase in the number of gyms, presumably with prices better than the YMCA's, or perhaps with better or more focused programs. Shops have gradually vanished in downtown Washington, to be replaced largely by restaurants, banks, and gyms. The young professionals who would have been lifting weights or swimming at the YMCA are now doing cross-training or pilates at some smaller establishment, I guess.

I never stepped inside the building. I have always preferred running, for which Washington offers many excellent routes, to other forms of exercise. I will miss the children there for day camp in the summer. It was always good to pass by on a summer morning, and see young women and men of twenty or so signing in children of eight or ten who could hardly stand still for the excitement of being a child on a warm morning.

Some weeks ago, a relative sent me a copy of The Jerusalem Post, picked up on her way back from East Africa fifty years ago. Several characteristics stood out: there were many brief stories; all stories not local were from wire services; and the name Israel did not appear outside quotation marks.

The number of stories came first to the eye. I count fifty stories in a four-page broadsheet newspaper. One could quibble about the average density of the stories, for many are of this or that government viewing some development with concern. One in fact says that the People's Republic of China views with concern the USSR's viewing with insufficient concern certain actions of the USA. Still, truces are enforced, ceasefires take effect, the US sends its troops into the Dominican Republic and pulls its civilian nationals out, France leaves NATO, an earthquake strikes El Salvador.

I have had a look at The Washington Post's Metro section the last couple of days. Each day it ran to eight pages. Deducting obituaries and paid death notices, the weather, and local interest or opinion columns, there remained three and a half or four pages for news articles each day. In Tuesday's paper, I counted thirteen articles, in today's seventeen. Some of the longer articles justified their length, others could be have been reduced a good deal with little loss of information. The A Section of today's New York Times mostly has two or three pieces on an inside page.

I suppose that in an age of electronically provided news, this is what newspapers must do. No special edition of a print newspaper could compete with radio to break news, let alone the internet. One chooses the newspaper for longer pieces, and perhaps more insight. In the case of an article about the District of Columbia paying snow-removal bills with credit cards, I think the Post delivered that. Plenty of other pieces in both Post and Times give one paragraphs to amuse or pass the time, but don't especially inform.