The Language of Clarity, and A Neighbor


For objects the most clear in themselves, Kant often takes a thoroughly obscure metaphysics for guide, and it is only in the shadows of thought that he carries a glowing  torch: he recalls the Israelites, who had for guide a pillar of fire by night and a pillar of smoke by day.


But systems that aim at a complete explanation of the universe can scarcely be analyzed by any speech: words are not suited to these kinds of ideas, and so it occurs that in making them do this work one spreads over everything the darkness that preceded creation, not the light that followed it.

(Part 2, Chapter VII, "The Most Famous German Philosophers Before and After Kant")
Posted by George at 5:03 PM 2 comments:

The Past As It Would Have Been

As part of my clearance reading, I have just read The Swerve, by Stephen Greenblatt. The book does hold the interest, though I consider that Greenblatt might have done better in further untangling the threads that make it up, which I take to be
What struck me first, though, was the frequent use of "would" and "might". Within a couple of paragraphs of Chapter Two, "The Moment of Discovery",  one reads


.,. Poggio would have dismounted and walked up the tree-lined avenue toward the abbey's single, heavy gate.... The granaries at this point in the winter would still have been reasonably full, and there would have would have been ample straw and oats for the horses and donkeys in the stable. Looking around, Poggio would have taken in the chicken coops, the covered yard for sheep, the cowshed with its smell, and the large pigsties. He might have felt a pang for the olives and the wine of Tuscany, but he knew that he would not go hungry....
In 1417, if Fulda was indeed Poggio's destination, that ruler was Johann von Merlau. After greeting him humbly, explaining something about himself, and presenting a letter of recommendation from a well-known cardinal, Poggio would almost certainly have begun by expressing his interest in glimpsing the precious relics of St. Boniface and saying a prayer in their holy presence.

I think I understand the excitement that a scholar would find--as Petrarch, Poggio, and Erasmus did--in searching out forgotten works of antiquity, and I can understand an author wishing to convey that excitement to readers who have not considered it. But above a certain density of "would have"s and "might have"s, one starts to resist.

Posted by George at 1:33 PM No comments:

Egon Friedell's Kulturgeschichte der Neuzeit ends with about thirty pages devoted to the few years between the end of WW I and the appearance of the book. These give the impression of bewilderment, for Einstein appears next to a metallurgical crank with a glacial theory of the development of galaxies; astrology gets a mention--the Age of Aquarius--and Freud is mentioned with considerable respect, Freudians or simply psychoanalysts with contempt. It strikes me as understandable that a man who had come to maturity before the war would find the world after it baffling.

I suppose that the measure of a cultural history comes down to three matters. There is plausibility: do the points on which one can judge make one confident in the author's account of the rest? Is there the sense of being in touch with a lively mind? And does one come away with a longer reading list to follow up? On all three, Friedell measures up. I don't know that I quite believe in Bismarck as he did, or that I know what to make of his account of Wagner. Here and there he reminds me of the exile in Pictures From an Institution who said that his ambition was to be unjust to Austria. But in the balance these quibbles, even if I were wholly correct in them, seem to me to count for little.

Will I read it again? No, probably not all the way through, for 1300 pages make a long way. Will I pull it off the shelves now and then to refresh my memory of his judgments on this or that figure--Bismarck, Goethe, Flaubert, Luther--or simply to to enjoy the salt with which he expresses them? Almost certainly.

Posted by George at 3:49 PM No comments:

A Tree Sinks Down

The other Sunday, I noticed that a tree along 16th St. NW was leaning drastically: 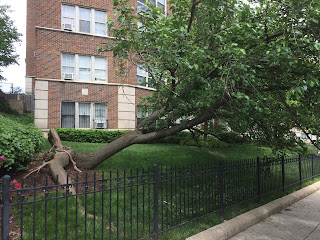 By this Monday, someone had done a little trimming, though the caution sign seemed an odd touch: 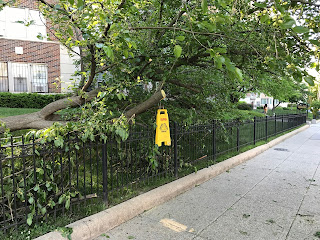 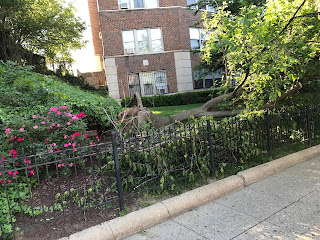 I was surprised that it took so long for the property management to get the job done. It is true that the limbs hung over a busy sidewalk, and at times a busy street, so that bringing in a standard tree crew might not have been practical.

Posted by George at 4:21 PM No comments:

Too Cultured for His Own Good

About 25 years ago, the University of Utah Press brought out Reading and Writing, the transcripts of a couple of lectures Robertson Davies delivered as one (or two) in the series of  Tanner lectures on human values. A discussion about "guilty pleasures" over at Informal Inquiries brought a passage to mind:


How dull he is being, you may think, as I draw near to my conclusion. How like a Professor. He is simply parroting Matthew Arnold, with his tedious adjuration that "Culture is the acquainting ourselves with the best that has been known and said in the world, and thus with the history of the human spirit." But I assure you that I mean no such thing, and I have always had my reservations about Matthew Arnold, who was too cultured for his own good; he seems never to have listened to the voices which must, surely, have spoken to him in dreams or in moments when he was off his guard--voices that spoke of the human longing for what is ordinary, what is commonplace, vulgar, possibly obscene or smutty. Our grandparents used to say that we must eat a peck of dirt before we die, and they were right. And you must read a lot of rubbish before you die, as well, because an exclusive diet of masterpieces will give you spiritual dyspepsia. How can you know that a mountain peak is glorious if you have never scrambled through a dirty valley? How doe you know that your gourmet meal is perfect in its kind if you have never eaten a roadside hot dog? If you want to know what a masterpiece The Pilgrim's Progress is, read Bonfire of the Vanities, and if you have any taste--which of course may not be the case--you will quickly find out. So I advise you, as well as reading the great books that I have been talking about, read some current books and some periodicals. The will help you take the measure of the age in which you live.

I regret to say that the press seems to have put the volume out of print: the earliest volume of the Tanner lectures offered is 26, and Davies was printed as volume 13.
Posted by George at 4:23 PM 1 comment:

Those Who Did Not Attend

In The Cultural History of Modernity, Egon Friedell mentions briefly the reform of the Gymnasium curriculum in late nineteenth-century Germany. He is without illusions concerning its shortcomings, including a couple of requirements then removed (to the distress of the traditionalists), the essay, which


never was anything but a comedy of free composition, for it consisted of the empty mechanical permutation of Ciceronian phrases

and Latin as the language of instruction:


although this was a perfect farce, for what could be sillier than a dressed-up, bespectacled petit bourgeois addressing his fellow men in the manner of the Roman Quirites?

In his remarks on the essay, he sounds a bit like Coleridge on the composition of Latin verse in the English schools of his day.

But he goes on to say that


Indeed one can master one's own mother tongue only by way of the dead languages: without instruction in Latin one will never learn to write a precise, clear, and fluent German, and without Greek never a philosophical German; and in fact, there have been no classical German stylists who were not practiced in Latin. And the greater diffusion it once had in the middle classes is the reason that until the beginning of the twentieth century one so seldom encounters wretched German in letters, diaries, and other written work; while since then--powerfully aided by the newspapers-- it is almost the rule in private correspondence. The worth of the classical curriculum is proved less by those who had it, than by those who did not.

I don't know that this is the case for English. The barely-schooled Abraham Lincoln comes to mind as a counter-example; but then drawing inferences from genius is risky. It is true that the general level of English prose these days is pretty bad, and that the remaining classicists seem to write a lucid prose.
Posted by George at 3:32 PM No comments:

When the weather is not too hot for it, I walk to or from work about three days a week. The distance is a little less than three miles by the shortest route, which follows 16th St. NW and requires about an hour. Long ago, I learned the timing of the lights on U through P Streets. At an easy walk, the pedestrian who begins to cross U St. just as the light changes to green will arrive at the next five lights just as they turn. It may be possible to do the same at a very brisk walk, but I haven't tried it.

There have been times that I was in the middle of a block coming toward the next light and thought by the number of seconds shown on the pedestrian signal that I could hurry and cross. This has never worked, though, and eventually I noticed that the light will, at least some of the time, jump ten seconds suddenly. Today I watched one light, probably at S St., as the seconds display went from 16 to 6. I wonder idly whether the count ever runs down all the way by seconds, or whether the jump is constant on these lights. I think that I have seen the same behavior at one of the L St. intersections, a bit southwest of these.
Posted by George at 3:45 PM 2 comments: