A Tag for our Times

At least the first clause of Aenas's question seems curiously apposite for the season of COVID-19:


Hast thou no hand-clasp true, nor interchange
of words unfeigned betwixt this heart and thine?

(Having appeared in indifferently poor disguise, Venus has given Aeneas some useful information, and is disappearing just as he recognizes her.)
Posted by George at 11:46 AM No comments:

Over the last few weeks, I noticed some trees that might have been doing poorly. The bark was mottled and irregular, and there were fallen leaves around them. Last year was hard on some local trees, for the year began with a stretch of very wet months, followed by a dry late summer. I wondered whether these trees might still be suffering,  but apparently they are fine. The Audubon book says that they are Chinese elms, called lacebark elms for the patchy bark, and they do drop their leaves as new growth comes in. 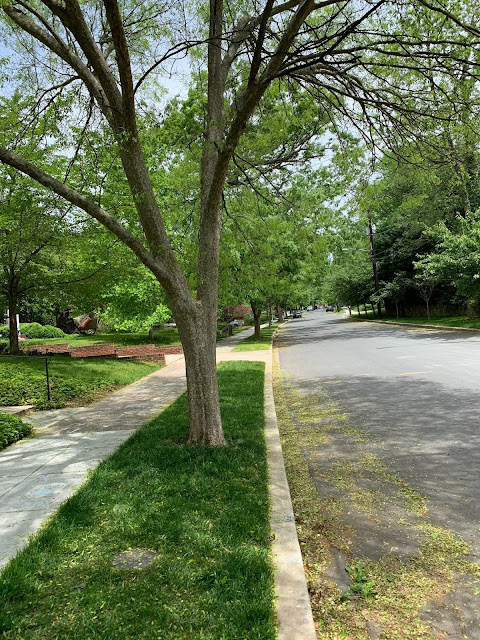 I can't say the bark much reminds me of lace: 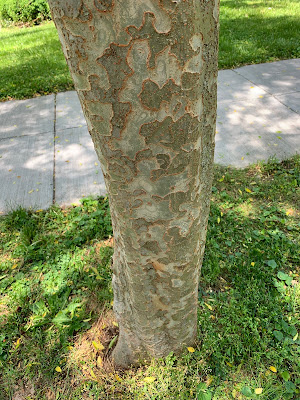 They must have looked like this most years since the city planted them. That I now have noticed them owes to my restricted travel this spring: I pass the stretches where they are a couple of times most days, when other years I might have passed them once or twice a month.

The Price of Wisdom

Today it occurred to me that I might soon wish to read The Structure of Appearance by Nelson Goodman, a fairly well known and well thought of work in the Anglo-Austrian-American tradition of analytic philosophy. Strand Books did not offer a copy. Powell's did, but at $363, a price I really don't understand.  Comparable works that quote Goodman go for perhaps $40 new. I mentioned this to a friend, who said that he had seen a book of Jaako Hintikka's on Amazon for over $1000.

In 2011, there was the curious case of The Making of a Fly, a work of developmental biology that dueling pricing bots bid up to the price of $23.7 million for a copy. Eventually someone noticed, and the price dropped to $135. The bots belonged to a couple of sellers on Amazon. I suppose something like that could have happened with Hintikka's book.

But as far as I know, Powell's sells only its own stock. My friend supposes that the Goodman book--printed long ago--could have come in as part of an odd lot, and that a Powell's employee might have gone to Amazon to see what it ought to cost. That makes as much sense as any conjecture I can come up with.

In Naming and Necessity, Saul Kripke writes that


The average person, according to this [theory], when he refers to Cicero, is saying something like "the man who denounced Catiline" and thus has picked out a certain person uniquely. It is a tribute to the education of philosophers that they have held this thesis for such a long time. In fact, most people, when they think of Cicero, just think of a famous Roman orator, without any pretension to think that there was only one famous Roman orator, or that one must know something more about Cicero to have a referent for the name.

In Chapter 4, "Vagaries of Reference", of Word and Object, W.V.O. Quine does discuss Cicero, Tully, and the denunciation of Catiline by one or both. Quine argues that names in (for example) belief clauses are not referentially transparent,  positing Tom, who is willing to affirm that Cicero denounced Catiline but not that Tully denounced Catiline. Evidently Tom was not a philosopher. But then one of the two epigraphs to Word and Object is the quip "Ontology recapitulates philology."

Kripke mentions Sir Walter Scott a couple of times in Naming and Necessity.  Rudolf Carnap, setting out his language S1 in the first chapter of Meaning and Necessity, includes the constants s and w, designating Walter Scott and Waverly, and predicate Axy, meaning that x is the author of y. I suppose that the popularity of the example traces back to Bertrand Russell's 1905 essay "On Denoting."

Posted by George at 5:26 PM No comments:

I don't know that I had ever seen a ninebark (physocarpus opifolius) before one of the staffers at Behnke's sold us one, and certainly I had not heard the name. Last year, the weather when it bloomed was too rainy to offer many chances to take a picture. But this May is a bit drier, so here is the ninebark: 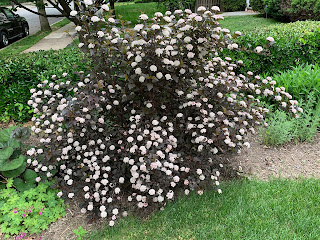 It does not bloom for long, but the wine-colored leaves remain handsome.
Posted by George at 3:53 PM 1 comment:

On March 13, I walked home from work via Dupont Circle, so that I might pick up a book proposed for the neighborhood book club. I considered and rejected the notion of a couple of other stops: at Second Story Books or Lost City Books for quarantine reading; at Pacers for new running shoes. I was carrying a laptop, a couple of pound bags of coffee, and a book, and didn't care to add to the load.

What I did not consider getting that day was a haircut. I don't know that I could have made an appointment, but I wish I had tried. Books you can have delivered, and I think we have had eight delivered by mail (one from Second Story) in the last two months. You can have shoes delivered, and Pacers sent me a very comfortable pair. But you can't have UPS or the USPS deliver a haircut, and I could use one.
Posted by George at 3:16 PM 1 comment: