The viburnum out back is in flower: 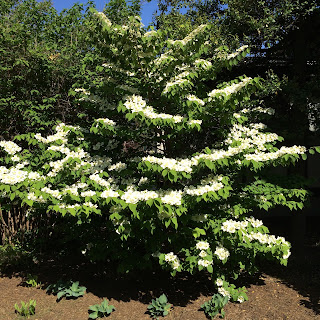 I can't make out from our Audubon Society field guide what sort of viburnum it is; it is not a Possumhaw Viburnum, having flowers that are too large; and the others named in the guide seem to have smaller flowers.

It struck me that Virgil mentions viburnums. I find on checking Perseus that this is in the first Eclogue: roughly, "Rome has raised her head among other cities as cypresses do among pliant viburnums." But of course Virgil's viburnums are no more Possumhaw Virburnums than ours is. The household dictionary gives the Linnean name as "viburnum lantana". The editor Robert Coleman proposes either the "wayfaring tree" (in fact, viburnum lantana) or the  "guelder rose" (viburnum opulus).
Posted by George at 3:44 PM 2 comments:

This morning on I St. NW, I saw this 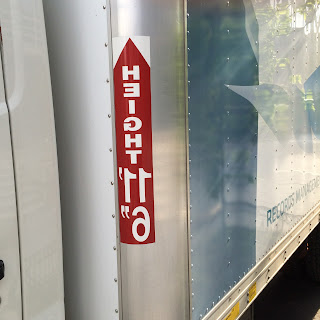 and after a step or two wondering who it was meant for, understood that it was for the driver, who now will never need to look at a sign for a bridge or garage, and wonder whether the truck will make it through: a glance in the left-side mirror will show that.

I remember in my college years arriving in a company van at a garage. The sign announced a maximum clearance of 6'6" or 6'8". I stood beside the van, and did my best estimate of its height, then pulled in, ducking my head at every girder I drove under. I'd have been grateful for such a hint. (Yes, it probably was in the owner's manual, and the owner's manual probably was in the glove compartment, but that wasn't the sort of thing I thought of at 20.)
Posted by George at 3:52 PM No comments:

Last Sunday evening, more cars than usual were parked along the street. Sunday is not much of night for parties, so we supposed that this meant a special liturgy at the Russian Orthodox cathedral around the corner. The next day I looked at the notice board there, and saw that indeed there had been a Vespers.

I also noticed that Matins were scheduled for several evenings in April, but I was a few blocks away before I really thought about evening Matins. A  later look at the notice board showed that this was not an error in translation, that one could have an Utrenya in hours noted as Vechera:

A parishioner who found me looking at the notice board said this happens in Great Lent, when there are many liturgies. There is also at least one morning Vespers.

When I did tech support, I traveled to a couple of type shops on Long Island. One company I knew well, one I did not.

Danny and his wife owned the first one, in Hicksville. Danny was a very sharp guy, and at least a third, maybe two thirds of his support calls followed one pattern: Danny got one of us on the line, started to explain the problem, in the course of explaining the problem arrived at the solution, thanked us, and hung up. It was only later that I learned to call this rubber ducking. My only complaint about this was that Danny talked so fast that I would get out of breath listening.

Data General used to sell a unit, roughly the size of a cradle, that had a 25 MB hard drive and a drive for 8" 1.2 MB floppies, the latter generally used to back up the former. The hard drive seemed to suffer more minor failures than other units, perhaps because it was driven by a rubber belt; once I was at a customer's shop and heard a small bang when the belt dropped off, stopping the computer dead. Danny had one of these, though by now his main unit was a more reliable 73 MB drive, and so did the other fellow.

I don't remember the name of the man who owned the other shop. As at many of our customers, the system manager was the senior typesetter, who had arrived at that position by quick and accurate typing, not through any knowledge of computers. She was intelligent, but not particularly interested in computers. She was diligent in following the backup procedures, which backed up the hard drive to the floppies. But one day the backup required one more floppy than she had. She examined her directions, which I think were her predecessor's slightly more cryptic summary of the cryptic directions we provided. It appeared that she needed to format another floppy disk, and so, on a plausible reading of her instructions, she started a format of the hard drive. Fortunately, this failed (as it usually did) before destroying too much data. Unfortunately, it left the system unable to start. They called us, we called the travel agency, and I caught a plane to MacArthur Airport to see about salvaging data and putting the system back into working order.

This unit seemed to have developed other problems along the way, according to the field engineer. I ended up calling Danny, who had stepped up to the larger drive, and who kindly agreed to lend us his. The field engineer racked it into place, and we set up the new unit and started to transfer the data. About 7 pm, the lead typesetter went home. About midnight or one, I decided that needed rest. I called the local taxi company for a ride to a hotel, and went outside. After half an hour of waiting in the cool spring air for the cab, I went back in, and kept working. By the afternoon, the system was usable again, and I headed for MacArthur.

Some time, probably quite some time, later, Danny remarked that he had never got his drive unit back, and that the other guy didn't return his calls. That winter, I was at Danny's shop for an upgrade, which included a new 360 MB drive to go with the 73 MB one. I don't remember whether the new operating system even supported 25 MB drives; I doubt it did. I do wonder whether the other guy ever thanked Danny for bailing him out.

(One can walk into the drug store these days and purchase a 32 GB USB drive, that is to say, one that will hold more than 1000 times the data that was on these old 25 MB units. It will take up the space of a pack of chewing gum, and you'll get change back from your $20.)
Posted by George at 3:42 AM No comments:

For this afternoon's run, I chose a route that took me by the corner of Massachusetts and Wisconsin Avenues NW, which is to say past National Cathedral. As I headed up Wisconsin toward Macomb, it seemed to me that a woman turning into the driveway of the cathedral was dawdling. Once she was past and I was crossing the drive, I had a look to the right and saw a man leading two small boys, probably about five and about nine, each wearing a blue blazer and a kilt with a predominantly red pattern. It seemed to me that perhaps the woman had slowed because she couldn't believe what she was seeing.

Then, as I was about halfway to the other end of the driveway, the bagpipes started. This seemed to deserve a closer look, so I cut back on the walk. For one of my uncorrected vision, there wasn't much to see but people standing near some pipers. However, as I turned back to Wisconsin, there came a man of middle age wearing jacket, tie, and blue-green kilt. I asked him, and he explained that this was the Kirkin o' the Tartan, a ceremony that raises money for Scottish-American scholarships. (I had to look this up when I got home, for it sounded as if he said "Carkin".)

It seemed to me that the the Saint Andrews Society of Washington, DC, might more appropriately have set the Kirkin at the National Presbyterian Church, something less than a mile farther out toward the Maryland line, than at the Anglican cathedral. But I see that a reception followed, and the cathedral has much more in the way of restaurants nearby.
Posted by George at 5:01 PM 1 comment:

The Federal Writers Project of the Works Progress Administration (WPA) created guides to the forty-eight states and the District of Columbia. The usual state guide fits comfortably in the hand: I judge from memory that the guide for Pennsylvania was about 450 pages. The guide to Washington, DC, Washington: City and Capital runs to 1140 pages including the index. After WW II, George Washington University brought out a much abridged version of about the size of the usual state guide. But why not have the real thing?

I mention this because today at Second Story Books I noticed a copy of the 1937 edition for sale. They have priced at $40; my own copy, purchased more than thirty years ago, has $35 penciled up front. I know that I bought it on sale, probably 40% off,  ergo $21; but in constant dollars that must be more than today's $40. I'd have bought this copy, but who would I give it to?

Washington in 1937 was a very different city. It was segregated by law, for one thing. The guide has a chapter of about 30 pages on "The Negro in Washington", and mentions the segregated schools in passing in the few pages given to the District of Columbia government. It was much smaller, for WW II began a great increase in the size of the government. The War, Navy, and State Departments still occupied what is now the Old Executive Office Building: it was only in 1941 that War and Navy left for the Pentagon, after the war that State moved to Foggy Bottom. The Smithsonian was much smaller. The Mall had temporary buildings left from the expansion of WW I. The suburbs gave way to countryside much nearer the city.

The book would not serve a tourist well today, even one strong enough to carry it without tiring. It places the National Gallery in the Natural History Museum at 10th and Constitution. Other institutions have moved or become known by other names. Washington then had streetcars and no Metro. But for the  person interested in a Washington that his parents or grandparents may have visited, the book gives a useful picture.
Posted by George at 4:20 PM 4 comments: