We spent about a week in Belgium and the Netherlands, and had a constant feeling of awkward familiarity. Dutch is similar enough to German that I feel I should be able to read and follow it, but of course I can't really. The Antwerp cathedral provides a liturgical pamphlet, and there I was able to spot cognates in the readings: "terug" = "zuruck", "dienaar" = "Diener", 'deel" = "Teil" (and is related to the English "deal"; it is odd to think for a moment that one read that Mary has chosen the better deal). The straight narratives, Genesis and Luke, were almost readable; Paul, with theological reflections, definitely not.

And then there are physical resemblances. Quite a bit of the population of Amsterdam looked like second cousins or shirt-tail relatives that I really should remember. Well, a lot of my ancestors lived in northwestern Germany, not far from the modern border.

The bicycling culture interested us, with persons everywhere on  bikes, sometimes with a dog in the basket, children in a tub, or goods in a locking container. I think it more practical for a city such as Amsterdam,which has no visible grades, than for one like Washington, where one has the flat and fill, then a steep grade up to piedmont. I have not in many years seen so many of what we called "girls' bikes", with the lower crossbar to accommodate a skirt.

It was unusually hot in Amsterdam. It occurred to me one night that the last time I regularly slept in hot weather without even a fan would have been the summer of 1980. Then, though, I was in a suburb under tall trees, not in a built up city. I slept, but would have slept better with a fan.

On the way off a KLM flight today, I noticed a screen stating that KLM offered "the aiport experience." It seemed to me that the copywriter, ad agency, and marketing department must all be out of touch to suppose that anyone enjoys "the airport experience". We had worried about making our flight while in the baggage-check and security lines at Schiphol. Then at Dulles, after seeing KLM's offer, we took thirty-some minutes to get through passport control. The queues wound enough that I came to recognize a dozen families or couples as we passed and repassed each other. Our luggage was off the belt before we arrived to look for it.
Posted by George at 6:30 PM 5 comments:

Buried Under the Path

Yesterday we visited the Begijnhof in Amsterdam. We saw the small Catholic chapel, and the outsides of residences and the English Reformed Church. We did not see, at least I did not, the marker for the grave of Cornelia Arents, a beguine who arranged for burial under the path to the church, as penance for the conversion to Protestantism of certain relatives. An alternative version says that she considered the church as desecrated by the English Reformed takeover.

An early Catholic bishop of New York supposedly asked to be buried under the pavements, though as a reproach to his flock. The churches of Europe are full of grave markers in the pavement--perhaps the point was to be buried outside.
Posted by George at 11:31 PM No comments:

These turned up as volunteers in the side yard: 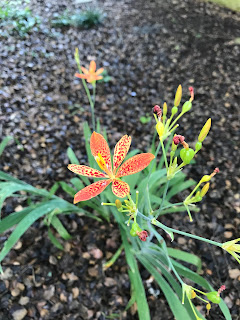 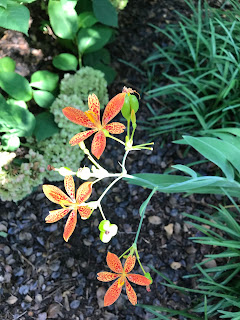 Evidently the flower is a member of the iris family. We suppose these were planted by one or more of the birds that perch in the holly tree above them.

Cynthia Haven has noticed an article in The Chronicle of Higher Education on the tyranny of trendy ideas. The article is amusing, the trendy ideas are properly silly, but some of them have little relevance for those of us outside the academy. Some of them make me think of a summer thunderstorm--underneath there is violent weather, two miles away one hears the sound and gets a bit of wind, and twenty miles away nobody knows that it happened. I'm sure that Project 2021 was a big deal in Austin, but did anyone outside the academy hear of it in Norman or Baton Rouge?

On the Fourth, we had friends over for dinner. At some point one of the conversations turned to reading. One man's sister has been fighting with her son's school districts over reading instruction. The sister finds that "whole-language" instruction is not teaching her son to read, and pushes for phonics. A woman in the conversation had been through the same quarrel as a teacher in Brooklyn, almost fifty years ago. This surprised me. I don't follow trends in elementary education, and the last time I noticed, phonics seemed to be making a comeback. But it appears that the contention between "whole-language" and phonics never really ends, just has one or the other on top for a while.

What is taught in the schools of education affects large numbers of children. It could be a child's chance, as it was mine, to arrive in sixth grade just at the New Math does. Or as it was my brother's chance, to arrive in the parochial schools when they set phonics aside for whole-language. Some of those children will take no harm, as we took none. Others will be promoted without mastering the skills said to be taught, or just alienated by busy work that teaches them nothing.

The tyranny of trendy ideas that should be overthrown, and probably never will be, is the tyranny of trendy ideas about elementary education. Americans are simply too willing to believe that there is something other than tedious, painstaking work that will teach their children to read, write, and reckon. I know that I say this often; but those who disagree needn't worry--many more qualified, many famous persons have said this for years with no effect.
Posted by George at 3:02 PM No comments: