Am I wrong to detect a hint of competitiveness there?

In any case, Tocqueville and Beaumont undertook some difficult journeys through sparsely settled country. In  "A Fortnight in the Wilds", he tells of a long day of about forty miles from the Flint River to Saginaw, the latter described by his host in Pontiac as "the last inhabited point until you come to the Pacific Ocean."  Getting to the Flint River required forest travel as well, and brought them to a house with a bear chained up outside.

"A Fortnight in the Wilds" is printed in Journey to America. The bulk of the book reminds one that Tocqueville did come to American to visit its civilization, not its forest. But there were plenty of forests remaining between the centers of civilization. Unfortunately, Yale University Press has let it go out of print.

Posted by George at 7:03 PM No comments:

Fifteen or twenty years ago, The New York Times ran a piece by Margo Jefferson. I no longer remember the burden of it, but I remember that she said that she sometimes listened to country music. In talking to friends who knew more about it, who perhaps had grown up with it, she tried to distinguish between the good country music and the rest; but they rejected the distinction. On the other hand these friends made the same sort of distinction in the music that Ms. Jefferson preferred, and she rejected their distinction. (Ms. Jefferson is African-American: how she characterized her preferred music I don't remember.) At the time I thought that I agreed with her about country music and with the country fans about hers, and I quickly forgot about it.

I thought of that this week when I encountered in The Autumn of the Middle Ages, Chapter "Image and Word", the paragraph


Contemporaries who see the works of art being born accept them without question into their life dream. They do not appreciate them on the basis of objective aesthetic perfection, but on the basis of the resounding reverberation within them of the sacredness or passionate vitality of their subject matter. Only when the old life dream is dreamed out with the passing of time, and sacredness and passion have vanished like the scent of a rose, only then, by virtue of its means of expression, that is, its style, structure, and its harmony, does the purely artistic effect of a work of art begin. These elements may actually be the same in both the fine arts and literature, but they may, nonetheless, generate an entirely different artistic evaluation.

In the United States, one need not wait for a life dream to be dreamed out. One can just get in the car and drive twenty miles to find another that displaces it.
Posted by George at 2:52 PM No comments:

In Huizinga's The Autumn of the Middle Ages, Chapter 4, The Forms of Love, I noticed the paragraph


Reality is at any time more wretched and cruder than the refined literary ideal of love sees it, but it is also purer and more ethical than it is represented by that shallow eroticism which is usually regarded as naturalistic. Eustache Deschamps, the professional poet, lowers himself in many ballades, in which he has a speaking part, to the most debased transgressions. But he is not the real hero of those indecent scenes, and amongst them we suddenly find a tender poem in which he points out to his daughter the virtues of her dead mother.

In A Skeptic Among Scholars, August Frugé writes of the poet and translator C.F. MacIntyre that


It may be that Mac was wilder in his youth, before I met him, than he was later, but I knew him through most of his time as an outsider. Behind the rebel facade lurked a family man manqué. In his unpublished novel on the life of Tristan Corbière, which he let me read, the sex scenes--based presumably on experiences with female students--were rather unreal, while the scenes of son with parents were truly felt and convincing.

Posted by George at 6:14 PM No comments:

NPR announced this morning that it is University Press Week. Considering that the week was first proclaimed 40 years ago, I am a bit surprised never to have heard of it. The events listed by the Association of University Presses are out of town, in New York and Miami. I'm not sure how those of us not in those two cities, and not employed in publishing should honor the week. Buying a book or two published by a university press might be a good way. Three days remain in the week.
Posted by George at 6:04 PM No comments:

The most recent translators of Schopenhauer's On The Fourfold Root of the Principle of Sufficient Reason did an excellent job, as far as I can judge. One decision, though, repeatedly caught my eye.

The translators give the original words in footnotes for technical German terms and for quotations from other languages. The former practice is what one could wish for: it is frustrating to read a work of philosophy and have to guess what word in the original an English word corresponds to: does "being" stand in for ens or esse? Does "idea" replace Idee or Begriff? The latter practice does maintain the flow of the argument.

E.F.J. Payne, the translator of most readily acquired version of The World as Will and Representation simply included the quotations untranslated, then gave his translation into English in a footnote. This meant that one could have as many as three versions on the page, the first two from the original: Greek, since that was the source; Latin, since some of us with Abiturs may have forgotten our Greek, but all can be counted on to remember our Latin; and English in the footnotes for the paying customers. In The Fourfold Root one has only two versions to deal with, one almost always English.

Almost always; for it is an exception that caught my eye. The authors not unreasonably render the Greek κατ᾽ ἐξοχήν as par excellence. Yet to find French words in the text italicized and footnoted with the Greek original looks odd the first time, and funny the sixth. Still, I do realize that par excellence is long naturalized, and I don't know what I'd offer to replace it. Eminently?

Posted by George at 2:02 PM No comments:

I often check the Hacker News to see what topics interest the tech world. Perhaps 60% of the linked items have to do with computing, science, or mathematics, another 20% to do with politics or economics, and the remainder can be curiously assorted. Over the last couple of days a link to an article about whether Nero killed Agrippina has been in the first few pages.

Though I do now and then see them, I don't go to Hacker News looking for links to pieces about the humanities. I was surprised, then, today to see what was evidently an item by Cynthia Haven about René Girard on the first page, ranked #18: 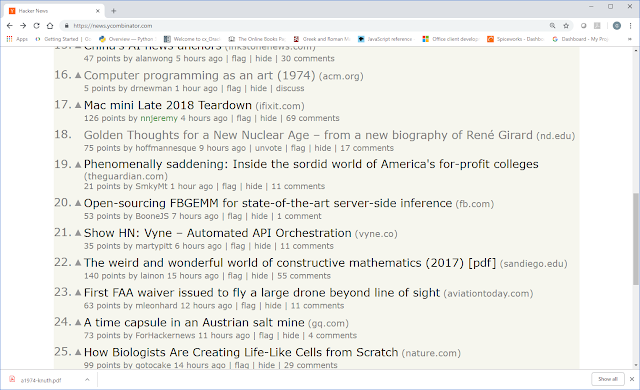 Professor Haven tells me that the linked site slowed to a crawl under the traffic that Hacker News directed its way. I hope that the site will have found some new readers to make up for the load.

A sometime co-worker has made it to the first page of Hacker News a few times. However, his blog mostly has to do with old computer hardware, which suits what I take to be the interests of most of the Hacker News readership. I am interested to see that the techies find mimetic desire so well worth reading and arguing about.

Another Specialty of the House

We drove up to Mechanicsburg, Pennsylvania, Friday night for the birthday dinner of a friend. A bit before 1 pm on Saturday, we drove to the West Shore Farmers Market in Lemoyne to meet a relative and to do some shopping.

A stand that I will not name had promised to have some hog maws for my wife. When she asked for them, the manager said that he had supposed she would get them Friday, and so had sold them to another customer Saturday morning. He referred her to Schaffer's. Schaffer's, may its name be praised, had four on hand to sell her. We have purchased hog maws a number of times over the years, generally at the West Shore Farmers Market; but this was the first time we purchased from a butcher without prior arrangement.

The Bookworm upstairs has its own specialties, including volumes of Norman Mailer in languages including at least German. There were four or so copies of  Die Heere der Nacht and something involving a bear hunt (Why Are We in Vietnam, or an excerpt from it?). I have no desire to purchase these, but find it reassuring to know that they still are there. And I was glad to find a boy of about one sitting on the floor when I got there, gesturing at books near his eye level, and a brother and sister between seven and ten looking over books at a table outside the main area of the store

Posted by George at 4:46 PM No comments: