Seen about the middle of June in front of the Masonic Temple on 16th St. NW between S and Riggs: 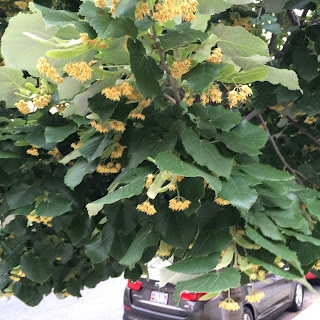 I think this is a European linden, but it could be one of that linden's American cousins. By now the flowers have dried up and mostly fallen off, and the fruit has appeared. It occurs to me that this is something of a European block as far as the trees go: the other trees in front of the temple are English oaks.
Posted by George at 3:47 PM 2 comments:

This Intolerable Deal of Sack

Having looked into Utopia in Power: The History of the Soviet Union from 1917 to the Present (published in 1986), I found the results of inquiry into alcohol consumption in Lithuania during the 1970s:


The average resident of this region (note that Lithuania is one of the most culturally advanced republics of the USSR) spent 330 rubles on vodka and 3 rubles on books.

That is not quite as bad as Falstaff's ratio of expenditure for sack and bread, which is something greater than 136 to 1, yet it is impressive. But a friend who spent some time in the Soviet Union during its late days offers some context: a ruble would buy an art book, 35 kopecks a hardback novel. Given that Utopia in Power reports a 28.5 liter per capita consumption of vodka at that time, one can say that a liter of vodka cost about 11 rubles, roughly 30 times the price of a novel. My most recent purchase of a hardback novel was for about $19. I have never contemplated the retail purchase of a bottle of an alcoholic beverage costing even four times that, let alone thirty times.

Still, do any of us but teetotalers manage a ratio weighted to the book side?  I doubt that the general population of the US does. Alcohol is heavily taxed, and books take time to read. The Census figures are not quite clear, but it appears that in 2014 wine, beer, and liquor stores had sales of about $34 billion, book stores had about $9 billion.

Posted by George at 5:12 PM No comments: 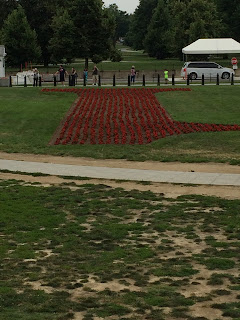 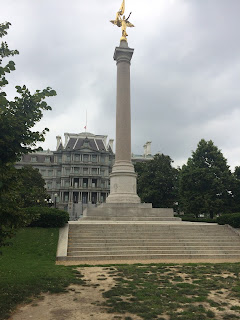 The red numeral is the insignia of the US Army's 1st Infantry Division, which therefore is known as "the Big Red One". The monument base names battles fought in WW I, the war to end all wars: the campaigns of WW II are on a smaller slab of granite off to the west.

I had never seen the flowers. A guard told me that indeed they are planted every year. I neglected to ask, and don't know whether they arrive for the anniversary of D Day--the 1st Division landed at Omaha Beach--or for the birthday of the US Army (June 14), or simply when such flowers bloom.
Posted by George at 3:32 PM No comments:

Today's New York Times carries an editorial with the title "The GOP's Latino Crucible." I think that somebody must have reached for "quandary" and come up with "crucible", for I can think of no sense in which the situation discussed in the editorial can be said to be a crucible. The Republican Party's relation to the Latino residents of the US might be said to be a test that will separate the base from the better metal, which test could involve a crucible; but this metaphor is not followed up and to my eye is not even implicitly present. The Republican Party is not, according to this editorial, serving as a melting pot.

I found it odd enough when Times book review headlines included "forged in a crucible" or "bred in a crucible".  But apparently now the word has lost any relation to its original meaning, and may be attached to any sort of difficulty. I see no use in complaining further.

Posted by George at 1:32 PM No comments:

Yesterday evening at dinner some of the conversation ran on unsatisfactory books we have read through one or the other of the book clubs we belong to. Once home, and while about to settle into bed, I opened a volume of Novalis, and found a paragraph running roughly


Many books are longer than they appear. They have in fact no end. The boredom that they arouse is truly absolute and infinite. [A series of unknown--to me--authors] have produced excellent examples of this sort. It is a a collection that everyone can add to from among the books of this sort that he knows.

If absolute and infinite boredom requires temporal infinity, then I must disagree. If it simply implies complete indifference to a book and despair of ever overcoming that indifference, then I have some candidate volumes.
Posted by George at 5:05 PM 1 comment:

Last week, I found myself trying to type a GMail message, and waiting tens of seconds for the characters to appear. Lately, the cheap netbook I use at home has been running at 100% busy whenever Chrome is open. Task Manager shows multiple Chrome processes running even when I have one tab open; I suppose the extras may be from those little panes that show the six recently visited sites. Why should a web browser make the computer hard to use?

I like Chrome. Thursday and Friday I spent some time in Chrome, inspecting page elements and testing snippets of Javascript in the console, and I do that every few weeks. I could, I guess, do the same in Mozilla, but I'm used to Chrome. And on my much beefier machine at work, Chrome's demands don't matter that much.

However, Chrome will not be the reason I upgrade the home machine. I have downloaded Firefox, which for now will be my usual home browser. I don't like its look quite as much, but I can type emails at a reasonable speed.
Posted by George at 7:11 AM No comments:

Federalism and the Household Budget

The musical "Hamilton" will play at the Kennedy Center during the 2017-2018 season. The Kennedy Center has made it known that the best way to ensure that you will be able to buy a ticket is to purchase subscriptions for the 2016-2017 and 2017-2018 season. At the current rate, that would cost about $1000. I suppose that is reasonable if one likes the rest of what the subscriptions comprise.

The June newsletter from Second Story Books offers John Adams's A Defence of the Constitutions of the United States, three volumes, printed in London in 1794, for $3500. At this point, I'm not sure I have the stamina for three volumes of unmixed John Adams. (His correspondence with Jefferson, collected in two volumes, is very readable.) If I did, and if my budget for reckless purchases were a few times larger, on the whole I'd rather have the books than the tickets.
Posted by George at 3:38 AM No comments:

Yesterday I walked to the Barnes and Noble store at 12th and E Streets NW, to discover that it was gone. Now Barnes and Noble is represented in the District of Columbia only by the college bookstores it runs. One must go to Clarendon, Alexandria, or Bethesda to shop at a Barnes and Noble that is not in the textbook business.

I never liked Barnes and Noble as much as I liked some of its competitors. It hadn't the breadth of technical books that one could find at Borders. The choices for literature and history weren't up to Borders or to Olsson's. But Borders and Olsson's are gone, five and eight years since. Barnes and Noble was still there, selling books, music, and maps, until it wasn't.

There would have been a time about fifteen years ago when I could walk within twenty minutes to any of
Reiters survives, much diminished. It always primarily carried technical books. At this point, college and religious bookstores apart, Washington, DC (for new books) is in the hands of the independent stores: Bridge Street Books, Kramerbooks, and Politics and Prose chiefly.
Posted by George at 5:17 PM 1 comment:

A fair piece of Lafayette Square was behind yellow tape today, because of this broken willow oak: 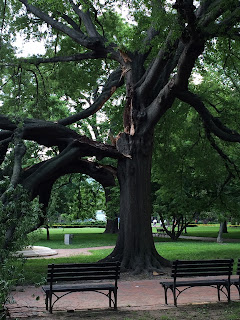