The first costume I saw today was on a beagle in my neighborhood. It had a slug costume, with eyes on stalks, strapped to its back. The beagle did not appear to be discomfited by this.

The second costume I saw was on a boy about a year old, who wore a pirate hat. He was in a stroller on K St., looking about alertly.

The best costume was worn by a girl on our street, soon to be three years old. She was "a ballerina monster not a scary one a friendly one." She gets credit for coming up with the notion, and her mother for figuring out how to bring it about: short dress, full and frilly below the waist; a goatee draw in, and dark circles around the eyes.

The drizzle that set in about 7:30 may have reduced the number of trick-or-treaters. We gave generously, and have candy left. 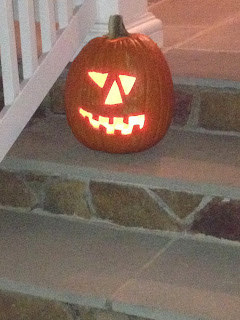 Posted by George at 6:56 PM No comments:

First about 8 am at 16th and K Sts. NW,, a man about 60, neatly dressed, with cane or walking stick, and a sign hung from his neck:

Probably I should have stopped and spent $5 to see what the goods were like, but I was in a hurry.

Second, at lunchtime, a hawk, probably a red-tailed hawk, in Lafayette Square. It flew low across the park from the southeast corner to perch in a tree overlooking 16th and H Sts. I walked back that way for a better look, but the hawk flew out southwest.

Third, a few minutes later, on fences along the north side of the Ellipse:

THIS AREA CLOSED
FOR PERMITTED ACTIVITIES

I'm guessing that this means that the National Park Service is not now issuing permits for activities here; the graders at work beyond the fence support this interpretation.
Posted by George at 6:23 PM No comments:

A visit to Carpe Librum turned up a Folio paperback of La Rochefoucauld, and about the first dip into it showed me the maxim that the Gutenberg Project's version gives as

Quite so, but something about the form of it brought to mind a passage of Bagehot's in his remarks on Sidney Smith:


A great deal of excellent research has been spent on the difference between "humour" and "wit", into which metaphysical problem "our limits", of course, forbid us to enter. There is, however, between them, the distinction of dry sticks and green sticks; there is in humour a living energy, a diffused potency, a noble sap; it grows upon the character of the humorist. Wit is part of the machinery of the intellect; as Madame de Stael says, "La gaiete de l'esprit est facile a tous les hommes d'esprit". We wonder Mr. Babbage does not invent a punning-engine; it is just as possible as a calculating one.

Posted by George at 5:03 PM No comments:

Back in August, the New York Times carried an article about the star pitcher of the Grosse Pointe team in the Little League World Series: at the age of 12, he was 6'3" and 216 lb. He was only the second biggest player in the tournament.

This reminded me why junior high school could be alarming. It covers grades 7 through 9, roughly ages 12 through 14, years during which boys typically grow a lot, but at different rates. A man I know says that he turned out for freshman (9th grade) football at Gonzaga weighing just under 100 lb. During his first and only practice, a well-meaning coach took him aside, and told him that there were boys on opposing teams weighing nearly four times that, leaving him to infer for himself the possible results of a collision. Now, I was never one of the smaller boys, but it was late in 8th grade when I started to get my height. A few other boys in my grade appeared to be the size of NFL linemen.. Considered at this distance--from the halls they dominated--probably they were sized only for high school football.  Even so, they could have easily been half again my weight. Most were benign, but only most.

Earlier this year I saw a young woman signing a friend into our office building. The young man had on a tee shirt reading

This also brought junior high school to mind. The usual projectile in dodgeball is a volleyball, but at my junior high we played with what I later learned to be a "Chicago softball". This is a little larger than a regular softball, and a good deal softer: I understand that Mike Royko considered it decadent to see fielders wearing gloves for them. They deform noticeably on impact against a wall or a body, so that it is merely unpleasant to be hit with one, not dangerous. They have less wind resistance than a volleyball, and more mass; they are also more easily grasped to throw, ergo leave the hand at a higher speed and fly straighter. In the hands of a 180 lb. eighth grader, they are intimidating.

Well, we survived, most of us anyway.

Posted by George at 4:27 PM No comments:

Carpe Librum Is Back, Indefinitely

A co-worker I introduced to Carpe Librum last spring returned the favor last week by telling me that it is back. It is in the spring location, on the west side of 17th St. NW, between K and L Streets. One of the back rooms it had is no longer open. There is less stock, and less room to show it.

But there are books worth buying. It is strongest in the General Fiction heading. It has many books in the biography and memoir section. To be sure, it is down to a couple of copies of Eat, Pray, Love from the spring's 30. But it had, till I bought it, a book with letters and diary entries by Barbara Pym, and it has The Road From Coorain. The history section has Becoming Charlemagne, and an odd-looking book proposing that Homer understated the scale of the Trojan War. I will shortly unload on Carpe Librum three or four books I have been meaning to give away.

I suspect that reappearance of Carpe Librum at such a location has as much to do with a weak market for commercial real estate as with a thirst for used books or a will to support reading programs in the Washington, DC, public schools. But those wishing to support the efforts of its sponsor, "Turning the Page", can attend Carpe Noctem this Friday at the Washingon Post building on 15th St. NW.
Posted by George at 2:56 PM No comments:

About 30 years ago, I happened to be reading two books at the same time, one The History of the United States During the Administrations of Jefferson and Madison by Henry Adams, one a memoir by a writer then well thought of. Eventually I put the second book aside and gave it away. It was moderately interesting, but badly written. The contrast with Adams's prose emphasized the faults of the memoirist's. Reading Adams was like watching an excellent carpenter drive nails; reading the memoirist was like watching a duffer, myself perhaps, bend them.

During the past few weeks, I have been reading a book on the teaching of English as a second language, grateful for some of the advice, but struggling with the prose. There are sentences such as


In weighing in on the benefits and drawbacks to using assigned textbooks, the most promising practice is to select a text that corresponds as closely as possible to the needs of your learners, the program, and the teacher, and supplement it with activities from teacher resource books, authentic materials, or learner-generated texts as needed.

(I should remark that "authentic texts" are any not written for use in teaching English; a driver's manual is an authentic text and so is A Million Little Pieces.)

Last night I opened a book just given to me by friends, Thucydides: The Reinvention of History by Donald Kagan. A few pages in I was distracted by the feeling that something unusual was happening. After another page or two, I knew what it was: I was reading lucid prose. Any paragraph I have seen so far can serve as an example. A sentence most of the way down page 11 runs


The student of social behavior--that is, the historian--has a dual responsibility: first to seek out with diligence and accuracy the truth of what has taken place, and then to interpret the events with wisdom and understanding, in this way making a permanent contribution.

Since I am reading the book on ESL for instruction rather than amusement, I will finish it. But I had much rather read Kagan.
Posted by George at 6:32 AM No comments:

The sailors of Annapolis, Maryland, celebrate the Spring Equinox with "The Burning of the Socks", a ceremony I have never seen, and am grateful never to have found myself downwind of. The notion is that one does not wear socks on a sailboat during the warm season, understood to run from the Spring Equinox to the Autumn Equinox. I have sailed on the Chesapeake Bay only seldom, and long enough ago that I can't say whether I honored this rule.

Still, there does come a point in the spring when my costume around the house becomes shirt, shorts, and no socks. I don't suppose that point is just at the equinox, for I consult comfort above calendar, which might mean late April or even May. As the fall approaches, I find it cool, and wonder whether the season is over. Lately, I've tried to make it to October. This year, I felt almost uncomfortable for the last week of September, and began to wonder whether I was carrying the notion too far. But I was out of the house the first of October, and about that time it turned warm again, even hot.

We are back to October weather, though, and I guess that the socks are here to stay.

For the Happy Warrior? when I saw in 17th St. NW yesterday. On a second look, I suppose that "aggressive" might describe the early start and the length of happy hour.

But it recalled a passage from Evelyn Waugh's letters:


Randolph [Churchill] dined with the Lampsons the other evening & Lampson sent a pompous and jaggering cable to Winston 'Your son is at my house. He has the light of battle in his eye'. Unhappily the cypher group got it wrong and it arrived 'light of BOTTLE'. All too true.