This afternoon I was reading W.G. Sebald's novel Austerlitz, feeling a bit torpid, when I encountered the description of Austerlitz's foster father, a Calvinist Methodist minister,


conjuring up before the eyes of his flock ... the lurid fires of purgatory.

This did get my attention. One then reads that


[A]t the end of the service quite a number of them went home looking white as a sheet.

John Calvin would I suppose not have been left white as a sheet by such a sermon. He would have come away unhappy, though, for he regarded the doctrine of Purgatory as a blasphemy.

Sebald is not the only writer around the turn of our century to have a loose grasp of who in particular believed in Purgatory. In the movie "A Royal Affair", set at the 18th Century Danish court, a chaplain, necessarily a Lutheran, threatens some servants with a turn in Purgatory. He also speaks of mortal sin, a term not I think much used in Lutheran doctrine.

I was about to reply to one of Nige's posts, and decided that there was just too much to type or paste into the comment box. Anyway, here is John Jay Chapman on Margaret Fuller and Ralph Waldo Emerson:


This anæmic incompleteness of Emerson's character can be traced to the philosophy of his race; at least it can be followed in that philosophy.There is an implication of a fundamental falsehood in every bit of Transcendentalism, including Emerson. That falsehood consists in theory of the self-sufficiency of each individual, men and women alike. Margaret Fuller is a good example of the effect of this philosophy, because her history afterward showed that she was constituted like other human beings, was dependent upon human relationship, and was not only a very noble, but also a very womanly creature. Her marriage, her Italian life, and her tragic death light up with the splendor of reality the earlier and unhappy period of her life. This woman had been driven into her vagaries by the lack of something which she did not know existed, and which she sought blindly in metaphysics. Harriet Martineau writes of her: "It is the most grievous loss I have almost ever known in private history, the deferring of Margaret Fuller's married life so long. That noble last period of her life is happily on record as well as the earlier." The hardy Englishwoman has here laid a kind human hand on the weakness of New England, and seems to be unconscious that she is making a revelation as to the whole Transcendental movement. But the point is this: there was no one within reach of Margaret Fuller, in her early days, who knew what was her need. One offered her Kant, one Comte, one Fourier, one Swedenborg, one the Moral Law. You cannot feed the heart on these things.

Having quoted that, I acknowledge the fault of reading about Margaret Fuller while never thinking of reading her. Well, maybe this year I will.
Posted by George at 3:43 PM 1 comment:

Duct Tape and a Marker

At the beginning of 2019, I noticed an old Ford Taurus some blocks away. It had the driver's side front window broken out, and a Pennsylvania transit tag. I wondered whether it had been stolen and abandoned. I mentioned it to one of police officers who sometimes park and wait in the church parking lot across from the end of our street. He may have looked at the car, but nothing happened. My wife remarked that the police can't tow in our neighborhood unless a car has expired tags. The transit tag expired on February 1: 2/1/19

A day or two after the beginning of that February, I happened to remember the car, and had a look. Someone had put a strip of duct tape across the bottom of tag. The 1s and 9 had been extended with marker, the "2" had become a "3", and now the tag appeared to expire on 3/1/19. The missing window was covered with plastic. Of course, April required some more creative work. At some point the broken window was replaced, and a sign was taped on, offering it for sale.

I pretty much forgot about the car until one summer morning I noticed broken glass on that street. I looked about for a car with a broken window, and spotted the Taurus across the street, with plastic over the back left window this time. The transit tag now appeared to expire on 8/1/19.

A mile or so south of here, where one needs a zone permit to park for more than a couple of hours, this would never happen. The parking enforcement staff patrol constantly with license-plate readers, and issue tickets all the time. The Taurus would have been repeatedly ticketed, and probably towed early in February 2019. But our neighborhood does not have these restrictions on parking. There are fewer opportunities to write tickets, and the enforcement staff seem to come around less often.

A couple of months ago, I noticed the Taurus again, again with driver's window broken out. By then I was wondering whether it was a bait car set out by the police. I did not care to call the 4th District to inquire, and perhaps bring more trouble on an owner apparently down on his luck. Had the car been parked on my block I might have decided otherwise.

A few weeks ago I saw a notice to tow on the windshield. The grounds stated were lack of valid tags--duct tape and markers go only so far--and apparent inoperability. Yesterday I saw that the car was gone. I assume the city towed it.

I suppose that the National Park Service owns the guardrails on 16th Street NW just north of the bridge over Piney Branch  Parkway, as being on ground belonging to Rock Creek Park. There are wooden guardrails elsewhere in the park, though none I remember as quite like these, logs set on posts: 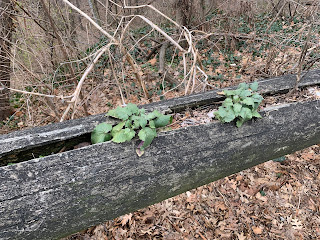 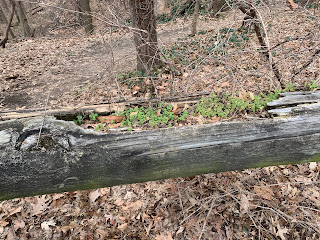 Some of the logs are still sound, in that they aren't cracked with plants growing in them, but all are more or less splintery. There is a gap of about three feet in the rails, left as I recall by a young man who some years ago--I suspect he didn't manage the oblique left from Arkansas Avenue to 16th Street. Well, that missing rail served its purpose by keeping the car from heading into the ravine.
Posted by George at 6:22 AM No comments:

A friend passed along the supplements to H.L. Mencken's The American Language in January. It took some discipline to read anything else for the next couple of weeks.

Supplement Two a section given to American names, with much interesting matter. I had never suspected the presence of the Welsh "Ap" in such names as "Powell" (Ap Howell) or "Pugh" (Ap Hugh). I had some notion of the butchery worked on unfamiliar names at American ports of entry, and of simplifications worked since. That General Pershing's ancestors were Pferschings I had never heard.

Mencken gives lists of both women's and men's names that he considers to have been chosen for novelty. Some would not now raise an eyebrow, having been made familiar through show business--Bette, Mariel, Petula--or otherwise, for example Darlene. Many still stand out as eccentric (Vomera), others lack only an adjustment to their spelling to be standard, as Calista.

In the list of surnames Mencken thought unusual, I saw "Pancake". According to my father, his father spoke of a cousin who married a Pancake. My father supposed the name to derive from the German "Pfannkuchen". In the late 1970s, the writer Breece D'J. Pancake published some excellent short stories. At the moment, the president of the Association for Computing Machinery is Dr.  Cherri Pancake, professor of electrical engineering and computer science at Oregon State University. The Pancakes don't seem to be going away.
Posted by George at 2:51 AM No comments:

In "Knowledge Viewed in Relation to Professional Skill", the eighth discourse of the first portion of The Idea of a University, Newman quotes at some length from John Davison, who argued against The Edinburgh Review's advocacy of strictly useful education. Among the passages,


In short, a man is to be usurped by his profession. He is to be clothed in its garb from head to foot. His virtues, his science, and his ideas are all to be put into a gown or uniform, and the whole man to be shaped, pressed, and stiffened, in the exact mould of his technical character.


Now of all the those who furnish their share to rational conversation, a mere adept in his own art is universally admitted to be the worst. The sterility and uninstructiveness of such a person's social hours are quite proverbial

reminded me of a passage in The Book of the Courtier, First Book, section 17, which recounts


what in polite society a worthy lady said to a certain man (whom I do not now wish to name) whom she sought to honor by inviting him to dance, and who not only declined this but would not listen to music or take part in any other entertainments offered him, but kept saying that such trifles were not his business. And when finally the lady said to him, 'What then is your business?' he answered with a scowl: 'Fighting.' Whereupon the lady replied at once, 'I should think it a good thing, now that you are not away at war or engaged at fighting, for you to have yourself greased all over and stowed away in a closet along with all your battle harness, so that you won't grow any rustier than you already are': and so, amid much laughter from those present, she ridiculed him in his stupid presumption.

Posted by George at 3:50 PM No comments: