Pictures at the Zoo

In Chapter 4, "Don't Ever Become Sentimental", of  Joachim Fest's Not I, there is picture of him with his two brothers, taken at the Berlin Zoo in 1933. The older two boys are holding lion cubs; the youngest shares a chair with the middle brother and holds his hand on the cub's hip. The older boys have a look of confidence, the younger seems to be worried about what the camera will make of him.

A friend of ours, some years dead, was born to a Jewish family in Berlin, and got to the US in 1936. The one picture of her German days that I remember showed her in a chair, holding a lion cub. She was a very pretty girl of about 10 or 12 when the picture was taken. If the bad times had arrived, they do not show in her face. I suppose that the picture could have been taken in 1933, and her cub could have been one of those in the picture with the Fests, and so for that matter her chair.

Was it a custom of the prosperous classes in Berlin to have such pictures taken? No American zoo of the last half century would want to risk the liability, I should think.
Posted by George at 5:44 PM No comments:

Happening the other day to open a book to Burke's Speech on Conciliation with America, I noticed the sentences


I do not say whether they were right or wrong in applying your general arguments to their own case. It is not easy, indeed, to make a monopoly of theorems and corollaries.

And farther down he answers Samuel Johnson's


how is it that we hear the loudest YELPS for liberty among the drivers of negroes?

in detail, if without at all blunting its point:


There is, however, a circumstance attending these Colonies which, in my opinion, fully counterbalances this difference, and makes the spirit of liberty still more high and haughty than in those to the northward. It is that in Virginia and the Carolinas they have a vast multitude of slaves. Where this is the case in any part of the world, those who are free are by far the most proud and jealous of their freedom. Freedom is to them not only an enjoyment, but a kind of rank and privilege. Not seeing there, that freedom, as in countries where it is a common blessing and as broad and general as the air, may be united with much abject toil, with great misery, with all the exterior of servitude; liberty looks, amongst them, like something that is more noble and liberal. I do not mean, Sir, to commend the superior morality of this sentiment, which has at least as much pride as virtue in it; but I cannot alter the nature of man. The fact is so; and these people of the Southern Colonies are much more strongly, and with an higher and more stubborn spirit, attached to liberty than those to the northward. Such were all the ancient commonwealths; such were our Gothic ancestors; such in our days were the Poles; and such will be all masters of slaves, who are not slaves themselves. In such a people the haughtiness of domination combines with the spirit of freedom, fortifies it, and renders it invincible.

Footnotes, Or, Oh, That Hegel

I have been reading, with much interest, Not I by Joachim Fest. I have been distracted here and there by the footnotes. These can be very helpful, as when they identify German poets and writers little known to most of us in the English-speaking world. They can also be a bit odd, something I noticed with a footnote on page 102, which explains a board game of naval strategy, the text  being


later we replayed historic sea battles from Salamis to Trafalgar and Jutland.


These are major historical maritime battles from the Greeks via the Napoleonic Wars to the First World War; to Germans it is the Battle of Skagerrak, not Jutland.

Now, given that Fest's memoir is largely about his life under the Third Reich, and about his decision to become a historian, it is fair to assume that most who buy the book will have some interest in history. Those who have enough interest in history to spend $17 and tax on the book seem likely to me to have heard of Salamis and Trafalgar, if not Jutland. Is the footnote in effect an apology for the translator rendering "Skagerrak" as "Jutland"? I'm not likely to find out.

On page 387, discussing the collapse of the Weimar Republic, Fest writes


Consequently, broad but fickle sections of the population, who were essentially well disposed  to the republic, believed themselves to be threatened by radicals of the right and left; they increasingly surrendered to the idea that nothing less than the spirit of the age was against them. With Hegel in one's intellectual baggage one was even more susceptible to such thinking.

And the footnote explains


Fest here refers not to the Hegel whose reception, especially via France, has dominated so much of postmodern Western thought. He writes of the founder and main representative of German Idealism as he was popularly dispensed in German secondary schools and universities well into the 1960s. One of the seminal modern thinkers, Georg Wilhelm Friedrich Hegel (1700-1831) has profoundly changed speculation in most fields of philosophy from logic to ontology and from philosophy of history to aesthetics.

I cannot imagine who can both understand this footnote and require it.

Posted by George at 3:22 PM No comments:

Not News to Many, But Good News to Me

This morning I happened to be passing by Kramerbooks just above Dupont Circle, when I noticed that the sign gave the ours as 7:30 am through 1:30 am. The closing did not surprise me; the opening surprised and delighted me. I had to go in and buy a book. (Not I, by Joachim Fest). This is yet another reason to walk to work, and take the long way.
Posted by George at 6:46 PM 2 comments:

Seen today on the 1700 block of Columbia Road, NW: 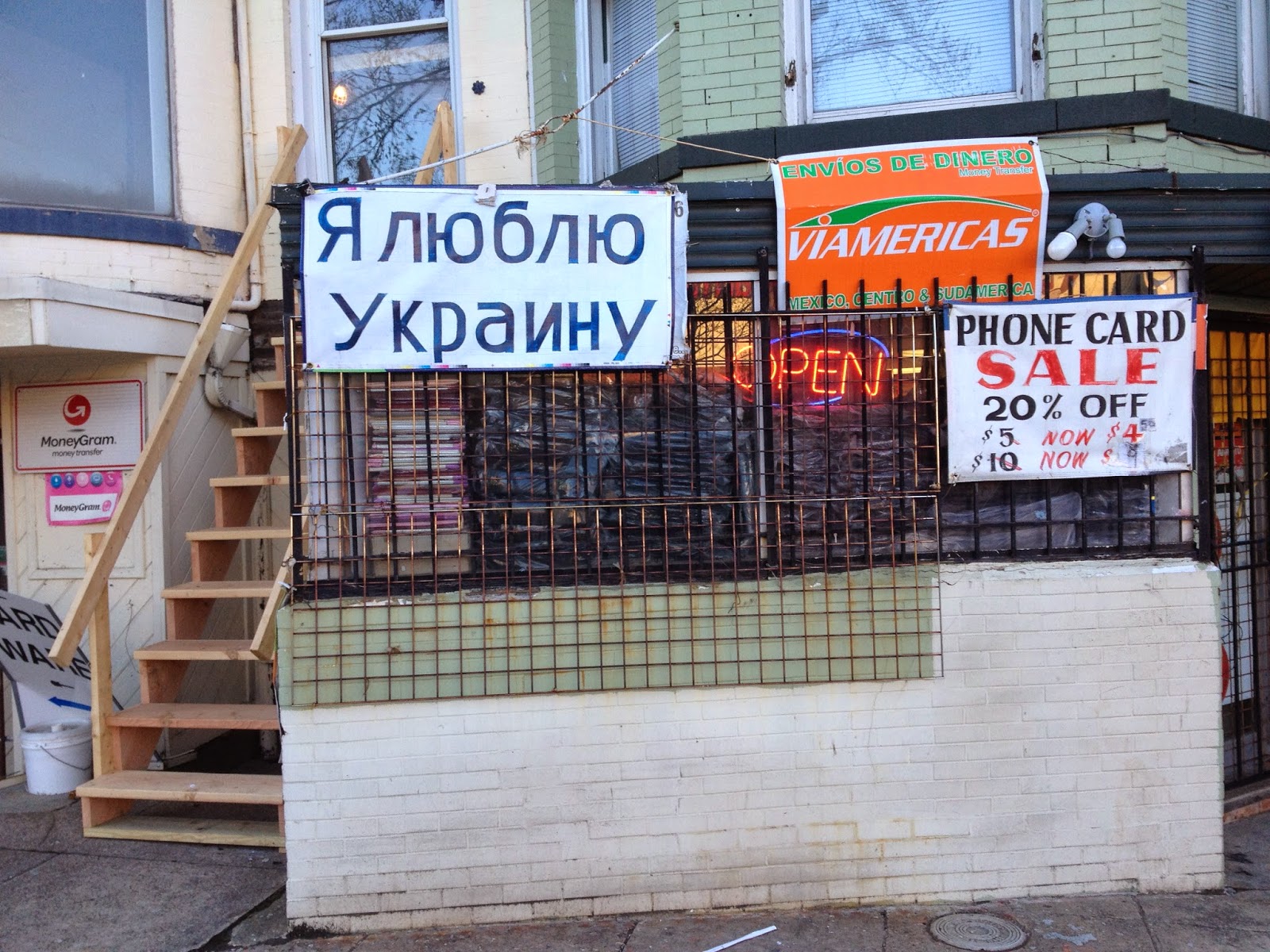 The orange sign is headed "ENVIOS DE DINERO"--words more commonly seen on the signs along this commercial stretch.
Posted by George at 5:59 PM No comments:

One day this week, I got onto the bus downtown, and managed to get my preferred seat, the left-side one in back that faces across the aisle. I was slightly aware of a woman sitting in the right corner of the seat across the back, mostly because she was talking on her cell phone. Generally I did not notice, but along about T St. I heard that she was explaining to her interlocutor the difference between introverts and extroverts.

Perhaps we should add the category "Metrovert", one who carries on private conversations in a carrying voice on public transportation.

Posted by George at 4:44 PM No comments:

Jay Mathews writes this week in The Washington Post, that many of the country's best high schools, as measured by his "challenge index", have no football teams. He offered a list of fifty local schools, nine of which had no football team. I found the list of schools without football less than persuasive, for it had

The criterion of the challenge index produces a list of the top 50 local schools not including Thomas Jefferson High School in Fairfax County. This diminishes my opinion of TJ not at all, and does not improve my opinion of the index. And I find it curious that Gonzaga manages to place about mid-way down, but Georgetown Prep, the other local Jesuit high school, does not appear.

On reading the whole article I had to wonder: if a writer as persuasive as Jay Mathews were to identify a correlation between posture and college admission, would the hallways of our high schools look like West Point?
Posted by George at 5:32 PM No comments:

Because You Can Never Have Enough

Recently I noticed a statue I hadn't seen before on Massachusetts Avenue NW at Sheridan Circle. I found that it was of Mustafa Kemal Ataturk 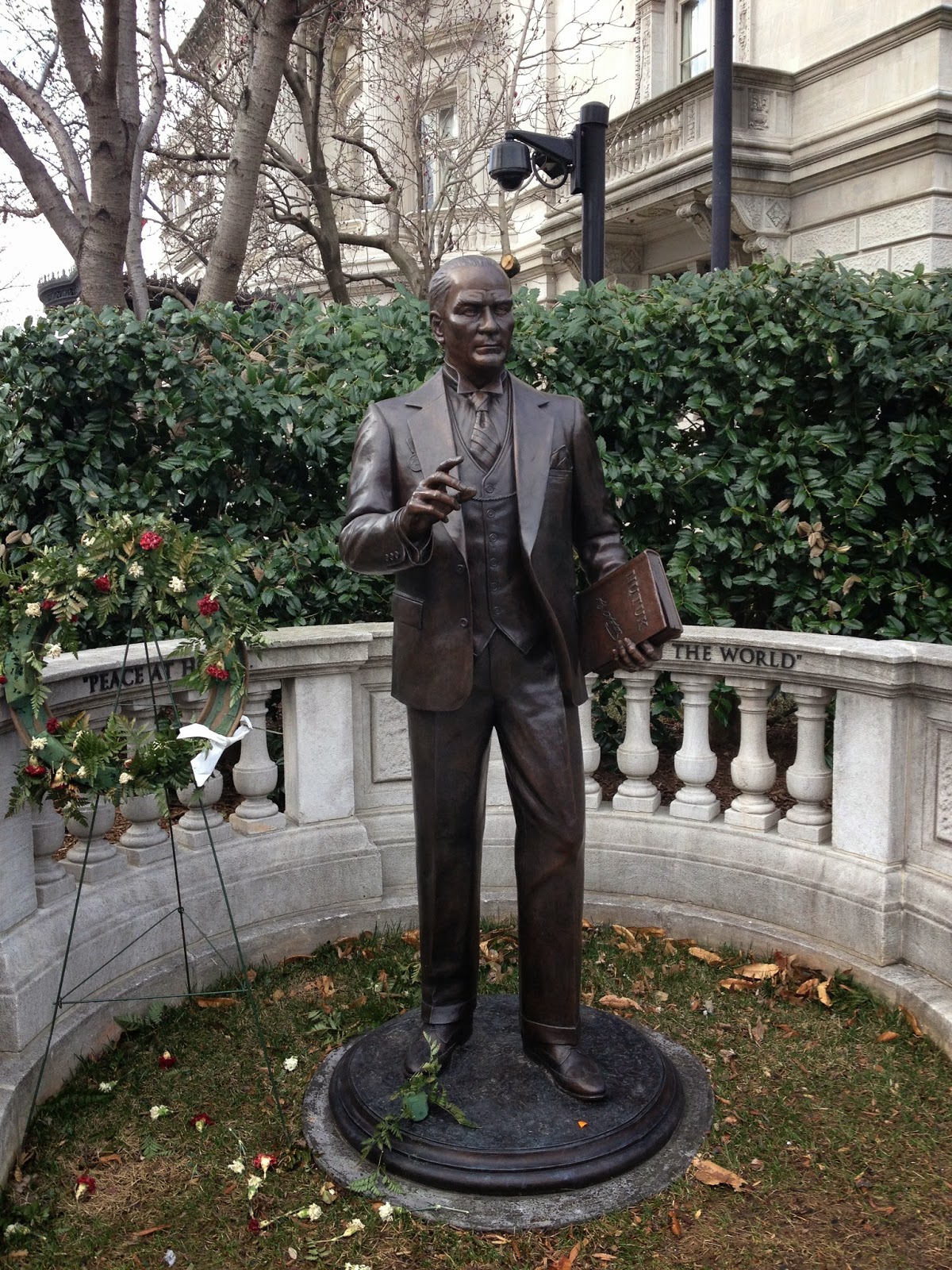 A plaque beside it says that the statue was paid for by private funds. It stands in front of the building that used to house the Turkish embassy.

The new Turkish Embassy is a couple of blocks away and on the other side of Massachusetts Avenue. It, too, has a statue of Ataturk-- 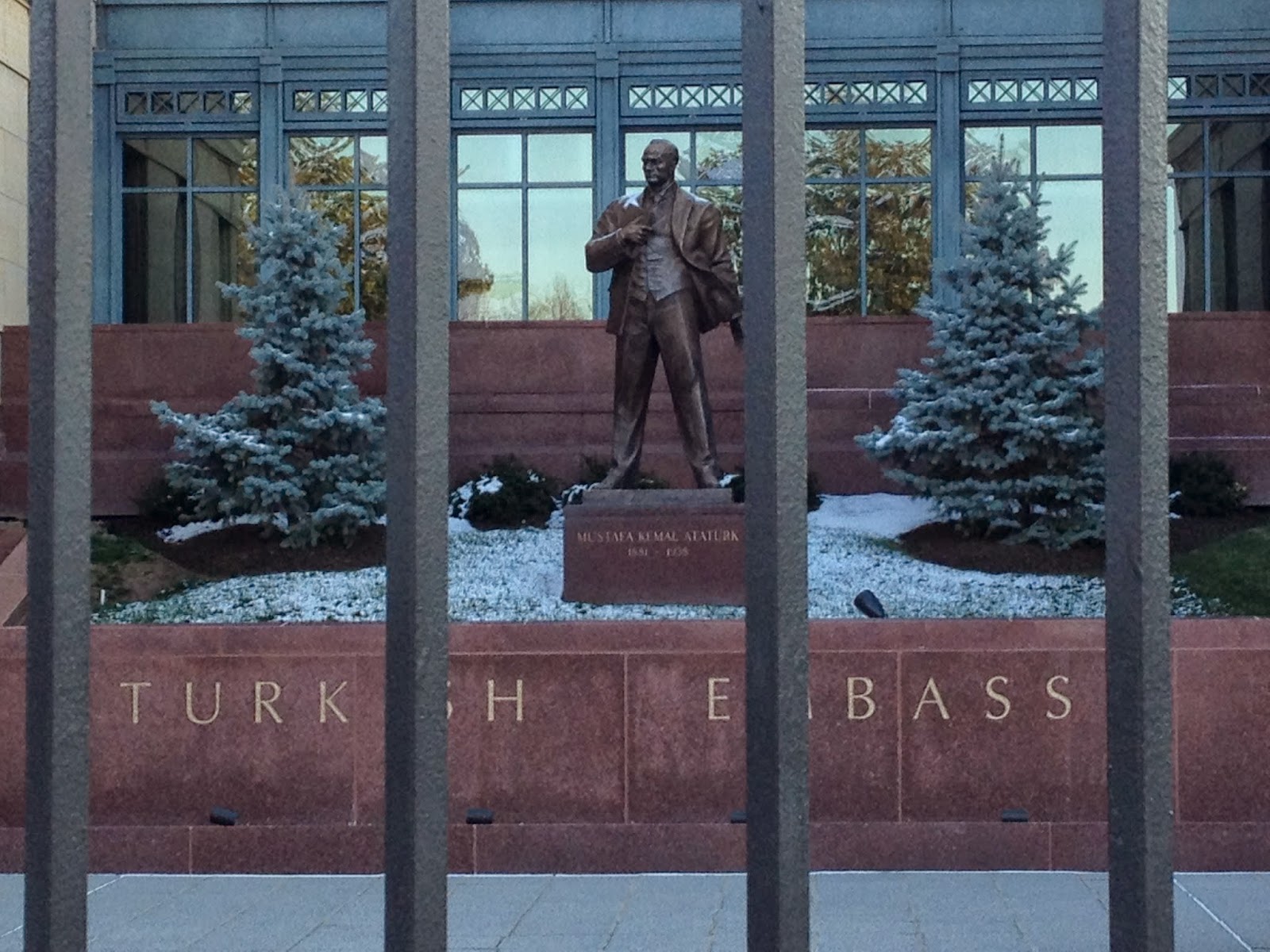 I assume that the Turkish state paid for this one.

Excluding religious figures, I can think of only two other men represented by two or more outdoor statues in Washington. There are two statues of Abraham Lincoln: the immense seated figure at the Lincoln Memorial and a life-sized standing statue near the courts. There are four outdoor statues of George Washington: equestrian at Washington Circle and National Cathedral, standing in front of the Society of the Cincinnati and in George Washington University's University Yard. (There is also a large bust of Washington behind the Masonic Temple at 16th and S Streets NW.)