In On The Fourfold Root of Sufficient Reason, after rejecting Aristotle's view that all thinking requires a "mental image", Schopenhauer goes on to say that


Only this much can be maintained: that any true and original knowledge, even any genuine philosopheme, at its innermost core, or at its root, must have some kind of intuitive apprehension. .... If the explanation has such a core, it is like a banknote payable in cash; in contrast, any other explanation arising out of a mere combination of concepts is like a banknote which is itself again secured only by the backing of other promissory notes.


Any general statement is like a cheque drawn on a bank. Its value depends on what is there to meet it. If Mr. Rockefeller draws a cheque for a million dollars it is good. If I draw one for a million it is a joke, a hoax, it has no value. If it is taken seriously, the writing of it becomes a criminal act.

Did Ezra Pound read Schopenhauer? Schopenhauer gets no entry in the index to Hugh Kenner's The Pound Era. And I believe that in Guide to Kulchur Pound names Leibniz as the last real philosopher, though I haven't a copy handy to check..

(The OED defines"philosopheme" as "A philosophic conclusion or demonstration ; a philosophic statement, theorem, or axiom".)
Posted by George at 3:05 PM No comments:

Do and Will: In J.L. Austin's How to Do Things with Words, the very first example of a "performative", i.e. a sentence that does not describe an act but itself acts is


'I do (sc. take this woman to be my lawful wedded wife)'--as uttered in the course of the marriage ceremony.

At the bottom of the page is the note


[Austin realized that the expression 'I do' is not used in the marriage ceremony too late to correct his mistake. We have let it remain in the text as it is philosophically unimportant that it is a mistake...]

Indeed, in The Book of Common Prayer (printed 1945) and a Tridentine Missal (copyright 1953), the operative words are "I will."  In the current Roman Missal, "I do" is permissible in one form of The Consent, though that form is prefaced with


If, however, it seems preferable for pastoral reasons, the Priest may obtain the consent of the contracting parties through questioning.

I don't blame Austin for the mistake, for though I have been to quite a few weddings, I did not remember the form.

Hereby: Early in James Jones's novel The Thin Red Line, a private counted as unsatisfactory in peacetime service has distinguished himself in the company's first engagement. The company commander, in need of such enlisted leadership, promotes him to acting sergeant. The private is not sure about the form of this and asks


Don't you have to say hereby? You know, to make it official.

The reader is likely to sympathize with the company commander, a reservist faced with Japanese machine gun nests in front and with an impatient batallion commander, of course a West Pointer, to the rear. Yet in Austin one finds (Lecture V) that


'Hereby' is a useful criterion that the utterance is performative.

Acting Sergeant Dale's instincts were not entirely wrong.
Posted by George at 2:02 PM No comments:

The Square Root of Three

Then recently a household member noticed in a design magazine the picture of a handsome round table. The top was supported on a structure that had rods rising up from an equilateral triangle, the latter supported by feet at the angles. The table was out of our price range; the question was whether we could get something like it built. Perhaps so, but it might be useful to reckon the specifications.

The next question was the size of the triangle at the bottom. An equilateral triangle with sides of length n will have its angles resting on the midpoints of the sides of an equilateral triangle with sides of length 2n. However, the picture shows the rods leaning out: the triangle twice the size of the top triangle is therefore larger than the actual supporting triangle. Well and good: how do we calculate the difference in length of sides, supposing that the sides of the larger triangle are at distance m from the sides of the smaller triangle?

I arrived at the answer by drawing a couple of right triangles with a side of length m opposite a sixty degree angle. The calculations necessarily involved the sine of sixty degrees, which is the square root of three, divided by two. The number I came up with was 6m divided by the square root of three, or roughly 3.46m. I will leave the derivation as an exercise for the reader, unless somebody asks me to show my work.

I found myself thinking of a paragraph from Kipling's story "The Impressionists":


“There's great virtue in that 'we,'” said little Hartopp. “You know I take them for trig. McTurk may have some conception of the meaning of it; but Beetle is as the brutes that perish about sines and cosines. He copies serenely from Stalky, who positively rejoices in mathematics.”

I don't know that I ever positively rejoiced in mathematics, but I can say that I wasn't as the brute beasts that perish even about trigonometric functions. I can also say that nothing I have read since my last math class, about 45 years ago,  has made me think as much about sines and cosines as the picture in a design magazine has.
Posted by George at 10:06 AM No comments:

In The Reader Over Your Shoulder, Graves and Hodges interpret


"You will find bee-orchids almost anywhere in Devon."


--meaning perhaps in a few fields in several parishes in the Torbay district of South Devon.

(Chapter 5, "The Principles of Clear Statement", Principle Four, "There should never be any doubt left as to where something happened or is expected to happen.")

I think of this, now and then, on reading assertions about what everyone does or knows, or about what the culture consists of.
Posted by George at 4:51 PM No comments:

I cannot think of many cases in which a mother and a son have acquired some fame by writing, and in most of those, I don't know what either thought of the other's efforts. What did Rebecca West think of Anthony West's books, or he of hers? Anthony Trollope thought that his mother's most famous work, The Domestic Manners of the Americans, was unduly harsh, and he had reservations about her fiction, but he expressed his gratitude and admiration for the way in which she kept a family going with her writing:


I do not think that the writing of a novel is the most difficult task which a man may be called upon to do; but it is a task that may be supposed to demand a spirit fairly at ease. The work of doing it with a troubled spirit killed Sir Walter Scott. My mother went through it unscathed in strength, though she performed all the work of day-nurse and night-nurse to a sick household;--for there were soon three of them dying.

Frances Trollope lived long enough to see a number of her Anthony Trollope's books published. I don't know that there is a record of what she thought about them, though he writes of the days before he had published that


I knew that she did not give me credit for the sort of cleverness necessary for such work.

All this came to mind when I looked into the introduction of  On the Fourfold Root of the Principle of Sufficient Reason and Other Writings, where I found


[The dean of the philosophy faculty of the University of Jena] quickly circulated a letter announcing the dissertation while mentioning that its author was the son of 'the well-known authoress, Frau Hofrätin Schopenhauer.'...

Unfortunately, the published dissertation earned, at best, lukewarm reviews. Indeed, the most stinging might have come from the young man's mother, who asked sarcastically whether his book was for pharmacists. Schopenhauer retorted that his work would still find readers when not even a single copy of her writings could be found in a junk yard. Undaunted, Johanna Schopenhauer spat back, 'Of yours, the entire printing will still be available.'

I had not known that Johanna Schopenhauer was a writer--had not for that matter known her name. The Gutenberg project offers a book of travels that she wrote.

In The World as Will and Representation, Schopenhauer asserts that intellect is inherited from the mother, character from the father. He certainly thought well of his own intellect, and must have been compelled to rate his mother's high. What made her think of  pharmacists? Did the the word "root" suggest it?
Posted by George at 6:01 AM 2 comments:

Last month, while walking across Paddington Street, we noticed a plaque: 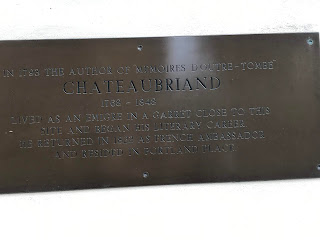 (In 1793 the author of "Memoires d'Outre-Tombe"/Chateaubriand/1768-1849/Lived as an emigre in a garret close to this site and began his literary career. He returned in 1822 as French Ambassador and resided in Portland Place.)

Chateaubriand writes of his residence there in Book X, Chapter VI of his memoirs:


My friends found me a room better suited to my sinking fortunes (one is not always at the peak of prosperity); they placed my in the neighborhood of Marylebone Street, in a garret with a window looking out on a cemetery; every night the watchman's rattle told me that someone had just stolen bodies.

The editors note that Paddington Street's Garden, opposite the plaque, served as the cemetery of St. George's Church from 1731 through 1857. I suspect that the resurrection men were not nearly as active there as Chateaubriand suggests.

Posted by George at 6:15 AM No comments: