About forty years ago, while walking downhill from the Washington Monument, I noticed a small marker: 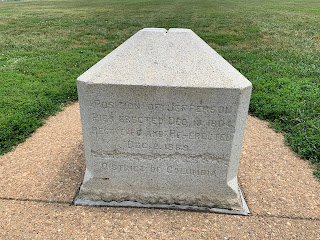 No other sense of "pier" coming to mind, I supposed that the Jefferson Pier must have been a landing on the Potomac. I knew that good deal of the land south and west of the monument was fill.
Since then, I had looked for it once or twice, not hard, always without finding it. On the Saturday before July 4, I was walking with visitors toward the monument and spotted the marker. While we were looking at it, a fellow with earphones in straightened up from his inspection and told us that this marked the first proposed site of the Washington Monument, as being due west of the Capitol and due south of the White House: his audio guide had told him as much. We thanked him, and I stood corrected.
The WPA guide, Washington: City and Capital does not include "Jefferson Pier" in its index. It does say that L'Enfant had it in mind to have an equestrian monument to Washington at the point where this marker now is, and that any movements to erect a monument to Washington were stalled by Washington's discouragement as long as he lived. Once Congress determined to build the monument, it was found that the footing was better a bit to the east, where the monument now stands.
Wikipedia has a clear account of the Jefferson Pier. According to that, the marker originally stood on the south side of Tiber Creek (long since buried), and was used as a mooring post for barges. But it was not on the Potomac. The pier is located as close as it can be to where it first was, but some feet higher, for the ground has been built up.
Posted by George at 3:41 PM No comments:

Some years ago, a young relative moved to Los Angeles. He rented a unit, one of four, on a side street in a quiet neighborhood. Of the other units, one was rented by an aging foreign rocker, one by a young woman who acted in a serial drama of some sort--TV or streaming, I no longer remember--and the last I think by a retired couple. I mentioned this to a college friend long resident in that area, who said, Real Day of the Locust stuff.

I knew of Nathaniel West's novel The Day of the Locust, but had never read it. Recently I found a copy, a New Directions paperback containing also Miss Lonelyhearts, and did read it. I suppose I see what she meant, for among the residents in a rooming house, principals in the story, are a failed vaudevillian, his daughter, who is a not very successful actress, and a scenery designer.

Long ago, I read W.H. Auden's The Dyer's Hand, a collection of essays including "West's Disease", on the novels of Nathaniel West. On rereading the essay, Auden seems to me largely correct. I would say that the disease, or syndrome, of an inability to turn wishes into desires, does not seem to be something West discovered or exploited beyond his predecessors. Frederic Moreau in Flaubert's Sentimental Education seems to suffer from just such an inability to want and pursue something wholeheartedly.

A minor character in The Day of the Locust asks, "What about the barber in Purdue?" According to West's brother-in-law, S.J. Perelman, Groucho Marx would ask, "What'll it mean to the barber in Peru?". Both had Indiana in mind, but Peru is a town, and Purdue a university. Both meant to suggest that one should avoid undue sophistication, but the fictional Claude Estee proposed to offer the barber "amour", and Groucho Marx I think must have had slapstick in mind.

Posted by George at 2:42 PM No comments:

Contractors have been working on the lower terrace of Meridian Park, just above Florida Avenue NW. Last week one could be delayed by a front-end loader dropping debris into a dump truck along 16th. The front end loader reached only so high, and the plywood ramp it drove up was limited in height by the need to allow pedestrians to cross. It usually took the operator of the front-end loader two or three tries to shake everything out of the shovel and into the truck. This part of the work seems to be done.

For many years, the only commercial establishment on 16th St. NW north of Scott Circle was The New Hampshire Mart on the northwest corner of 16th and T. For some months now, probably for more than year, the property has been surrounded by a chain link fence, and the building undergoing some sort of reconstruction, though I never see anyone working on it in the morning. The store should have been profitable, for it sold wine and beer. Perhaps the price of real estate meant that the property was worth more than operating the store would have been.

To the east, the 1500 block of T was blocked off by equipment, and had been dug up. Now it is open to traffic, though the pavement is roughly patched the  Friends who live on the block say that this has been going on for quite a while.  It appears that the city is replacing water pipes there. The pipes replaced could be about 125 years old.

On the terrace of the Masonic Temple at 16th and S, there are yoga classes, or anyway sessions, on Monday and Tuesday morning. This is new since the pandemic: I have walked along this block for many years, and never seen anyone practicing yoga there. I suppose that a lot of persons within a few blocks found themselves working at home, ergo with more time. The usual complement seems to be a dozen or thirteen working out, plus the man who leads it.

A day camp is in session at the Jewish Community Center (JCC) at 16th and Q. Campers and counselors wait on the steps for a bus to take them to the JCC in Rockville, which has much more space. I think that a new session must have started, for yesterday I heard an older counselor introducing a camper to the bus counselor, saying that he could answer any questions she had while on the bus. The counselor looked to be fourteen or fifteen.

Posted by George at 5:00 PM No comments:

This evening, I was waiting for the S2 bus at the corner of 16th and L. A Kawasaki Mule 4x4, a vehicle about the size of a golf cart, pulled up to the curb. A man got out holding a liter bottle. I expected him to place it in a trash can, but he began to empty the water from it onto a sign on the sidewalk. This sign had a red background with blue lettering; it urged social distancing, and had been placed by the downtown business improvement district. The man emptied the bottle in a way to soak the sign evenly. He then stooped down and took the sign up in three pieces. Apparently the business improvement district has decided that social distancing is unnecessary outdoors. The woman who had been driving took cell phone pictures before he took the signs and after. He put the pieces in the back of the vehicle, and they drove off, I suppose to another sign. I wish I had taken pictures, too.

Posted by George at 5:54 PM No comments:

The New York Times reports on a minor stir in the Southern Baptist world, where one prominent minister seems to have repeated another's sermon. Those who are interested can no doubt find the sermons on YouTube and commentary on-line.

Coming from a more structured liturgical tradition (at least I think so--I know little of Southern Baptist services), I find the fuss surprising. Others might as well. When at the crisis of  Wodehouse's "The Great Sermon Handicap" the Rev. James Bates delivered the Rev. Francis Heppenstall's noted sermon on Brotherly Love, including "the rather exhaustive excursions into the family life of the early Assyrians",  the Rev. Mr. Heppenstall being out of action owing to hay fever, Bingo Little suffered, or a least registered, "grief, rage, despair and resentment":

Bertie Wooster, though also out of pocket, spoke up for common practice:

"Well, my dear old thing," I said, "be fair. It's quite within the rules. Clergymen do it all the time. They aren't expected always to make up the sermons they preach."

(Second Story Books had the Germanic volume of The Great Sermon Handicap: pretty much every form of the Germanic languages newer than Anglo-Saxon, but excluding the Scandinavian languages, which have their own volume.  I guess that it as well the the Romance languages volume wasn't there to be bought.)

I don't know what the expectations are among the Roman Catholic clergy, though I do know that any priest who approached the Rev. Mr. Heppenstall's forty-five minutes would be pushing the limits of his congregation's patience.

Posted by George at 2:10 PM No comments:

By the middle of May, there were cicada shells thick on many lawns in the neighborhood. I saw a little boy a block from here collecting the shells as his mother watched. I saw one fly by that weekend, and my wife saw one walk across the garage stoop. During the third week of May we saw few flying, but many squished on the pavement. The neighborhood dogs had mixed reactions. One I know of--with suspect tastes to begin with--ate every cicada he could reach. Others would sample them, others still regarded cicadas as something to look at but not to eat.

When we first started to hear them, they sounded like the sort of mechanical noise one hears through a large building's air-conditioning system, suggesting something poorly lubricated in the machinery. At their peak, about the beginning of June, the cicadas made a noise like sirens half a mile away. The volume of the noise seemed to be correlated with the heat. It took a while for them to be heard in Rock Creek Park, which is usually a few degrees cooler than the surrounding areas.

A couple of Saturdays ago, a young man came down the street with a plastic bag, harvesting what cicadas he could find. I thought it odd that someone who planned to eat cicadas should be wearing latex gloves to grasp them. But I referred him to the locust trees a couple of blocks away, where my wife had said that the cicadas were thick.

Then there was a heavy rain, and after that one did not see or hear the cicadas as much.

They are not handsome or agile insects. They are slow in flight, slow afoot, and they are top-heavy--a cicada on its back is unable to right itself. But every seventeen years they make quite a show.

The birds appreciate them. A neighbor whom I saw picking serviceberries said that most years he has to race to get them before the birds, but that this year the birds were indifferent to them, apparently preferring protein to sugar. And the cicada killing wasps of course appreciated them. One of these wasps dug its hole in our front flower bed, removing a good deal of spoil: 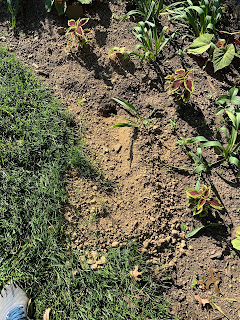 Posted by George at 3:20 PM No comments: