I knew that Daniel O'Connell died in Genoa, but I had not thought of him, or of looking for a marker. Then, down by the old harbor, we noticed this 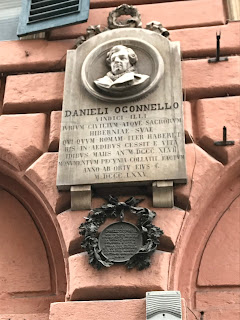 In Case of Emergency

Noticed yesterday along Genoa's Via Garibaldi: 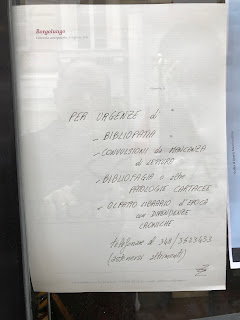 On Sunday afternoon, we arrived in Genoa. After unpacking, we followed the suggestion of taking a bus to the Corso Italia, and walking to Bocadessa. The wide sidewalk was filled with locals coming and going. Once at Bocadessa, we settled down at a cafe table for drinks, at the edge of a narrow cove. The terrace there was about four feet above a tongue of rocks running down to the sea. Children aged about five to nine, mostly girls, would run to within a few feet of the water and throw stones into it. The throws showed that baseball has made little impression on Italy.

Presently we noticed two young women in elaborate pink dresses, filmy over the shoulders, sleeveless, very full skirts, carrying each a bouquet of pink flowers, accompanied by two photographers and what was probably a brother. All three of us had the same thought, "quinceañera". We had never heard of such a custom in Italy, but who was to say that the girls were Italian? The photographers went to work with the girls, first separately, each in turn standing on the beach or sitting in the angle of the wall. It was clear, as each walked carefully the ten yards of beach, that the girls were in high heels

My wife noticed that several of the little girls found this much more interesting than throwing rocks. They stood still, a little behind the photographer. Once the photographer was done with the first girl's standing pictures, they ran up, and a mother took a photograph with her phone.

As we were looking for a place to take a photo of our own, a photographer and one of the girls passed us, heading for another location, and we heard him say "quindici anni". So the girls were twins, quinceañeras. Where they were from, who knows. The brother could certainly pass for Latin American. I trust that they will have a good set of photographs to show their daughters and granddaughters.

We are staying in the Brera district of Milan, a short walk from the Pinacoteca di Brera, and the botanical garden next to it. In the latter are a couple of gingko trees 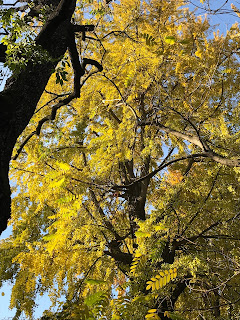 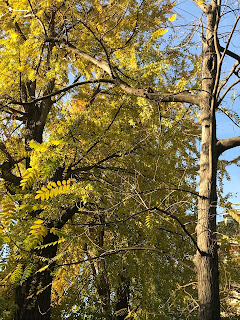 brought from China in 1775, the year after the garden's founding. The silhouette of a gingko leaf appears on the sign at the entrance to the garden.
Posted by George at 11:28 PM No comments:

Sometimes at this season, gingko trees will drop showers of golden leaves. I haven't had a chance to put my self on the sun side of one of these showers to take a picture. I tried today, but the leaves were coming down in tens rather than hundreds. Still, they make a good show, on the tree 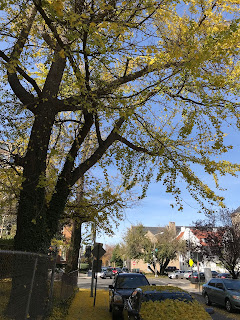 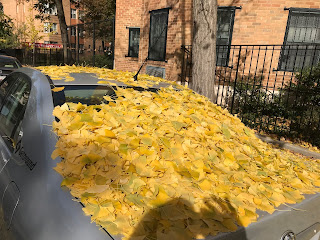 or on the ground 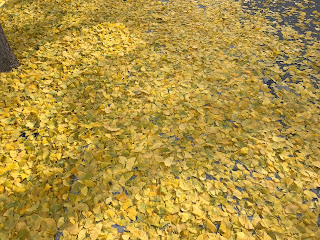 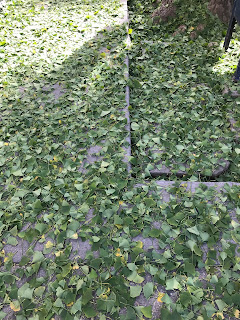 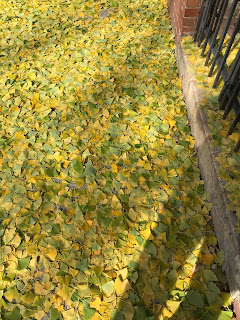 Mostly, though, the leaves are golden before they fall.

The neighborhood listserve has an invitation to help plant lurid sedge, a native plant, in wetland nearby. The description of the plant, from New Moon Nursery, reads


Carex lurida is a large tufted wetland sedge. The narrow leaves are a bright yellow green and about 1’ long. In late spring stiff triangular culms rise above the foliage to 3’ bearing chartreuse bottlebrush shaped spikes. Attractive warm brown seed spikes follow. This bold sedge flourishes in sun or part sun in damp or wet sites. Carex lurida and other wetland sedges host caterpillars of Eyed Brown Butterflies and several species of Skippers and moths. Many wetland birds feed on the seed. The Sedge Wren feeds and nests in sites dominated by wetland sedges.This sedge has numerous common names. It is sometimes called lurid sedge due to the shockingly unexpected yellow color of the foliage and seed spikes. Some references call it sallow sedge again due to its yellowish “complexion”. Others call it shallow sedge perhaps in error or perhaps due to its ability to grow in shallow water.

Now, this was not my understanding of "lurid", but Skeat's Concise Dictionary of English Etymology says

The OED gives "pale and dismal" the priority, with citations beginning in the 17th Century. For "Shining with a red glow or glare" , the first citation is from the end of the 18th Century, and the figurative sense in which I have always known it to be used has a first citation from 1850.

Last month I took our car to the dealership for "A Service", which amounts mostly to changing the oil. Mid-morning, the agent called and listed some additional work the agent suggested. I agreed to all, until she got to replacing the battery, which would have cost $200. That I thought exorbitant.

On Saturday morning, returning from another errand, I stopped at AutoZone. The battery prices suggested that my savings would be less than I thought. I left with a $140 battery. Still, ignoring the time standing in line, and the time spent changing the battery, I figured to clear $60. Replacing the battery did not take long.

However, this model of car has anti-theft logic for the sound system: wholly removing power will leave the readout with an "enter code" display. This requires that one enter a five-digit code with the presets. One has ten tries to get it right, after which one must take the car to a dealership. We could not find the code. We found one for the previous car, which I tried on the ground that it was in with some other material for the new car. Of course it did not work. With no better ideas left, we went running.

While running, both of us thought where the card might be. It was there, and I tried it. It also did not work. I went to the company website to confirm it: it was correct. Yet it did not work. I suspected a bug in the technology.

On Sunday morning, a bit of looking on the internet suggested that interference from the FM radio might prevent recognition of the code. The remedies suggested were to disconnect the antenna, or to enter the code in an underground parking garage. The antenna work did not sound like something I could do cleanly. We drove to Columbia Heights first, where the garage wasn't deep enough, but where my wife picked up a shower curtain. Then we drove to a lot in Friendship Heights, where we continued to the fourth level underground. There the code worked the first time.

From the $60 savings, I deduct $3.70 in parking garage costs. There was also the matter of a couple of hours spent looking for the card and driving to the garages. On the credit side, we got rid of a certain amount of useless paper from the glove compartment--old registrations and insurance cards, etc. Still, next time I think we'll have the dealership change the battery.
Posted by George at 2:26 AM 3 comments: