According to Amby Burfoot and George Hirsch, writing in The New York Times,


Nonrunners often imagine that people can cover 26.2 miles only because they have lean, muscled legs and a highly developed cardiovascular system. Nothing could be further from the truth. The runner’s most important organ, by far, is the brain — the source of our dreams, drive and determination. Almost a century ago, the great Finnish distance runner Paavo Nurmi said: “Mind is everything; muscle, mere pieces of rubber. All that I am, I am because of my mind.”

If so, my brain has taken a beating over the last 30 years. Once I could reasonably expect to run a couple of marathons every fall and perhaps one in the spring. These days, I turn out for a five-kilometer race in the spring, and run it at a pace slower than I ran any of those long-ago marathons.

Certainly, discipline and determination are required. But running those distances make physical limitations very clear. I was never going to run the sort of time that Burfoot ran--I could not long sustain training at about half the weekly distance elite runners did, for I would notice injuries beginning. Even in shorter races, there I was only so fast I was going to run. As recreational runners went, I was pretty fair, but there was an obvious and unbridgeable gap between the elite runners and the rest of us.

Nurmi's statement is fine, as regard those very few with comparable physical abilities--those, as they say, who have picked their parents carefully. For the rest of us, Damon Runyon may be the sounder guide:


The race is not always to the swift, nor the battle to the strong, but that's the way they're betting it.

Statues of the Poets

Generals and and statesmen must hold the plurality of the statues in Washington, the size and location of the statue not always being in proportion to the achievement, as with McLellan's statue at Connecticut Avenue and Columbia Road, or Buchanan's in Meridian Hill Park. Yet there are a few statues of other groups, clergy for example, and poets.

This summer I noticed on the George Washington University campus a statue of Pushkin, a gift, it turns out, of the city of Moscow: 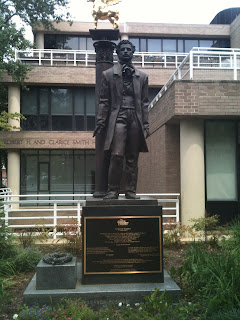 This arrived about 10 years ago. I had long known the statue of Taras Schevchenko about half a mile away: 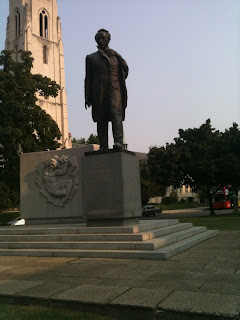 From what little I have heard of him, Schevchenko was not that good a poet. Yet his standing as a 19th-Century Ukrainian nationalist may have helped secure such a fine site in the early 1950; the monument speaks of the old Tsarist empire as the prison house of nationalities.

And of of course, in Meridian Hill Park, there is Dante: 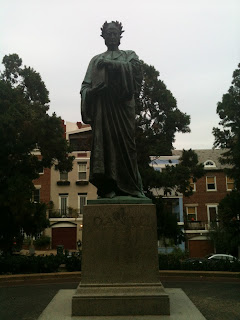 There is said to be a statue of Pablo Neruda at the Organization of American States, but I think that this must refer to one of the many busts around the building.

Posted by George at 5:38 AM No comments:

Over the weekend, we hosted the book club. As hosts, we chose the book, and it was my turn; I chose In Plato's Cave by Alvin Kernan. There were only two persons who definitely disliked the book, four who strongly liked it, and the rest at least found it interesting. Some, even of those who liked the book, disliked the author.

Need one like an author to enjoy a memoir? I would say No, or at least "not without qualification." It is probably about two centuries too late to take the Rousseau of The Confessions at his own valuation, or anything like it, yet simply as a document the book is worth reading, and it has plenty of laughs that the author may not have intended. One reads William Alexander Percy's Lanterns on the Levee with wonder at his ability to see the world as he wished to; nevertheless, it says something about a place and time that one can read and make allowances for. M.F.K. Fisher's Among Friends is wonderful reading, but there is something cold in it; extraneous to the book are all the biographies that have come out since, and which make it clear that she would have been a fascinating acquaintance but a bit dangerous to be closer to. I have my reservations about Albert Jay Nock as he reveals himself in Memoirs of a Superfluous Man, a book I enjoyed reading.

Posted by George at 6:00 PM No comments:

Last week, a man from another department looked at my desk and remarked that computer books never show computers on their covers. I looked at my desk: the most conspicuous book was Perfect Software by Gerald Weinberg, with a cover showing white cumulus clouds against a blue sky. Next to it was Effective Perl Programming, a cover showing oyster shells, one with a pearl. I turned over Beautiful Code: Vs of birds. Then I looked at the shelves. It was obvious that the many books by O'Reilly Associates would not contradict him, for most of those covers show animals. Modern Perl had what might have been a monitor, with the Perl sigils @, %, and $; but also, as he pointed out, a blue butterfly.

On a later inventory, I found three books with a computer or an aspect of one depicted:
And I'd have sworn that my copy of  Hennessy and Patterson's Computer Architecture showed a circuit diagram, but I'd have sworn wrong. That edition has a Corinthian capital on it.

It was surprising to have someone 30 years younger point out something quite obvious that I had just never thought about. Some publishers use a trade dress that has nothing to do with the subject:  O'Reilly Associates animals and Manning's clip art are examples of this.  Other publishers favor an austere cover with no art, as Prentice-Hall did for The C Programming Language. Some well-known texts have whimsical designs by which they are known: the dragon book, the Cinderella book, the wizard book.

There is also the problem of determining what a computer looks like. When I started to work with computers, they were generally the size of refrigerators, and one controlled them from a VDT with green or amber phosphors. If you walk into the server room today and see something the size of a PDP-11, or MV/7800, it is probably a disk array. Even personal computers and their peripherals have changed considerably in appearance over the years, and the hefty 17-inch monitor that was the envy of a department in 1995 is obsolescent now.

The software changes more slowly. My old "camel book"  omits a good deal that has happened in Perl since it was published, but is still a handy reference for standard functions and older modules. The older edition of C.J. Date's Introduction to Database Systems still does a good job of setting out the fundamentals of relational databases.  Publishers are better off, then, sticking with species that will be recognizable a few years down the road.

In re-reading Prolegomena to Any Future Metaphysics, for the first time more than thirty years, I noticed that I had forgotten just how unsatisfactory translations from German can be.  I should say that this translation is better than some such that I have seen, where the translator tries to follow the German syntax, turning what likely is difficult yet acceptable German into barbaric English. The English is not graceful, but perhaps could not be, and anyway grace is not the first quality I want in a translation of Kant. What made me uncomfortable was the regular suspicion that precision had been lost: for example, were certain concepts "mentioned" above, or were they enumerated? Does this "concept" translate the same German word as that "concept" does? This is not only a problem with translations from German: read  Aquinas's On Being and Essence, and amuse yourself guessing whether any given appearance of the word "being" renders "ens" or "esse".

One finds the same problem in other kinds of writing. I'm confident that I know of a few careless mistakes in translations I've read of histories, for example of Marc Bloch's Strange Defeat and of Jules Halevy's The End of the Notables. One counts on mistakes in translations of fiction, and never expects too much from translations of poetry. Yet in history, which proposes to narrate and interpret events, and in philosophy, which offers to explain pure thought, one would like to demand precision, or at least consistency, and to imagine it as possible.

Now and then I wish that the teachers at my schools had said, not "you're supposed to take a foreign language" or "we require five quarters of a foreign language, and recommend French," but something different. Perhaps "You will find that there are important books you must read, which were written in this language; there are better translations and worse translations, but really you will wish to be able to read the book in the original, if only to check the translation." But maybe they said something like that and I didn't listen.
Posted by George at 4:54 PM No comments:

Today's newspapers carried obituaries of Art Modell, who in 1961 purchased a controlling interest in the Cleveland Browns, and in 1995 moved them to Baltimore, where the franchise (for now) remains as the Baltimore Ravens. The move made Modell unpopular--hated--in northern Ohio. One read, now and then, of this, as for example that he could not attend the funeral of Lou Groza, the great Browns placekicker of the 1950s and 1960s.

It struck me when reading this that persons who abused Modell for moving the team misunderstood the relationship between a professional sports franchise and the city where it happens to play. Yet the misunderstanding did not arise the day he announced the move, or the day before that. It went way back, for some to before the days when Modell controlled the franchise. Art Modell profited considerably by that misunderstanding, both in Cleveland and Baltimore. Given the almost forty years of profit that he had from this misunderstanding, I thought it would have become him to bear the fewer years of unpopularity without complaining.

Posted by George at 4:36 PM No comments: