Recently while talking to neighbors I noticed a squash racket placed on the transom over their front door. I asked whether birds had been trying to nest there: Yes, and succeeded. I took a few steps east, and  could see the robin's nest nestled among the objects that they had placed there to keep the robins away.

We had a robin or robins trying to nest on our transom for a while this spring. We put up garden tools and scrap metal, we discarded the bits of nest that we found, and eventually we put bird spikes in place. Perhaps the bird spikes worked, perhaps the robins had simply found a better place to go, to the neighbor's house perhaps. I suspect they succeeded across the street because the family was out of town for a weekend. Considering the amount of nesting material that ended up on our porch, I don't think that a ledge so narrow is the best place to build a nest. Yet it is out of the weather and must be hard for predators to reach.

In the back yard, we have a metal arch next to the garage, over which we have trained a couple of rose bushes. Last fall, when the leaves had fallen, I notice a nest near the top of the arch. It struck me as a good spot, for I couldn't imagine a cat pressing through rose branches to get to it. This spring the nest was in use for a while--a robin in it cried out in indignation and flew off when I tried to take a picture of it. It seems to be disused now; a brood would have had time to grow up and fly off. In the meantime, the nest looks like this: 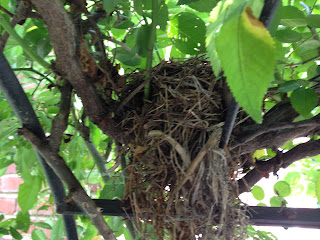 This week, I noticed in Mme. de Stael's De L'Allemagne, in her chapter on Schiller's plays Wallenstein and Mary Stuart,


Nothing is easier than to compose what people call brilliant verses: there are ready-made machines for that...

(She thought, by the way, that the French were given to this, and that Schiller was not.)

Not that long ago, I encountered in Wilfrid Sheed's Frank and Maisie: A Memoir with Parents the tutor,


a third gloomy genius dressed entirely in gray who cured me forever of fine writing with one offhand sentence. "This sort of thing is much easier to do than many people suppose."

In English, I suppose, the model for such advice comes from Samuel Johnson, quoted by Boswell on April 30, 1773:


I would say to Robertson what an old tutor of a college said to one of his pupils: "Read over your compositions, and where ever you meet with a passage which you think is particularly fine, strike it out."

On a recent Sunday afternoon I noticed a boy across the street, about four years old, helping to guide the weed whacker that his father operated. I should say that he had on eye protection and was well back from the spinning strings. It occurred to me that if I lacked enthusiasm for lawn care in my childhood, it might have been because the tools of the day made less noise and offered fewer dangers. But as far as I can remember, I regarded lawn care as something invented for the oppression of young boys, something that ate up time in weeding or mowing when I could have been doing something else. I don't think that it occurred to me much to relate the mowing to the possibility of playing football, kickball, whiffle ball or tag on that lawn.

For many years, I didn't do much, or any lawn care. Under the trees in Takoma Park, grass grows slowly and sparse. Every three weeks would have kept the lawn more or less decent, and sometimes I managed that. After that, we lived in an apartment and then in a townhouse development, where contractors cared for the lawns. When we first moved here, we used a mowing service until the proprietor ceased to answer phone calls.

This my fourth season of mowing. I expect that I could think up as many alternatives to mowing as I did in my childhood, but I don't much mind it. It is time outside, for one thing. For another, there is the satisfaction of seeing the lawn look better. I suppose that I am turning into the suburbanite who looks censoriously at uncut lawns.

I haven't played kickball in forty-five years, touch football in thirty. Yet I am concerned for the grass and worry a bit when my wife speaks of encroaching on it with new or enlarged flower beds. Grass is good ground cover all year, whether growing or dormant, and the dirt on which it grows won't wash away. Grass does not require mulching, so leaves raked off the grass do not bring mulch along with them. In this climate one need not water grass; it will become yellow in the high summer, but will become green again when the weather cools and the rains come back.
Posted by George at 2:58 PM No comments:

The newspapers reported this week that there has been a major breach of computer systems at the U.S. Office of Personnel Management. A relative forwarded on a link to one of the stories, and it struck me in thinking about it that perhaps Hamlet's father summarized the field of computer security as well as anyone:

But that I am forbid
To tell the secrets of my prison-house,
I could a tale unfold whose lightest word
Would harrow up thy soul, freeze thy young blood,
Make thy two eyes, like stars, start from their spheres,
Thy knotted and combined locks to part
And each particular hair to stand on end,
Like quills upon the fretful porpentine:
But this eternal blazon must not be
To ears of flesh and blood.

No doubt OPM made some mistakes. Yet I know what they were up against. One in couple of hundred users will click on the email from the lovely, lonely Russian girl looking for a friend. One in perhaps one hundred and fifty will click on the email with a link to log in and increase his email storage quota. Maybe one in one hundred will click on the browser pop-up that appears to be for upgrading Internet Explorer or the computer's anti-virus software. A few more will open an Acrobat file or Word Document coming from an official-looking but hostile source. And then the fun begins.

You can guard against this in some ways. You can install a web filter that blocks access to notoriously dangerous sites. You can make use of the  improved security in Windows 7 and later, requiring privilege escalation to install software or open certain files that have arrived by email. But if the users can't increase their privileges, they will complain. If they can, allowing privilege escalation will become so routine that it is automatic for them. Every such safeguard you introduce gets in the way of doing something that users want to do, at least some of which is in their job descriptions. If you make it sufficiently difficult, they will do what they want to do on their own computers, almost certainly using credentials for your systems.

You can classify action and object privileges very finely, and prove that malicious actions contrived by a particular attack will be limited in their effect. The National Security Agency (NSA) developed "SELinux", which does a good job of this, so good that I have spent days looking at logs and figuring out how to make certain programs work with it. You can, as NSA did, compartmentalize access to different pieces of data to make intrusion limited in effect and quickly detected. But then you may well hire sysadmins who share their credentials, because a trustworthy guy like Edward Snowden said that he needed them.

In Further Cuttings from Cruiskeen Lawn, Flann O'Brien, setting out the differences between the Dublin Man (disillusioned) and the Irish Man (not), says "Dublin Man rarely permits himself a laugh but the word 'idealist' will always get one." I don't laugh when I hear "computer security", but I might permit myself a pained smile that you can almost tell from a wince.
Posted by George at 5:54 PM No comments: