Back to the Blossoms

In a A Time To Be Born, set in New York about 1940, Dawn Powell mentions in passing the sudden importance of Washington, previously thought of only in connection with cherry blossoms and deadly state dinners. Nobody has ever invited me to a state dinner, but I do keep an eye out for the cherry blossoms.

Every year, some of us at my office try to walk around the Tidal Basin at least once while the cherry blossoms are at their best. This year, the peak was probably about Easter. I missed the days before, for I was out of town until Thursday, and the office was closed Friday. I did run down as far as Independence Avenue on Saturday, but to run around the Tidal Basin through the dense crowds would have been rude even if possible, and would have added a mile and some to a run at about the limit of what I can do these days.

Today a couple of us took the walk. Most of the blossoms were past their peak, most branches about half in blossom and half in leaf; a decent arborist could tell you which kinds of cherry they were.  But about a fifth of the trees were in full blossom, and all were beautiful. The crowds were thinner, so that we could walk without jostling, and with less care not to intrude on photographs.

We did dodge photographs, but five or ten rather than dozens. Of the photographs I saw in progress, two caught my attention: a young woman, sitting on the slope, tossing a handful of petals to be caught by the picture; another young woman, with a floral wreath on her head and a full purple skirt, who apparently was about to dance to some recorded music.

I took some pictures to prove that I was there, and here are two: 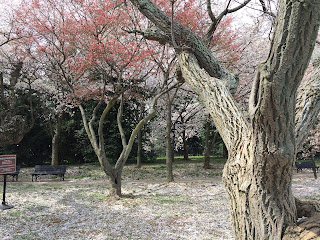 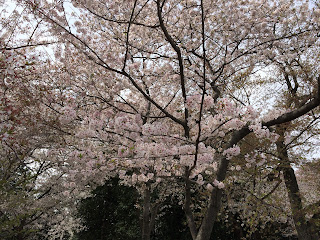 And on Friday, they were at about their peak in Mount Pleasant: 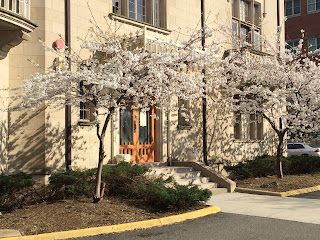 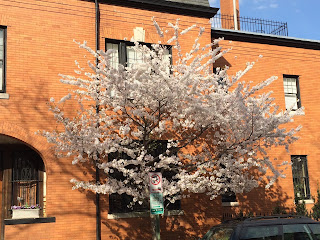 I believe that the blossoms appeared a couple of weeks earlier this year than last.
Posted by George at 4:37 PM 2 comments:

Last week we sat in a rooftop bar in Los Angeles, with a good view of the crowd. What struck me was the collection of clothing styles, in many cases with elements from years past. There was the man in a black hat, denim jacket, and printed tee shirt: it was a mid-1970s look, though maybe the jeans were a bit snug at the ankles. There were a couple of men in white tee shirts, straight-legged jeans, and sneakers: they could have come from a casting call for a movie set in the 1950s.  Several had a look that was from the 1980s. At least one woman had the shape of skirt, above the knees in front, below the calf in back, that I don't remember seeing before about ten years ago. Is this arbitrary mix of styles postmodern? I don't know.

It is more striking in Los Angeles, in that there one finds very old cars in decent condition, along with the very newest. There are 1970s GTOs in which the fellow with the hat would look at home. There is what we took to be a Studebaker station wagon to suit the men in white tee shirts. Along the block where we are staying are a Ford Falcon and a Dodge Sportsman van, both right around 50 years old.
Posted by George at 7:02 AM 2 comments:

Last spring, while in Los Angeles for a visit, we were reluctant to use our son's car, which had the check-engine light on. We asked the rental agency for a mid-sized car, the agency offered us a Jeep Cherokee, and we settled on a Prius. While backing up to turn around on a dark street, I backed into the bumper of a parked car, a sports ute of some sort, and discovered how far Toyota had gone in optimizing for a low weight: 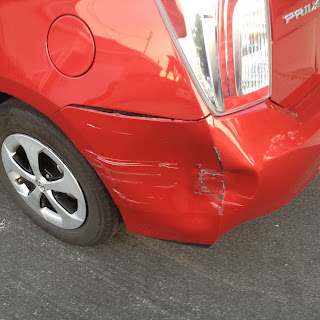 The sports ute was not scratched.

Before this visit, our son took his car to the dealership, so we did not expect any reason to rent a car. On Thursday, having picked up the car at his office, we pulled over to the curb about one door down from the place we are staying, and were about to move up, when a sports utility vehicle sideswiped us, at low speed but enough to do damage: 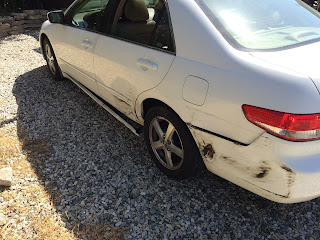 This sports ute was a Toyota, I suppose a Highlander [correction: 4Runner], and in its case Toyota did not optimize for weight. I did not see any damage to the car that struck ours, though admittedly I was distracted. Our son will drop his car at the body shop today, and rent something to drive until it is repaired.

Having started in the middle of them, I have just read the first of the five volumes of Jaroslav Pelikan's The Christian Tradition: A History of the Development of Christian Doctrine, namely The Emergence of the Catholic Tradition (100-600). For a week or two, I will be able to distinguish Marcionites from Donatists from Nestorians.

It is a work of astonishing erudition, "based on the study of the primary sources in the original languages--Greek, Syriac, and Latin", though he had "of course, consulted the sources in translation as well." The secondary sources he lists are in English, French, German, (modern) Greek, Russian, and Swedish. One, I noticed, was by the future pope Joseph Ratzinger, on "the noninstitutional aspects of Augustine's ecclesiology."

The erudition apart, Pelikan offers a readable account of his subject, the development of Christian doctrine, "what the church believes, teaches, and confesses." I imagine that he was correct in writing in the preface that "By using the index and by working his way through the narrative, even someone who knows no church history and no theology should be able to follow the plot and watch its movement."  My own knowledge of church history and theology was not wholly lacking, but measured against this book it was and is exiguous.

At some point, I will need to go back and reread this volume. That will wait on many things, and perhaps on the fourth and fifth volumes.
Posted by George at 4:33 PM No comments: