Grinding out Meaning from Alien Vocables

A post over at The Palace at 2:00 a.m. brings to mind a passage in Jaques Barzun's Teacher in America, in the essay "Tongues and Areas":


Every two or three years it falls to my lot to conduct the language examinations for Ph.D. candidates in European history. I am invariably shocked at the number of mature men and women who suppose that foreign prose is basically nonsense They must suppose this, or they would not put down English nonsense at its equivalent. Of course I know how they get into this defeatist frame of mind, but I groan at the thought that they have stewed in it since first-year high school. Once or twice these victims have had some claim on my time, which I discharged by putting them through a course of self-tuition in reading. We take a work of Ranke's and one of Michelet's, the dictionaries, and we start for an hour of intellectual misery grinding out meaning from alien vocables. The hour is only a sample. The student goes on at this pace until he or she can read at sight fluently. Fluency does not mean exactitude, sense of nuance, or even infallible recognition of unusual words: it means going on with the author at a reasonable rate. New words can be guessed, shades of meaning deduced from a second reading and exactitude checked with a new translation. Scholarly work will bring its own assistance later through repetition and criticism.
What is deplorable is that this should not be a well-known technique, and that the determination to squeeze sense from a text should be so rare, even among professional translators....

Here and there in Cultural Amnesia, Clive James advocates roughly the same procedure, though for German he mentions Golo Mann..
Posted by George at 4:06 PM 1 comment:

Some early readers of the Port-Royal Logic complained of its organization, some perhaps of its simple lack of dullness. The authors wrote in response that


But those who reason thus [complain of the organization of the logic], do not sufficiently consider that a book can scarcely have a greater defect, than that, of not being read, since it can only benefit those who read it ; and that thus everything which helps to make a book read, contributes also to its usefulness. Now, it is certain, that if we had followed their advice, and had made a logic altogether barren (with the ordinary examples, of an animal and a horse), we should only have added to the number of those of which the world is already full, and which are not read. Whereas, it is just that collection of different things which has given this work such a run, and caused it to be read with less distaste than is felt in reading others.

This seems fair enough. Leszek Kolakowski quotes part of this near the beginning of the second part of God Owes Us Nothing, his study of Pascal and the fortunes of Jansenism. Without the context, though, it reads oddly: "there is no greater flaw in a book than that it is not read".  I reflected on how many books have grave flaws that I discovered only by reading them, and wondered what the logicians could have meant.

Kolakowski says also that the logic is now "read only by a tiny bunch of of people specializing in the intellectual history of the seventeenth century." That I don't doubt. Yet is it much more forgotten than most of seventeenth century philosophy, the biggest names apart, and how well remembered are they? Certainly I'd find many persons who had read Spinoza's Ethics before I found one who had read the Port-Royal Logic; but how many would I have to stop on K St. NW before I found five who had read the Ethics?
Posted by George at 3:49 PM No comments:

Around fifteen years ago, the city planted quite a few trees along this block. Many are scarlet oaks, but some are eastern redbuds  (Cercis canadensis), and this is their time to flower: 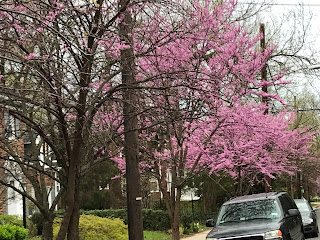 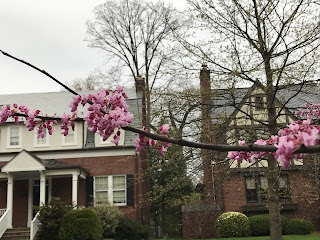 This winter the city, unless it was the National Park Service, planted two or three at the corner of 16th Street and Arkansas Avenue NW.
Posted by George at 1:25 PM 1 comment:

In early February, I took a picture of this tree on 16th Street NW 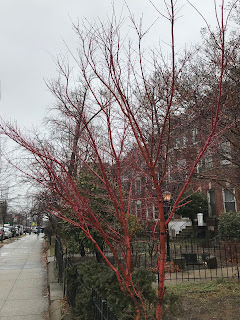 for the beads of water on it caught my eye. Today I noticed it again: 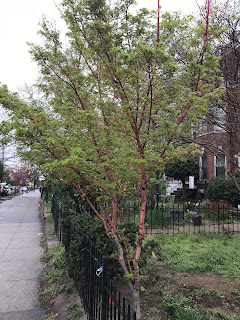 With a trip to California coming up, I thought it well to stop by Second Story Books to find something that would last for one cross-country flight or two, and could be left behind in Los Angeles if desired. I had in mind either On the Road, the scroll edition, or Happy All the Time by Laurie Colwin, the former because we were traveling, the latter because W.M. Spackman gave it a good review in one of the essays collected in The Decay of Criticism.  Happy All the Time was slimmer, had no preface, and cost $5 and tax, so I bought it.

After a few dozen pages of Happy All the Time, it struck me that of course Spackman enjoyed it: it was his own novel Heyday brought up to date, the well-born, well-educated, and well-heeled pairing up, but in the prosperous 1970s rather than the Depression, and with the women having attended the same colleges as the men. Still, I enjoyed Heyday, and I enjoyed Happy All the Time. I have objected to novels that seemed to be about what might have happened to people the author went to college with. On reflection, I see that what matters is what the author can do with the material, and Colwin was adept. The book might have lasted the flight had I not started reading it beforehand.

Idle Time Books had a copy of The Brass Ring, a memoir of youth and military service by Bill Mauldin. Those who have not heard of Bill Mauldin should try an internet search for him. The book is readable throughout, though Up Front and Willie & Joe: The WWII Years have more of the cartoons that made him famous. Most curious perhaps is a pair of  blurbs on the back cover:


A GREAT BOOK!
Mauldin's contribution to understanding of the war and how the G.I.s saw it is unique."
General James M. Gavin

Gavin seems to have represented the opinion among generals better than Patton. Mauldin tells of hearing at second hand of an endorsement from Theodore Roosevelt, Jr.,  and of passing on an autographed original to Mark Clark.

Over brunch in Pasadena on Sunday, friends suggested that we visit Descanso Gardens. We did, and were glad that we did.

In 1942, the founder of the gardens purchased about 100 thousand camellias from Japanese nurserymen facing internment, evidently at a  fair price. The gardens do have plenty of camellias, and many were in flower 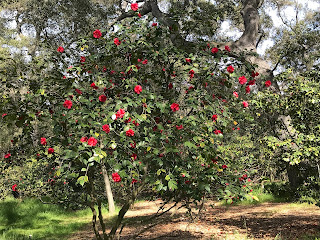 as were many other plants, some of whose names we knew, for example clivia 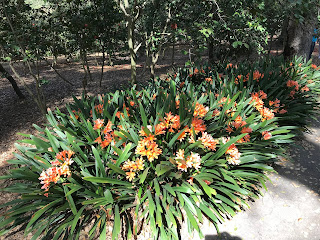 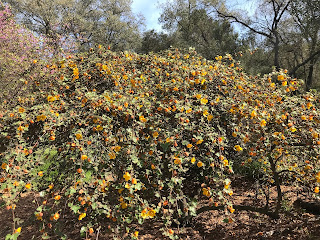 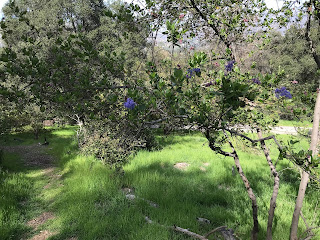 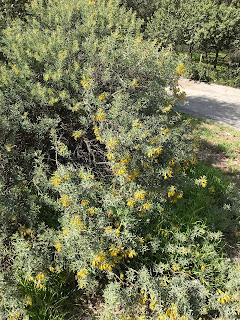 some new to me but identified by the signs 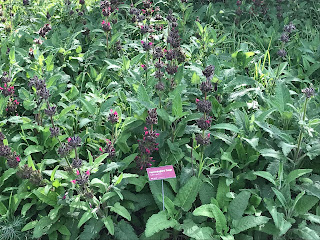 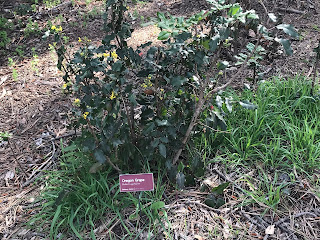 The gardens had many visitors, though they did not seem crowded. Some visitors were there for "TOMATOMANIA!", said to be the world's largest tomato seedling sale, and had seedlings in hand. Most just strolled through, taking pictures now and then.