Politics on a First-Name Basis

With municipal elections approaching, there are campaign signs out in yards and on poles along the street. For many offices, there is a preponderance of first names.

Of the candidates for mayor, Muriel Bowser uses only her first name on yard signs, both names on the signs fastened to light posts and utility poles. Carol Schwartz has some with both names, some with just Carol. When questioned about this back in the 1990s, she said that signs reading "SCHWARTZ" tended to bow around the pole and read as "WAR" to a head-on view. David Catania, an independent, and Bruce Majors, a Libertarian, use only their surnames. Faith Dane, who has run for mayor in every election of at least the last two decades, gives only her first name--the picture of a woman holding a bugle is to remind those who can be reminded that she had a big number in the musical Gypsy a half century and more ago.

Of the at-large candidates,  Calvin Gurley and Anita Bonds provide their surnames in larger type than their first names. Eugene Puryear and Thomas White print both names their names in equal sizes. Elissa Silverman has her first name in a larger, bolder, serif face, her surname in smaller, thinner sans-serif: the effect is something like an eye chart with a few rows missing. Khalid Pitts gives only his first name, and picture. I had to take off my glasses and peer at the tiny "paid for" line to discover his surname.

Among the candidates for attorney general, Lorie Masters prints her surname somewhat larger, and Karl Racine prints his much larger. Edward Smith could be considered to split the difference, for his signs read "SMITTY".

I suppose that the trend has been around since the days of Honest Abe, and I expect that "I like Ike" buttons are affordable in political memorabilia stores. Still, is informality a preferred quality among candidates?

If you have any responsibility for computers running Linux, the last couple of days have been busy. Yesterday afternoon, we all heard of an old but newly discovered vulnerability in the bash (Bourne-again shell) shell, which today is being called "Shellshock". The problem is that unpatched versions of bash accept without sufficient checking environment settings from the invoking program: environment settings can be designed to cause another program invocation.. This means, in the gravest case, that somebody with a web browser can cause your system to create an account for him, open the firewall, email passwords, etc.

If you have a Linux system or Mac at your disposal, you can test for this by entering

You should get an error message. If you get information about your operating system, it's time to update bash. If it takes more than five minutes to do so, it is probably because you are running an obsolete version of Linux.  Figure out now how you will upgrade. It is a very bad idea to let your Linux installation get too old.

Posted by George at 4:10 PM No comments:

On Friday, out for a walk at lunchtime, I noticed a cluster of persons up about 20th and M Streets, NW. The sign said something about "National Park(ing) Day". There was a hip-high stack of two by fours, maybe a foot each way horizontally, and apparently the challenge was to extract one without causing the whole stack to fall. I thought it odd, but forgot about in a block or so.

Then on K St., there was another sign, and some chairs and a table set up in a parking space. And a bit further east on K was "Perspective Park". This had a structure of tubes about three feet high, three feet wide, and four inches through the tubes, which looked had about the circumference of mailing tubes. Some were stopped or partially stopped with small objects. The passers by were invited to peer through it. I did not.

Back at the office, Google promptly located the web site. Park(ing) Day falls on the third Friday of September, a day on which

Seen today on I St. NW, next to the Department of Veterans Affairs: 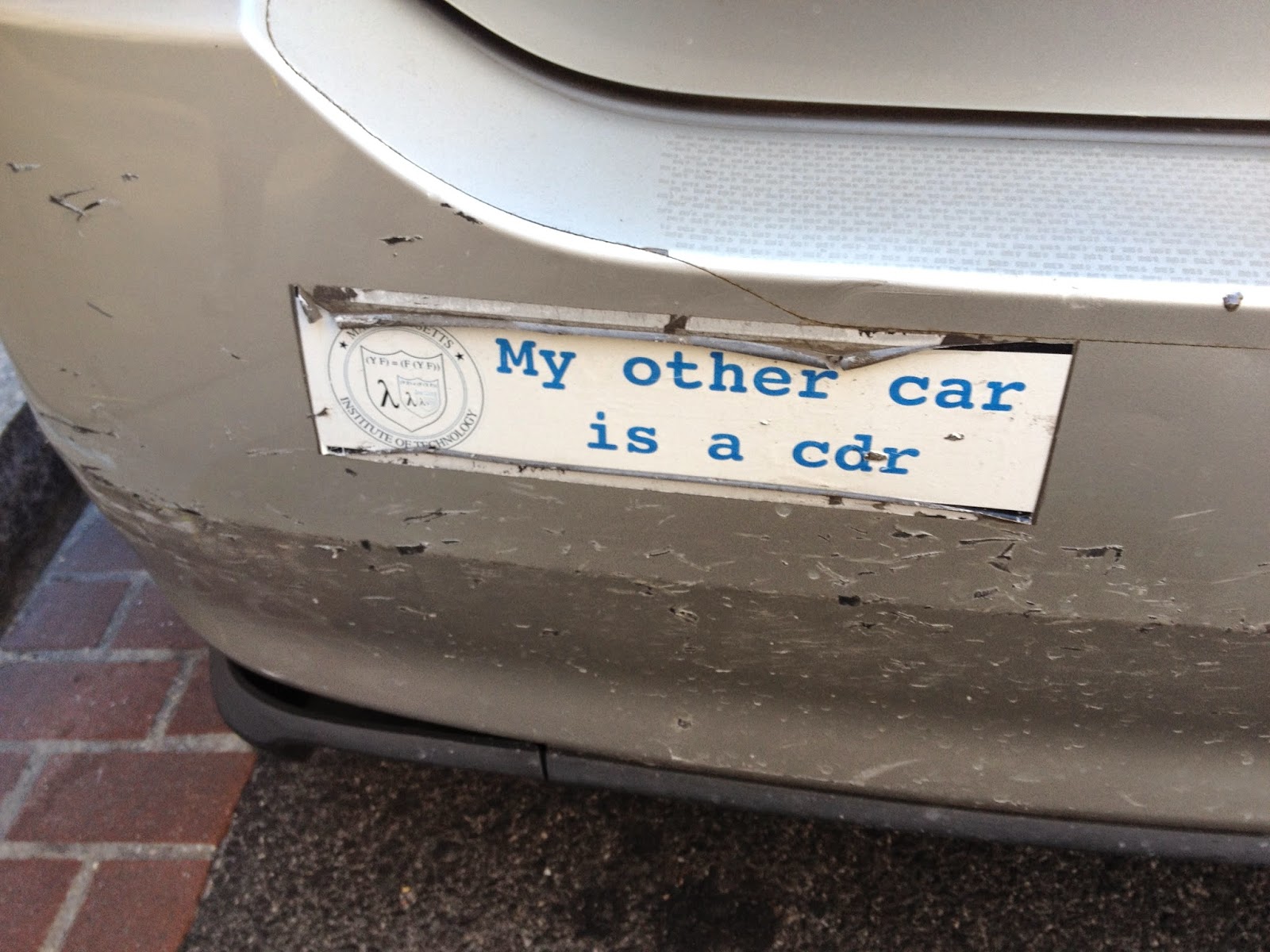 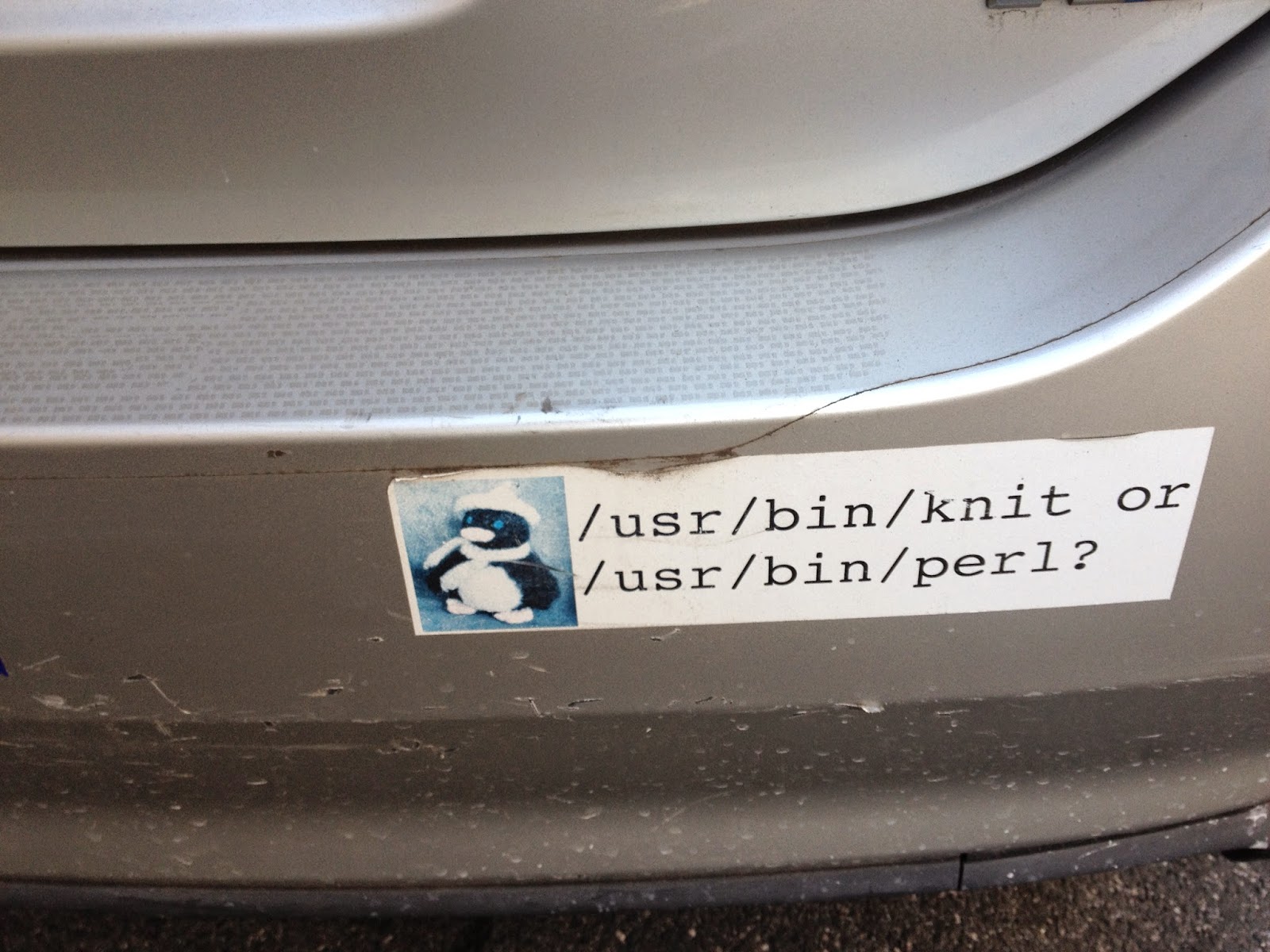 For those not immersed in the culture, a brief explanation. In the LISP programming language, "car" takes the first item in a list, "cdr" takes what is left over. The programming language Perl is ubiquitous on machines running UNIX and Linux; the pathname of the executable is generally /usr/bin/perl. This sticker seems to have Linux in mind, with a penguin dressed up in knitted hat and scarf.
Posted by George at 4:03 PM 1 comment:

"Emblematic" Come Back, All Is Forgiven

For about twenty years, I wondered whether I would live to see the popularity of the adjective "emblematic" fade. I had no fear that it would kill me, but it annoyed me, and it seemed to have more staying power than I felt in myself some days. So-and-so would be emblematic of such-and-such, usually meaning "typical" or "a fair example", and I would grimace as if I had cut my finger on the paper. But its popularity has fade over the last year or so.

Now we have "iconic". The Northwest Current has a caption describing the Kennedy Center as "one of the iconic Foggy Bottom landmarks to be featured on the [heritage] trail." The Kennedy Center is certainly recognizable, which I suppose is what they mean; though how a landmark could not be recognizable, I don't know. I hear of iconic books, poems, and songs, meaning important or excellent ones. But why iconic? The poem that I can think of off-hand that I'd be willing to call "iconic" is the section of "Among Schoolchildren" beginning "Both nuns and mothers worship images".

Still, I can think of a landmark in Washington that is in its way iconic. The National Presbyterian Church has a "Chapel of the Presidents", the stained glass windows of which depict various presidents rather abstractly. I don't believe that Presbyterians recognize the place of icons in worship, and I doubt that even Steven Ambrose would say that Dwight David Eisenhower was a saint; but say this for his window: it is Ike-onic.

Posted by George at 6:06 PM No comments:

Today's XCKD brings to mind Wilfrid Sheed's essay, "A Few of My Favorite Sins", collected in Essays in Disguise:


Naming the deadly sins is uncannily like trying to remember the seven dwarfs. The first person to say "Doc" three times figures he's made it. (In my own case, the Taj Mahal serves the same purpose for the Seven Wonders of the World.)

In the case of the sins, I can always fall back on the acronym "Saligia", thanks to Czeslaw Milosz's essay of that name in To Begin Where I Am. A bus driver at Disney World told us all a handy way of remembering the dwarfs names, something involving categories (moods was one, comprising at least Grumpy); but that was a while ago, and I've forgotten.

Still in There Punching

With a notion for a post not yet written, I went to the University of Toronto's wonderful Representative Poetry Online site. The poem for the day was "There was a young lady of Riga", which I remember from long ago as "There was a young lady of Niger" (and Niger seems the better rhyme for tiger, but maybe not in Toronto). But what struck me most was the attribution of the limerick, to "(Anonymous, 1100 - 2010)". He seems be suffering from writer's block lately, something that happens to poets younger than 900; still I trust he will back strong as ever.
Posted by George at 4:34 PM No comments: