Friday morning I happened to notice the route map at my usual Metro stop. I don't look at the schedule, for there is on average a bus every three minutes during the times I'm there, and any attempt at nearer precision is pointless. I had probably not noticed the map before because it faces a trash can, which one must lean over for a close look--at least, those of us must who don't have perfect vision. But even at a couple of steps back from the trash can, this looked wrong 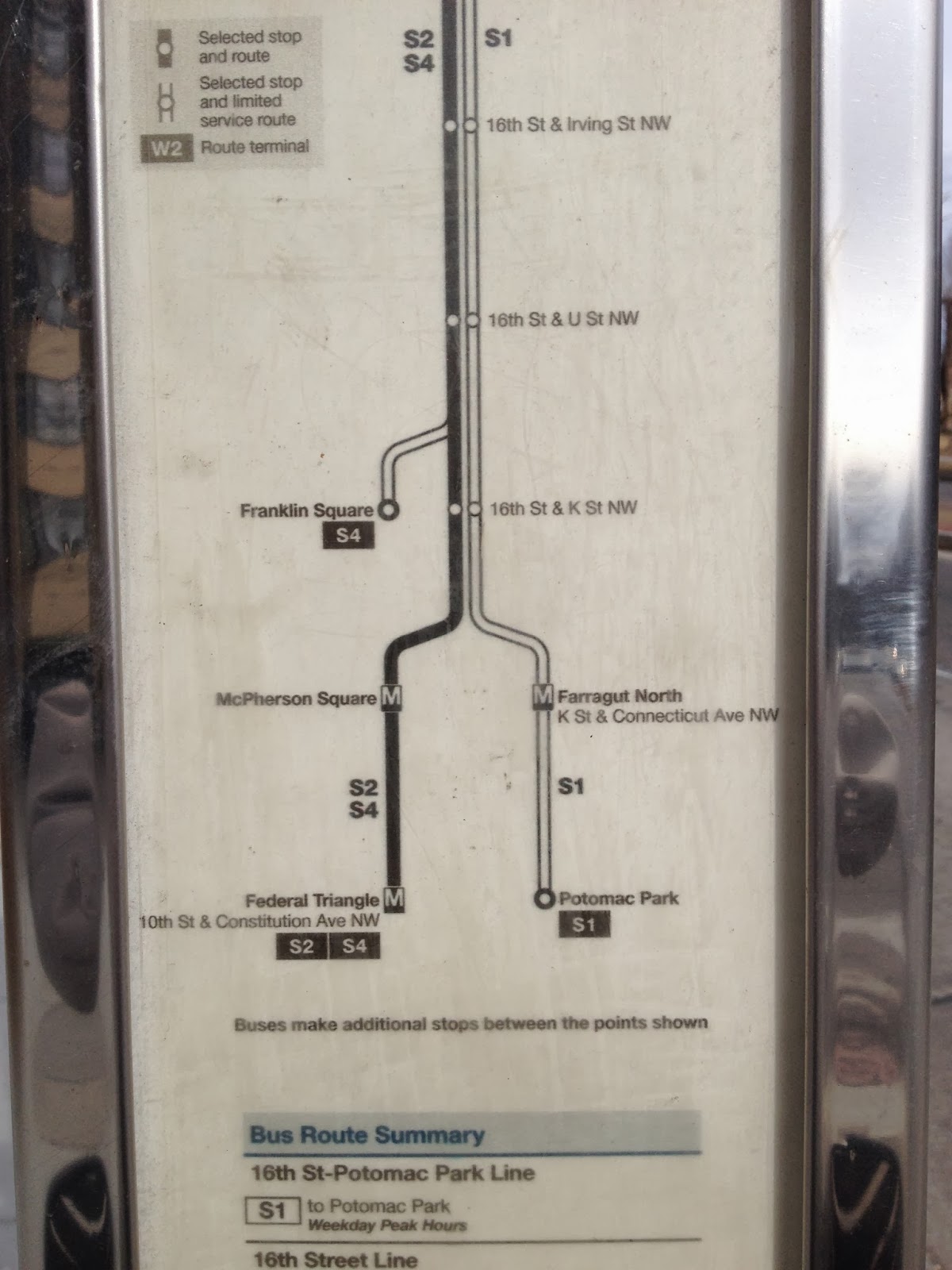 It shows Franklin and McPherson Squares to the west of 16th St., Farragut North Metro station and Potomac Park to the east. It also suggests that Franklin Square is to the north of Farragut Square, when in fact both are bounded on the north by K St. and on the south by I St. I looked again today, and saw the same map at stops  from V St. to Newton St.

At Newton St. it occurred to me to check the map for the northbound side. These maps have south at the top of the map, but then east is appropriately on the left.

As a schematic the southbound map is fine. The S1 bus will take you past Farragut Square and on to Potomac Park. As a map it is confusing.

Posted by George at 5:18 PM No comments:

It strikes me that life and books are more exciting when one tries to understand life and books by the light of those books. They are more exciting the way that riding a roller coaster or falling down the steps is exciting--you really aren't in control of what is going on. It is more profitable to read books by the light of life, but it takes years of living that you haven't yet done when you are young. I did not know this when I was 20, of course, but I might have suspected it--I've tended to be wary of books that attract me too much. I wondered about Stoner when I read it, a novel about an unhappy English professor. I could have seen myself teaching English, and certainly I had a talent, as most of us do, for unhappiness; did that make me overrate the novel, I wondered.

(Thanks to Rita Byrne Tull's post for bringing these thoughts to mind.)
Posted by George at 3:06 PM No comments:

It was well worth seeing, with art and objects from pre-Christian times through the very late days of the empire. There are of course many icons, there are some mosaics. There are liturgical objects such as chalices, patens, and chalice covers. There are coins, jewelry, and grave markers.

One stand has assorted books under glass: an Odyssey, the Gospels of St. Matthew and St. John, an illustrated "Alexander Romance." St. John's Gospel is open to the beginning, in a very clear script. Of St. Matthew I could make out not a word; the Odyssey, its title apart, appeared to written in a minute shorthand. The most obvious writing on the Alexander Romance is in Arabic, or at least Arabic characters.

I had heard of the Alexander Romance in Peter Green's biography of Alexander the Great, without giving it much thought. But the oddest item in the exhibition illustrated Alexander's apotheosis, according to this romance. He is borne up to the heavens by two starving griffins; he holds out chunks of meat on skewers just beyond their reach to motivate them. You can imagine my disappointment when I found that this was not shown on any of the postcards for sale.
Posted by George at 5:41 PM No comments:

E.M. Forster, Since You Asked

In a long-ago college class, a friend of mine objected to Howard's End. He had been taking a class on the literature of women--as the only male, brave soul--and did not believe in Forster's women. I had enjoyed the novel, and didn't know whether or not I believed in the women.

Ten years and two novels later, I was still not sure whether I believed in the women, but I did not care for Forster. I think that it was The Longest Journey that did it for me, and set me thinking about Howard's End  and A Passage to India. In particular, it was the scene revelation of Ricky's half-brother's birth.

I dislike in Forster his treatment of marriage, as disproportionately solemn, in books where anything else whatever is treated lightly and skeptically. It is as if one were reading Voltaire to the sound of harpsichord music, when sudden an organ breaks into Mendelssohn and a dull clergyman is reading his sermon on the text "For marriage is an honorable estate." One infers quickly that the cleric is not married; nor has he, like Dupanloup, "heard confessions in the provinces"; he has an abstract and innocent notion of it.

Could you argue that this is hardly Forster's fault, that the laws prevented his writing about the relationships that truly interested him? Sure, and I will regret with you the novels that were lost. But I can only go on those I have read.

Secondarily, I think poorly of the whimsy. You see it in "The Celestial Omnibus" and in one of the stories that Ricky Elliot is said to have written. I don't know what got into the the writers of that period that they had to turn out such stuff. But Saki did, Kenneth Grahame did, and to judge by Max Beerbohm's "Hilary Maltby and Stephen Braxton", quite a few others did.

Posted by George at 4:07 PM No comments:

We do not cook that much with spices, so it can be a surprise when I have to sort through the spice drawer. (Why drawer, and not rack? That's just the way the kitchen is.)

For example, why two bottles of fennel seed. I can't remember the last time we cooked with it, and I don't think my wife cares much for the taste. Why two bottles of cloves? I thought that we were fairly low on peppercorns, yet here is one bottle, low, and two mostly full. And when did we cook with garlic powder and onion powder, and why did the cap on the former not get back on securely?

I had time to consider this while looking for the bay leaves. They were in the front left corner beside the Bavarian Seasoning (again, what?), evidence of the effort made at least a year ago to put the bottles in alphabetical order. The order is not well preserved past that corner, though.
Posted by George at 5:20 AM 2 comments:

According to today's Washington Post, the District of Columbia has used 24,000 tons of salt on the roads since November. I don't suppose that we've had more than six inches of snow in that time. The result is salt everywhere. It bounces from the street to the sidewalk. We track it into the house. Today I vacuumed the doormat rather than shake it over the porch rail, in hopes of sparing the shrubs. The 4100 block of 17th St., NW, which is the last block of a long downhill stretch, has a thin drift of salt most of its length, about six inches wide. Friday morning I saw a worker at 18th and N Sts. NW using a leaf blower to clear salt dust from the sidewalk.

The forecast is for rain tomorrow. I hope it will clear the streets, and rinse the curbside grass and trees.