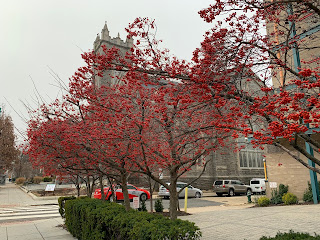 Today I saw on the side of a Metrobus an advertisement reminding the young of their duty to register with the Selective Service. It seemed to me that the last men drafted into the US military must have been born in 1953. On getting back to a computer, I looked it up, and found that
Those due to register next year are therefore fifty years younger than the last men drafted. The Pentagon has been quite clear for many years that it has no interest in expanding the military to a size that would require a draft. Yet the young must still register, and penalties attach to a failure to do so. The Selective Service's FAQ says that


Registration is a way our government keeps a list of names of men from which to draw in case of a national emergency requiring rapid expansion of our Armed Forces. By registering all young men, Selective Service ensures that a future draft will be fair and equitable.

Well, maybe. The WW II draft was more or less fair and equitable, but then the US military had something around 14 million in uniform from a much smaller population--the 1940 census counted 132 million persons.
Posted by George at 2:24 PM 4 comments:

Monday's New York Times has an article on Amazon Web Services (AWS), its ubiquity, and its effect on software providers. It writes of Amazon in the tone which twenty years ago people wrote of Microsoft. I did not see "embrace, extend, extinguish" in the article, but maybe I didn't look closely enough.

Amazon has identified a soft point in "open source" software: it is in general freely available for anyone's use, it is in principle freely available to be modified and extended; but this can mean that the advantage goes to the user with the most hardware, and the one with the most money to fund the adaptation and enhancement of existing products. These days, Amazon might well have the most hardware and the most money. Those who developed MariaDB, MongoDB, and Redis get a smaller share of the revenue generated from their work than Amazon does.

Yet for one who has followed this for some years, there are omissions in the picture. IBM has run Linux virtual machines (VMs) on its mainframes for many years, and has recently purchased Red Hat, which makes one of the most popular Linux distributions. During the years before the purchase, did Red Hat or IBM make the most money from this? Nor are IBM and Amazon the only companies that have made money off Linux: Google, Oracle, Facebook, and these days Microsoft run a lot of Linux. Does anyone consider any of these corporations more benevolent than Amazon?

Google based its Android operating system on Linux. If you set up an application on the Google Cloud Platform and need a database, one of the options you will have is MySQL, from which MariaDB is derived. (To be sure, at the moment the entities most scared of Google in the cloud world are its customers, who believe that it has considered abandoning GCP and could do so if it can't outdo AWS.)

I find Amazon's tactics troubling, and not only in cloud computing. Still, I thought the article could have used some nuance.

A few times, over the years, I have been passing by Carter Barron when the carillon at the Presbyterian church opposite was working. The first time, I was nearly out of earshot before I recognized the tune as that of "A Mighty Fortress Is Our God". The next time, I quickly recognized "Faith of Our Fathers". Now, I don't know what a classically Presbyterian hymn would be, but I was interested that they drew on the Lutheran and Catholic traditions.

My interest in this really began years ago, when happening to be in a Lutheran church, I noticed that the hymnal, and maybe the service, included a text by Peter Abelard. Since then, whenever I happen to be in a strange church, or near a new hymnal, I have a look for ecumenical borrowings. Owing to a falling off in weddings and graduations, I seldom have a chance to look now. It seemed to me that
This weekend, in a Methodist church for a concert, I had a chance to browse the United Methodist hymnal. It was about as I expected: Brebeuf and Faber were there, also Abelard and Bernard of Clairvaux though not Aquinas. At the end of the list of sources, I was interest to see "Wotyla, Karol: see John Paul II"--a litany for peace.
(Is it cheating to count as Catholic the hymns from before 1517? I think not, at least in the case of Abelard and Aquinas: both did a great deal to fit Aristotelian thought into Christian theology, and Martin Luther did not approve of Aristotle.)

On the other hand, the (Catholic) International Commission on English in the Liturgy (ICEL) does take only so many Protestant hymns. In Worship, there are seven by Charles Wesley, six by Isaac Watts, and three by Martin Luther, one by Alexander Means. By comparison, Richard Haas, who must be known mostly to choirmasters and the obsessives who read the matter in the back of Worship and Gather, has something like 30, as does Rory Cooney, though some of these must be psalm settings.

One sees, in looking through the hymnals, that there are only so many periods that have produced great hymns. There are notable Latin hymns from the high Middle Ages and before. The Reformation, particularly the Lutheran portion, produced some remarkable hymns, as later did the early Methodists and the American "Great Awakening". But  there are long periods that produced nothing memorable. In the United States, the later 19th Century produced a lot of Protestant hymns that one charitably might call "indifferent", and I don't know that the English contributions of that day were consistently better. A Catholic friend, an amateur of musicology, says hard things about the St. Louis Jesuits, who produced some of the hymns that linger on in American Catholic churches. Nor are they the only offenders in Gather and Worship.

Posted by George at 2:42 AM No comments:

Over the Door and in the Pews

'This is the door of the Lord', they wrote on the lintel of a church in Numidia, 'the righteous shall enter in.' 'The man who enters', however, wrote Augustine, 'is bound to see drunkards, misers, tricksters, gamblers, adulterers, fornicators, people wearing amulets, assiduous clients of sorcerers, astrologers. . . . He must be warned that the same crowds that press into the churches on Christian festivals, also fill the theatres on pagan holidays.'

The chapter concerns the beginnings of Augustine's controversy with the Donatists. As Brown remarks, the Donatist concern for purity of the church had somewhat less to do with the present behavior of the congregation than with the previous behavior of clergy during a persecution.
Posted by George at 6:35 PM No comments:

According to a recent article in the New York Times, German scholars are working steadily away on a Latin dictionary, the Thesaurus Linguae Latinae (T.L.I.) and hope to be done by 2050. I don't think that an actuary would advise me to subscribe. The dictionary aims to catalogue every way that a word was used between the earliest recorded Latin and about 600 A.D.

If the current eighteen volumes average three inches in thickness, that would amount to four and a half linear feet.  I wouldn't mind having a better Latin dictionary around the house--I regret one not bought a few years ago at a sale. But this is so far beyond any use I might have that I can admire the project but can't covet the product.

Posted by George at 5:10 PM No comments: