I had never before spotted the metal tags on the trees along the west side of Lafayette Square, yet clearly they have been there for a while. This is not a "wow" oak, it is a willow oak, but the growth of the tree has bent the tag: 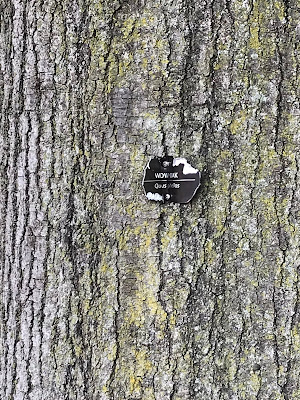 On the tree beside it, the folding has gone farther, so that the tag is barely visible: 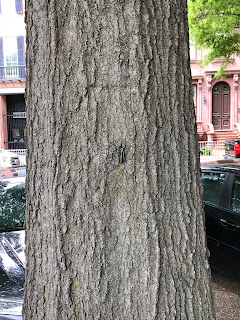 On the young, slim gingkos next just up from the oaks, the tags are still flat and wholly legible.
Posted by George at 4:22 PM 2 comments:

I'd Buy a Ticket


The twentieth-century philosophers whose names are inseparable, Ludwig Wittgenstein and Bertrand Russell, were such a great double act that there simply has to be a buddy movie sooner or later. At last, the material is all set to be licked into a script. Ray Monk has now matched his justly lauded biography of Wittgenstein with a fat and equally enthralling first volume wrapping up the earlier half of Bertrand Russell's long life--Bertrand Russell: The Spirit of Solitude 1872-1921--and is sitting on the hottest Hollywood prospect since Paul Newman and Robert Redford signed on for Butch Cassidy and the Sundance Kid.

James predicted that all the A-list male stars would wish to play Wittgenstein, but that


Nobody bankable--not even Steve Martin, a philosophy wonk who can actually explicate Principia Mathematica while wearing a plastic arrow through his head--will want to play the physically unappealing Russell, so the way should be clear for the perfect choice: Gene Wilder. Fluctuating uncontrollably between idealism and disillusion, forever persuaded that sexual fulfilment is at hand in the form of a luscious girl in a red dress, Wilder's person, like his appearance, exactly fits a part that should revive his career. The only strike against Wilder is that even he has too much gravitas for the role.

In the postscript attached to the essay in Cultural Cohesion: The Essential Essays (2003), James added


My idea for a movie about Russell and Wittgenstein was meant to depend for its effect on its manifest absurdity. But a Hollywood producer was on the the phone the week after the piece came out, talking large talk about writing a treatment. Since then I've heard nothing, which I suppose is a relief, because it was evident that he wanted to make the kind of comedy that says it's a comedy up front, like Nuns on the Run. I probably put him off when I told him the truth: as Russell proved, it isn't funny unless you play it straight.

Posted by George at 6:55 AM No comments:


Now when I see how this unbelieving age so diligently finishes the Gothic churches left uncompleted by the believing Middle Ages, it seems to me as if were desired to embalm a Christianity that has expired.

Schopenhauer did not much care for Gothic architecture, "the negative pole of architecture, or  even its minor key." He offered his reasons for the judgment, summarized by


For only the ancient style of architecture is conceived in a purely objective sense; the Gothic is more in the subjective. We have recognized the real, aesthetic, fundamental idea of the ancient architecture to be the unfolding of the conflict between rigidity and gravity; but if we try to discover an analogous fundamental idea in Gothic architecture, it will have to be that the entire subjugation and conquest of gravity by rigidity are there to be exhibited.

He did grant that the Gothic looks better from inside than the the classic does, and suggested obliquely that it was better suited to a northern climate that encourages one to go indoors.

After the Cherry Blossoms

The cherry blossoms peaked probably about the first of April this year. But more trees have been and are in flower.

About a week ago, I noticed that the serviceberry trees near the Kennedy Center were in full flower: 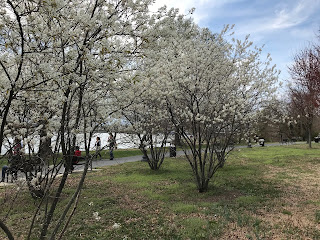 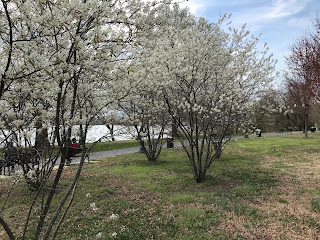 On our street, and in many places around town, the eastern redbuds are in flower: 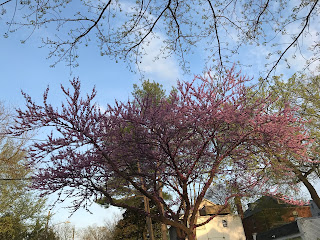 And the dogwoods are not yet at their peak: 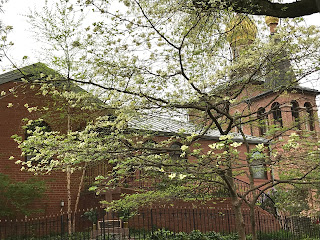 On Saturday I noticed a virburnum in flower near the Potomac above Reagan National Airport. The one in our yard looks to be about a week from flowering.
Posted by George at 4:38 PM 2 comments:

Behnke's is closing. For as long as I can remember, it has had the reputation of being the best nursery in the Washington area. My own direct acquaintance with it is fairly short; but for a while we have gone out once or twice a year to buy plants. I can point out a couple of plants that we have bought there, and my wife could point out many more.

The Behnke Nurseries Company has operated since 1930. The family has decided to close it, for reasons not given. I suspect that a large one is that the property will earn more when sold for development than it will as a nursery. I shouldn't care to commute to anywhere in particular from the Behnke's site, nor live quite so close to Route 1 and a busy train track; but there are many jobs in that direction.

There are other nurseries in the area, though the Johnson's Garden Center south of Tenley Circle closed last year. None have the space and selection of Behnke's, that I know of. The nearest comparable nursery that I have been to is  in the Harrisburg suburbs, about a hundred miles from here. We may end up driving there rather than to Beltsville.

In the meantime, everything is considerably discounted, until Behnke's closes in June.