After a quick trip to Oregon, I have decided that it is best to vacation to the east of one's place of work. Difficulties discovered when everyone gets to work in that time zone will occur when one is awake, alert, perhaps ready to take a break from hours of sightseeing. Those discovered in the afternoon can be dealt with in the morning, when the workplace is still dark.

Corvallis was hot, by local standards. To us it felt comfortable, with temperatures around what we had left in Washington, DC, but with very low humidity. The air cooled quickly after sunset, and there was a breeze. Newport, which we visited on Friday, was foggy and cool. I walked into the ocean water just far enough that my feet were wet and my ankles not, and considered that this was enough.

A large swath of Oregon will be in the path of totality during the eclipse of August 21. Everyone is preparing for an immense influx of tourists. A friend in Salem has rented out her apartment for one night at $1000. Oregon State University is putting tourists up in its dormitories, and letting them camp out on its fields. Smaller towns are wondering how everyone will get home--gas stations have only so large a tank, and small towns may have only one gas station. (People are thinking of calculations such as 1500 gallons/tank divided by 500 cars multiplied by 25 miles per gallon minus 100 miles to the average next stop. One hopes that the tourists will arrive with a fair bit of gas in the tank.) Everyone expects the worst traffic jam in the history of the state.

I would not mind seeing the eclipse, but I don't envy those who will have seen it and wish to get home. In 1999 we happened to be at Neuschwanstein during an eclipse. We hadn't known of the eclipse until long after we made our travel plans, and we thought little about it after the sky brightened. Having seen the castle we left, heading west in fast-moving traffic. Then, about Ulm, the traffic slowed considerably. In my recollection, we were in a traffic jam from Stuttgart to Mannheim. The cars traveled at about walking pace between rest stops and went stop-and-go past them. We got to our hotel in the Hunsrück very late.

I did not take many pictures this time, but here is a thistle on one of the streets near the OSU campus: 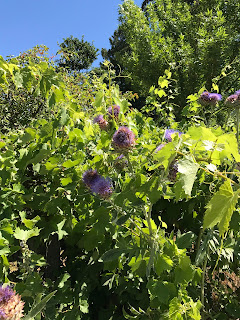 And here are some items to keep yourself entertained in the Interzone cafe across from campus: 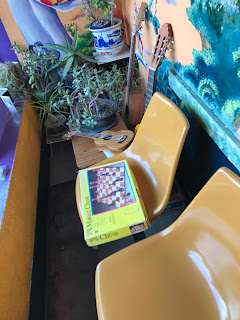 I wonder whether mediocre ukulele playing is tolerated as calmly as bad chess.